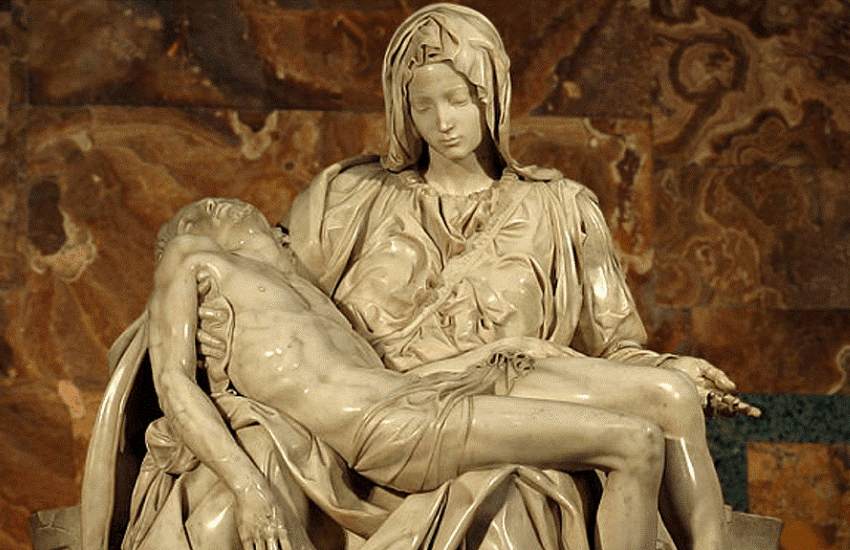 September 15, the Feast of the Seven Sorrows of the Blessed

Virgin Mary, is one of two days on the liturgical calendar dedicated to commemorating Our Lady’s sorrows. The other date is the Friday of Passion week.

Called by the Church, the Queen of Martyrs, St. Alphonsus de Liguori refers to Our Lady’s sorrows as a “new kind of martyrdom – a Mother condemned to see Her innocent Son die as a malefactor on an infamous gibbet”. In the death of Jesus Christ, the Blessed Virgin Mary “suffered a more cruel martyrdom than all other martyrs; for Her martyrdom was never equalled and was without relief.”

The Feast of the Seven Sorrows of the Blessed Virgin Mary

Devotion to the Mother of Sorrows dates back to the beginning of the Church. The first example is St. John at the foot of the Cross. This devotion was enshrined in Church history by the Gospel narrative of St. John – “Now there stood by the Cross of Jesus, His Mother…” (Jn. 19:25)

Though the devotion has always been part of Catholic piety, it was not until the 13th Century that the devotion of meditating on the sorrows of Our Lady began to flourish much more. In Florence, Italy seven holy men of noble birth left the city seeking solitude on Mount Senario and together formed a community dedicating their lives to prayer and penance. All seven had a strong devotion to Our Lady.

On Good Friday in 1239, while meditating on Our Lord’s Passion and Our Lady’s sufferings, Our Lady appeared to the 7 holy men and revealed to them Her wish for them to form an Order dedicated to practicing and promoting the devotion to Her Sorrows. These men became the founders of the religious Order of the Servants of Mary (or Servites) and are all canonized saints.

At Our Lady’s request, the seven founders made the object of their Order meditation on the pains suffered by Our Lady in the Life, Passion and Death of Her Son, Our Lord Jesus Christ, and undertook promoting this devotion of meditating on the Seven Sorrows of Our Lady to all Catholics, introducing the Chaplet (or Little Rosary) of the Seven Sorrows of the Blessed Virgin Mary.

Pope Benedict XIII, in 1724, promulgated and encouraged the practice of the devotion to Our Lady’s Sorrows when he bestowed many indulgences for the recitation of the Chaplet of the Seven Sorrows.

Let us thank Our Lady for all She has suffered on our behalf, by meditating on Her sorrows:

The Prophecy of Simeon
The Flight into Egypt
The Losing of the Child Jesus in the Temple
The Meeting of Mary and Jesus on the Way to Calvary
The Crucifixion and Death of Jesus
The Piercing of the Side of Jesus, and His Descent from the Cross
The burial of Jesus.

From The Glories of Mary by St. Alphonsus de Liguori:

St. Albert the Great said: “That as we are under great obligation to Jesus for His Passion endured for our love, so also are we under great obligation to Mary for the martyrdom which She voluntarily suffered for our salvation in the death of Her Son.” He said ‘voluntarily suffered’, since it was revealed to St. Bridget by St. Agnes, “our merciful and compassionate Mother was willing to endure any torment to save the souls of men.”

So great a love has our Heavenly Mother for us, that She deserves our gratitude, and that gratitude should be shown by at least meditating upon, and consoling Her in Her Sorrows. But She lamented to St. Bridget that very few did so, and that the greater part of the world lived in forgetfulness of them:

“I look around at all who are on earth, to see if by chance there are any who pity Me, and meditate on My Sorrows; and I find that there are very few. Therefore, My daughter, though I am forgotten by many, at least do you not forget Me. Meditate on My Sorrows and share in My grief, as far as you can.”

Our Lord Jesus Christ revealed to Blessed Veronica of Binasco, that He is more pleased in seeing His Mother compassionated than Himself. He said to her:

“My daughter, tears for My Passion are dear to Me; but as I loved My Mother Mary with an immense love, the meditation on the torments which She endured at My death is even more agreeable to Me.”

Therefore the graces promised by Jesus to those who are devoted to the sorrows of Mary are very great.

Pelbart relates that it was revealed to St. Elizabeth, that after the Assumption of the Blessed Virgin into Heaven, St. John the Evangelist desired to see Her again. The favor was granted to him; and Mary appeared to him accompanied by Her Son. The saint then heard Mary ask Jesus to grant some special grace to all those who are devoted to Her Sorrows. Our Lord promised Her four principal ones:

First, that those who before death invoke the divine Mother in the name of Her Sorrows will obtain true repentance of all their sins; Second, that He will protect all who have this devotion, in their tribulations; Third, that He will impress on their minds the remembrance of His Passion, and will reward them in Heaven for their devotion; Fourth, that He will place such devout servants in Mary’s hands to do with them as She wishes and to obtain for them all the graces She desires.*

“The grief of Mary was so great that, were it divided amongst all men, it would suffice to cause their immediate death. …St. Bernardine of Sienna

“The Passion of Jesus began with His birth. So also did Mary, in all things like unto Her Son, endure Her martyrdom throughout Her life.” …St. Bernard

Devotion to the Immaculate Heart of Mary is the main focus of the Message of Fatima.

*There are also seven promises attached to the practice of daily praying seven Hail Mary’s while meditating on Our Lady’s Tears and Sorrows.