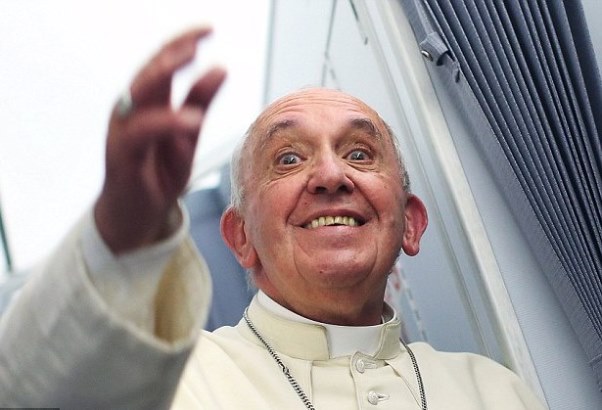 No Easter this year, either!

According to America magazine, a liberal Jesuit broadsheet disguised as a respectable “review”, Pope Francis has been “distancing” himself from the CDF’s (Congregation for the Doctrine of the Faith) recent statement negating the idea of “blessings” for sodomy labeled “gay marriage.” America cites Francis’s Angelus address of March 21, wherein — for the umpteenth time — he declares that preaching the Gospel means “sowing seeds of love, not with fleeting words but through concrete, simple and courageous examples; not with theoretical condemnations but with gestures of love.” What these “seeds of love” are supposed to be is less than clear, but the phrase happens to be the title of a retro-hippie rock song by the band Tears for Fears. And what but retro-hippies are the octogenarian clerics who cling to the memories of Vatican II like the secular hippies who cling to vinyl record collections in their attics?

But I don’t see Francis “distancing” himself from what the CDF has declared. Ever the wily politician, he must sense that if the Church were to permit “blessings” for “unions” based on sodomy, whatever remains of the Church’s moral capital would be squandered. Then there would be nothing left to invest for the causes most dear to this Pope: not just militant environmentalism and its demand for “ecological conversion,” but now also militant Covidianism and its demand for the Great Reset that Francis is now openly promoting with voluptuous abandon, including its “sacramentals”: the Sacred Mask, the Sacred Jab and the Holy Lockdown.

There is no shame in a little adultery, a little breaking of the “rule,” as Francis infamously declared in ¶ 305 of Amoris Læatitia, “A subject may know full well the rule, yet have great difficulty in understanding ‘its inherent values’, or be in a concrete situation which does not allow him or her to act differently and decide otherwise without further sin.” Yes, you can keep sinning if your situation is such that otherwise you would commit more sin. Utter moral nonsense, of course. But there is plenty of shame and no excuse — no “concrete situation” that exempts you from the “rule” — if you will not wear the Sacred Mask and take the Sacred Jab. Quoth Francis:

That Francis himself wears a mask only for ceremonial purposes and is more often seen without one, as even America observes, is beside the point: The point is the principle of submission to the State by the masses, which the Sacred Mask (like the Nazi armband) represents. Which is why Francis also demands submission to the Holy Lockdowns that have probably caused many of the deaths attributed to COVID-19 by forcing people indoors, where viruses are commonly transmitted, and imprisoning the infected residents of nursing homes where they are cut off from all contact with loved ones as they spread the virus to all the residents, resulting in a “silent massacre” of the elderly. Not to mention the destruction of countless livelihoods, widespread depression, suicides, and who knows how many preventable deaths on account of deferred medical exams and treatment while COVID mania coopted the entire medical system.

In my last column I noted that I have not paid much attention to what Francis has to say of late because he has little, if anything, to say about the integrity of Faith — which it is the Pope’s responsibility to defend — but a great deal to say about matters beyond his competence which are none of this business, including masks, vaccines and lockdowns. Because of which Francis, ever obedient to the secular state, declares that the Vatican will be closed to the faithful for the second Easter in a row. In this pontificate, the highest good is not giving glory to God on the highest Holy Day of the liturgical year, but rather avoiding, out of superstitious fear, a virus with an infection survival rate of 99.98%. (By the way, in Italy, population 60,000,000, there were a grand total of 297 deaths attributed, however loosely, to the virus as of March 21.)

So, there we have it: the first en-viral-mentalist papacy in the history of the Church. Another unprecedented sign of the unprecedented crisis in both Church and State.