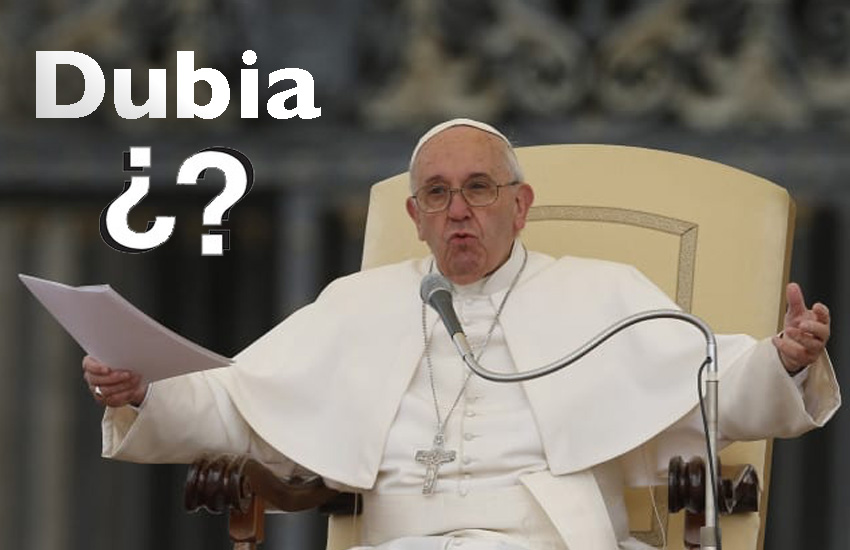 Pope Says ‘No’ to “Women Priests” and “Blessings” for “Homosexual Unions” — Sort of.

After a long hiatus largely taken up with civil rights litigation on behalf of Catholics and others against the blatantly unconstitutional COVID-19 lockdowns in New York, New Jersey and California, I am happy to resume these Fatima Perspectives on affairs in Church and State.

I haven’t paid much attention to Pope Francis of late, as it seems he has very little to say about the Catholic Faith as opposed to an endless commentary on political questions, including even the “carbon tax” — all quite outside the ambit of papal competence. He generally takes the line of the global Left, as even the Wall Street Journal has noticed. Nothing new there, and so nothing new to write about.

But in recent days Francis has made a couple of moves in the direction of orthodoxy, evidently in response to the antics of the out-of-control German hierarchy, which is in the midst of a seemingly endless synod whose aim appears to be the transformation of Catholicism in Germany into a liberal Protestant sect.

In the first move, on January 10, Francis issued a motu proprio (“by his own hand”) entitled Spiritus Domini, wherein he modifies Canon 230 § 1 of the Code of Canon Law to allow “the access of women to the established ministry of the Lectorate and the Acolyte.” Pope Paul VI having abolished those two minor orders, reducing them to non-ordained ministries — one of his many reckless decisions — Francis now allows women to be admitted to the non-ordained “ministries” of Lector and Acolyte. (An acolyte is not an altar boy but rather a liturgical assistant to the priest, who can do such things as tend to the altar and sacred vessels and expose the Blessed Sacrament on the altar for adoration.)

So now we will have women parading around in liturgical garb, as if they were ordained ministers, but without being ordained. The only good news here, which is quite significant, is that in his letter to the bishops explaining Spiritus Domini, Francis quotes John Paul’s infallible pronouncement against the ordination of women: “[W]ith regard to the ordained ministries, the Church does not consider herself authorized to admit women to priestly ordination (cf. Saint John Paul II, Apostolic Letter Ordinatio sacerdotalis, 22 May 1994).” But, according to Francis, “for the non-ordained ministries it is possible, and today it seems opportune to surpass this reservation.” So, along with altar girls, the presence of women lectors and acolytes will effectively close off two more traditional paths to ordination because, as has been the case with altar girls, females will predominate, and males will be discouraged from participation.

Next, on February 22, the Congregation for the Doctrine of the Faith (CDF) issued a document, specifically approved by Francis, addressing the following patently ridiculous dubium:
“Does the Church have the power to give the blessing to unions of persons of the same sex?” To which the CDF’s response was: “Negative.”

To employ the sarcastic American idiom: Ya think? Really now, has the state of discipline in the Church sunk so low that such a dubium could even be entertained by the Vatican’s chief doctrinal congregation? How about a dubium on whether the Church has the power to bless “unions” of couples living in adultery, or “unions” of couples living out of wedlock? Ridiculous, of course. But then why isn’t the dubium on blessings for “homosexual unions” even more ridiculous, indeed outrageous on its face, seeing that it involves a “union” based on the intrinsic evil of sodomy? How is it that illicit “unions” of homosexuals merit the serious consideration of a dubium regarding blessings, but not other illicit unions?

The implicit premise seems to be that “homosexual unions” are entitled to a certain respect not accorded to adulterous or extramarital unions between male and female. Why else would Francis have expressed his approval of “civil unions” for homosexuals — marriage in everything but name, including the right to adopt children — contrary to the teaching of his predecessors, John Paul II and Benedict XVI? In fact, the CDF’s Explanatory Note to its negative answer allows that such “blessings” are “not infrequently motivated by a sincere desire to welcome and accompany homosexual persons, to whom are proposed paths of growth in faith, ‘so that those who manifest a homosexual orientation can receive the assistance they need to understand and fully carry out God’s will in their lives.’” — quoting (what else?) Amoris Laetitia.

A “sincere desire” to bless sodomitical “unions”? But why only those immoral unions? Why is there no talk of a “sincere desire” to “welcome and accompany” those involved in illicit heterosexual unions? The disparity is telling. Another disparity: the reference to “homosexual persons,” seen here and in many other recent Vatican documents. But never any reference to “heterosexual persons.” Why? Because personhood does not reduce to sexual behavior when it comes to sexually normal people. But when it comes to persons inclined to what even the Catechism of John Paul II calls “intrinsically disordered” behavior involving acts of “grave depravity,” suddenly we have “homosexual persons,” as if their intrinsic disorder and depraved acts defined their personhood. Curious.

Laudably enough, the CDF declares that such “blessings” are not possible because God “does not and cannot bless sin” and therefore “the Church does not have, and cannot have, the power to bless unions of persons of the same sex…” But the CDF also apologetically remarks that “The presence in such relationships of positive elements, which are in themselves to be valued and appreciated, cannot justify these relationships and render them legitimate objects of an ecclesial blessing, since the positive elements exist within the context of a union not ordered to the Creator’s plan.”

How is it that, as to illicit sexual relations only, the Vatican is at pains to note “positive elements”? We owe this morally confusing novelty to none other than Francis in Amoris Laetitia (¶ 78), speaking of natural marriage and marriage in “other religious traditions” — that is, between a man and a woman. But now the CDF has extended this “positive elements” nonsense to sodomitical relations.

Let’s not describe these two developments with Lenin’s formula for communist subversion: two steps forward, one step back. Rather, they are more like two steps forward and one-and-three-quarter steps back. The truth has been affirmed but, yet again, in affirming what is true Rome has gratuitously yielded ground it did not have to yield, even if only rhetorically. And so it has gone for the past sixty years, with this slippage of position — lax rhetoric followed by lax practice that becomes endemic — contributing to the worst crisis in the history of the Church: the one indeed foretold in the integral Third Secret of Fatima.