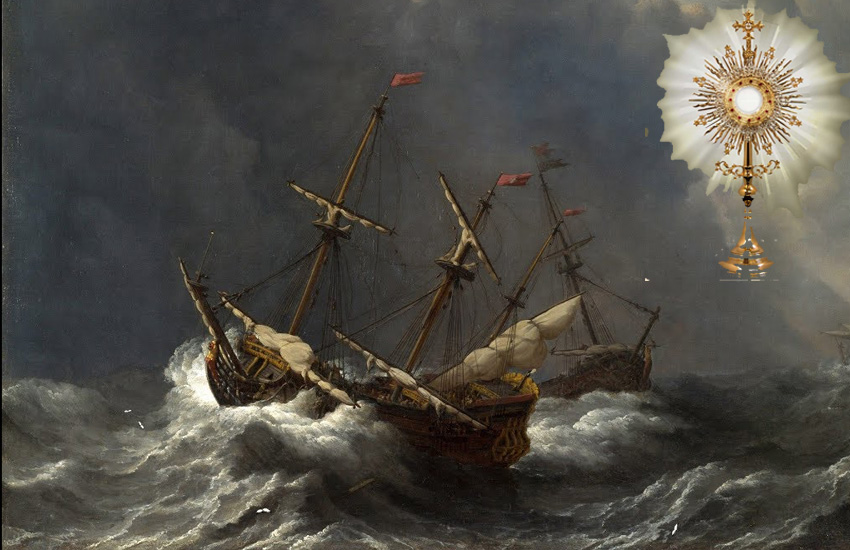 As the media-driven COVID-19 Panic of 2020 reaches its peak — while ignoring the millions of seasonal flu virus infections, hundreds of thousands of hospitalizations and tens of thousands of deaths from the flu in Europe and the United States — public Masses have been suppressed throughout the Catholic world.  Yet, in all the same places, one can still shop for groceries, order pizza to go, or drive to McDonald’s for greasy hamburgers dispensed in the drive-thru lanes by people who, if we are to believe the media accounts, have been exposed to “the deadly coronavirus.”  The same “deadly coronavirus” that thus far has not been fatal to even a tiny fraction of the number of those dying, right now, from seasonal influenza all over the world.

Now, there is nothing wrong with a bishop issuing a decree making Mass attendance optional during this panic, nor anything wrong — indeed it might even be prudent — with an episcopal directive that people at high risk for any virial infection must stay home. Catholics are not obliged to attend Mass at the risk of illness, even if the risk has been hyped absurdly by media talking heads and left-leaning politicians, who are grabbing power everywhere under the pretext of a “deadly pandemic” that is far less deadly than the annual flu.

But why the outright suppression of Masses, and the consequent total deprivation of Holy Communion, when there has been no deprivation of pizza, groceries or McDonald’s hamburgers anywhere? Only one answer seems possible: churchmen of the post-conciliar epoch have come to regard the administration of the Sacraments as a kind of business service rather than, on account of the graces made available, the very thing that is needed to obtain God’s blessings in the midst of a crisis such as this one, however manufactured it may be.

Think of this panic as a kind of shakedown cruise by which the Barque of Peter is being tested for its seaworthiness in the midst of stormy seas.  In this case, the vessel is leaking water from every part — not because Christ has failed His Church, but because so many pastors comprising her human element have failed in their mandate to carry out the divine commission.

This “shakedown cruise” has revealed even more starkly what has long been apparent: a widespread loss of faith among the hierarchy, or at least the courage borne of a living faith versus a mere intellectual conviction.  How ironic, in the midst of a pontificate that features almost daily condemnations of observant Catholics who, in the view of this Pope, lack a living faith.  But it is these Catholics who want the Mass while their spiritual leaders forbid it.  Including the Pope himself, who has reopened the churches after a public outcry while still approving the suppression of Masses throughout Italy.

And so it goes in the leaky Barque of Peter, which would have sunk by now if the Church were merely a human institution.  Sooner or later, however, Heaven will act to restore in full the seaworthiness of the great ship that Our Lord Himself launched on its mission as the sole ark of salvation.