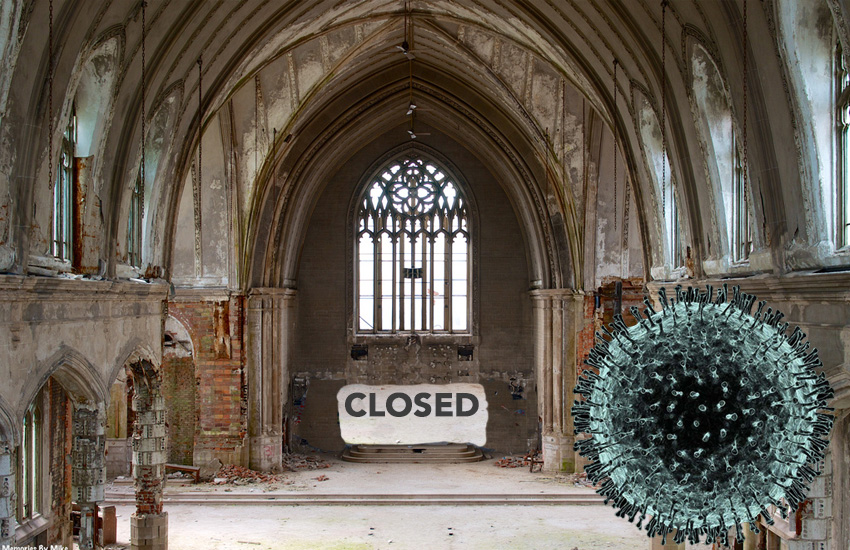 When the Church Becomes a Social Club, a Virus Shuts It Down

Item:   All Masses in Rome are suspended until further notice.

Item:   All Masses in Italy are suspended until further notice.

Item:   Easter and Holy Week are cancelled in Geneva, and all Masses are suppressed until further notice.

Item:   The Sunday Mass obligation is suspended throughout Austria until further notice.

Item:   The healing baths at Lourdes — irony of ironies — have been closed until further notice.

Item:   The Diocese of Pittsburgh has suspended the Sunday Mass obligation until further notice.

More of these ecclesiastical closings will follow as the Coronavirus Panic of 2020 disrupts the entire world based (as of this writing) on 5,000 deaths worldwide from COVID-19, 80% of which occurred in China, versus 95,000 deaths from the common flu during the same time period (January 1 to the present), which will likely rise to the annual average of around 600,000 flu deaths worldwide as the winter flu season begins in the Southern Hemisphere, where it is summer now.

Why are Catholic churchmen succumbing to this panic, particularly in Italy where there is no government order compelling churches to close despite an otherwise draconian “lockdown” imposed on the whole country by President Conte?  Antonio Socci has what I believe is the correct answer: “The tobacconist, the news agent and the pastry shop remain open, the churches do not; the churches where Masses have already been suppressed; the churches where only few faithful enter in dribs and drabs to say a prayer from today will be closed. Not by government decree, but by the will of Bergoglio.”

But then what is behind the Pope’s lockdown of the Church in Italy?  As Socci notes in an acerbic commentary, the same Pope who speaks of a Church that must “go out of herself” is now “literally barricaded in the Vatican for fear of the coronavirus” along with his cardinals.  “They who call themselves revolutionaries,” he continues, “are revealed as so many fearful Father Abbondios.” Socci is here referring to the character of Don Abbondio in the famed Italian novel I Promessi Sposi (The Betrothed), who refuses to perform a legitimate marriage because he has been threatened by Don Rodrigo, the corrupt nobleman who is the villain of the piece.

This, says Socci in words dripping with acid, reveals “the great hypocrisy of the ‘progressivist church’… Bergoglio said that pastors must take on the odor of the sheep, but he and the pastors have run off and now stand well away from the sheep.”  So much, Socci adds, for the other slogan of this pontificate: that the Church is “a field hospital.”  “As soon as the epidemic exploded, this field hospital disappeared without trace.”

And then there is Socci’s really quite stunning observation; one of those brilliantly obvious points only a real thinker discerns:  “The Bergoglian church decrees that for the faithful the Mass is finished and for the first time in two thousand years the country that is the heart of Christianity will remain totally, and for days, without the Mass.”  To be precise, Mass for the people, as priests will still say their Masses in private.

Here Socci evokes the prophecy of Daniel, who foretells a time when “the daily sacrifice is abolished and the abomination of desolation is erected.”  There is, however, a less apocalyptic — but apocalyptic still — explanation. It is the one proposed by Pope Paul VI in 1973:  “The opening to the world became a veritable invasion of the Church by worldly thinking. We have perhaps been too weak and imprudent.”  In that same year, the great Dietrich von Hildebrand, dubbed “a 20th century doctor of the Church” by Pope Pius XII, observed much the same thing: “the poison of our epoch is slowly seeping into the Church herself, and many have failed to see the apocalyptic decline of our time.” (The Devastated Vineyard, 1973, p. 75)

To put the matter rather jejunely: the Church invaded by worldly thinking has, in her human element, become a kind of social club, just like the man-made churches of the Protestants.  And when there is wild panic over a virus vastly less deadly than the common flu, the people who run the social club will close it and hunker down at home, forgetting the supernatural realties and divine promises of protection that underlie the pathetic worldliness that has replaced the glory and majesty and evangelical courage these dreary time-servers now ridicule as “triumphalism.”

Welcome to the final stage of the post-conciliar crisis in the Catholic Church, when a flu-like illness accomplishes what the Roman persecution of the Church in her infancy could not.   God only knows what will come next, before the Church is finally restored.