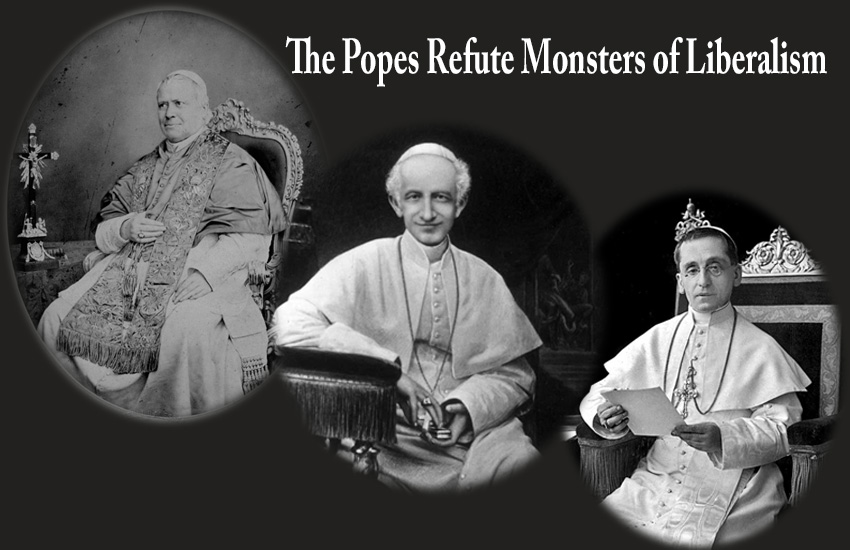 The Monsters of Liberty

What kind of man would cite Holy Scripture to justify the brutal murder of unborn children even at the moment they are being born — even as their very heads are emerging from the birth canal?  What kind of man would drag a nine-year-old boy up on stage during a political rally to give that poor child advice before the whole world on how to “come out” as “gay”?

Such a man would be a monster. And such a man is Pete Buttigieg: an apostate Catholic who pretends to have “married” another man, and whose self-assured, smugly glib defense of evil from the pit of hell bespeaks the reality that absolutely no one on the American political scene, not even so-called conservatives, has the courage to call him what he is.  Only Rush Limbaugh, who is dying of Stage 4 lung cancer, called into question (however obliquely) Buttigieg’s obscene “marriage” when speaking of the Democrats’ prospects for the next election, but he was promptly deluged with denunciations of his “homophobia.”

Buttigieg is only one of a vast legion of monsters spawned by the modern notion of liberty, which ultimately reduces to a rebellion against Christ and the Gospel that Buttigieg has the devilish audacity to cite in defense of his monstrous opinions, which are only those of the entire liberal constituency he represents.

The Popes who reigned before the debacle that was the Second Vatican Council foresaw in their wisdom the final outcome of the modern notion of liberty that Blessed Pius IX condemned in all its particulars in his Syllabus of Errors (still to be found on the Vatican website in Latin and Italian).  In 1914, that final outcome was predicted by Pope Benedict XV in the midst of World War I:

“There is another evil raging in the very inmost heart of human society, a source of dread to all who really think, inasmuch as it has already brought, and will bring, many misfortunes upon nations, and may rightly be considered to be the root cause of the present awful war. For ever since the precepts and practices of Christian wisdom ceased to be observed in the ruling of states, it followed that, as they contained the peace and stability of institutions, the very foundations of states necessarily began to be shaken. Such, moreover, has been the change in the ideas and the morals of men, that unless God comes soon to our help, the end of civilization would seem to be at hand.”

Some twenty-six years earlier, in his landmark encyclical Libertas (On Human Liberty), Pope Leo XIII identified the root cause of what he had already warned ten years earlier would be “final disaster” for human society:

“Men have a right freely and prudently to propagate throughout the State what things soever are true and honorable, so that as many as possible may possess them; but lying opinions, than which no mental plague is greater, and vices which corrupt the heart and moral life should be diligently repressed by public authority, lest they insidiously work the ruin of the State…. If unbridled license of speech and of writing be granted to all, nothing will remain sacred and inviolate; even the highest and truest mandates of natures, justly held to be the common and noblest heritage of the human race, will not be spared. Thus, truth being gradually obscured by darkness, pernicious and manifold error, as too often happens, will easily prevail….”

Mr. Buttigieg and those who think like him are monsters bred in the womb of modern liberty.  They are precisely the creatures Holy Scripture condemns: “Woe to you that call evil good, and good evil: that put darkness for light, and light for darkness: that put bitter for sweet, and sweet for bitter.” (Isiah 5:20) Public opinion in America and throughout the once Christian West is now dominated by those who call evil good, and good evil.  Just as Pope Leo XIII warned 132 years ago, “truth being gradually obscured by darkness, pernicious and manifold error, as too often happens, will easily prevail….”

But to recall what Benedict XV observed in 1914: “unless God comes soon to our help, the end of civilization would seem to be at hand.”  Three years later, God did come to our help.  He sent His Mother to Fatima to reveal His plan for peace in the world if only men would heed Her request for the Consecration of Russia, from which the worst moral evils of modern liberty — abortion, the decriminalization of sodomy, contraception and no-fault divorce — emanated like a global plague.

Our Lady’s request having been ignored, it may already be too late to avoid the chastisement we see depicted in the vision published in 2000, which the Vatican would have us believe is the whole of the Third Secret of Fatima. There is no doubt, however, that in the still-hidden text which must contain the Virgin’s own explanation of that enigmatic vision, we would learn the fate of the Church and the world before modern liberty has run its course and the inevitable Triumph of the Immaculate Heart ensues.

Until then, the monsters of liberty will be on the loose.  And it is our duty as Christians to call them what they are and to oppose them in any way we can.