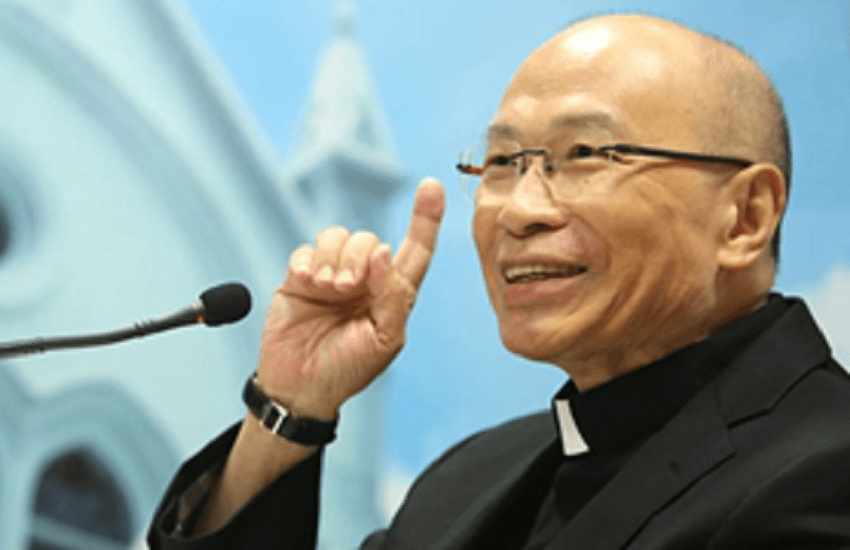 As the Catholic Herald reports, the Vatican has apparently agreed with the butchers of Beijing that one Rev. Peter Choy Wai-man (photo above) will be the new Bishop of Hong Kong, filling a vacancy that has existed since the death of Bishop Michael Yeung Ming-cheung of cirrhosis of the liver in January 2019.

Catholic News Agency (CNA) earlier reported that Choy’s elevation had been delayed “amid concerns that local clergy and lay Catholics will see Rev. Peter Choy Wai-man as too sympathetic to the Chinese Communist government.” Nevertheless, “Senior Church officials in Rome, Hong Kong, and mainland China have independently confirmed to CNA that a decision to appoint Fr. Choy as Hong Kong’s next bishop has received final approval in Rome.”

In addition to concerns about his pro-Beijing leanings, CNA reported that “Among Hong Kong Catholics… ‘There’s a concern about a lack of gravitas,’ a priest close to the Hong Kong chancery told CNA, saying that many would worry Choy would be unable to stand up for the Church locally.’”

Worse, according to CNA, “Another senior local cleric offered a more unsparing assessment of Choy’s reputation in Hong Kong, describing him as a ‘pro-Beijing hawk, and a sworn enemy of [Cardinal] Zen. His elevation is just further proof of how the Holy See is selling the faithful down the Yangtze, or in this case Pearl River’…”

Cardinal Joseph Zen Ze-kiun, of course, is the indefatigable opponent of the Vatican’s ruthless sellout of the Underground Church to a communist regime that persecutes the Church and presides over the mass murder of unborn children by state-coerced abortion.

“When the announcement is finally made, [Cardinal Zen] will go crazy,” said a source quoted by CNA.  And with good reason.  The earlier appointment for the Hong Kong episcopal see was, logically enough, its auxiliary bishop Joseph Ha Chi-shing. But Bishop Ha made the “mistake” of appearing in a crowd demonstrating against Beijing’s increasing encroachment on Hong Kong’s autonomy, which prompted the Vatican to reverse the appointment as unacceptable to Beijing’s communist tyrants.

CNA further reports that while Choy’s appointment had been delayed, “the Vatican could still reverse course if political circumstances don’t change, as it has once already for the same position.” And now it appears that the Vatican has done so and that Choy’s elevation is imminent.

According to the Catholic Herald report: “Vatican and Chinese authorities have agreed to Choy’s appointment, and concerns over a backlash among local Catholics have apparently subsided.”  As one source told the Herald, the coronavirus outbreak appears to have provided an opportunity to move ahead: “Now, with schools closed and public demonstrations much less on the agenda, there is a sense that the time is right.”

Just the sort of cynical move one would expect from the wizards of Vatican diplomacy: wait for a deadly epidemic to foist a communist-sympathizer bishop on the people.

CNA asked Vatican Secretary of State Cardinal Pietro Parolin to comment on Choy’s appointment. His spokesman said that Parolin had “no comments on Fr. Choy’s reported selection or on the timing of any announcement.” In other words, consider it done.  And with that appointment the sellout of Hong Kong will be coordinated with the sellout of the faithful Catholics of the underground on the mainland.

May Our Lady intercede to rescue the Catholics of China from the clutches of Beijing, the Vatican bureaucracy and indeed the Pope who presides over it.