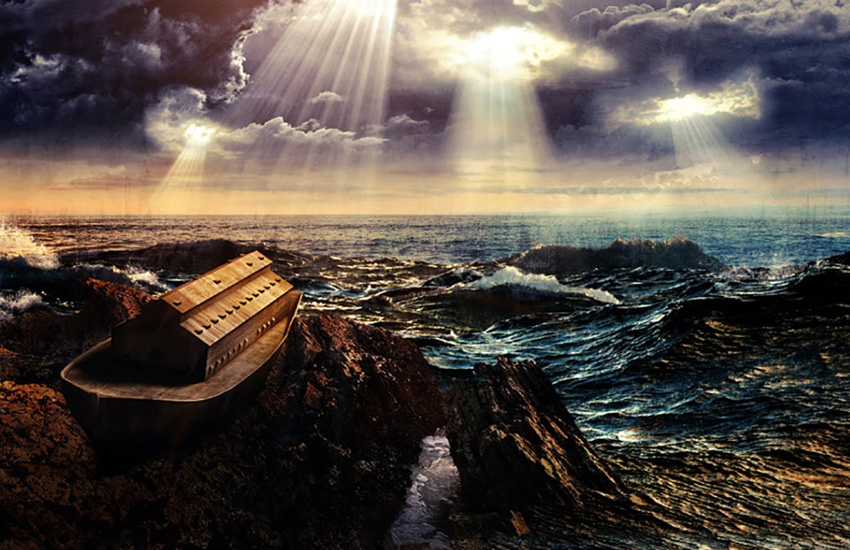 The Problem of “Conservative” Catholic Mythologizers: Part II – The Flood

As I noted in my first column of this three-part series, apart from the Creation narrative in Genesis 1-3, a favorite target of “conservative” Catholic mythologizers of Genesis is the account of the Flood in Chapter 7. Here we encounter not only a clearly literal historical account but also a record of what the Catholic Encyclopedia describes as “the tradition existing in all places and at all times as to the occurrence of a similar catastrophe” and indeed “the most universal tradition in the history of primitive man.” As the Encyclopedia concludes: “[W]e might as well consider the history of Alexander the Great a myth, as to call the Flood tradition a fable. It would, indeed, be a greater miracle than that of the Deluge itself, if the various and different conditions surrounding the several nations of the earth had produced among them a tradition substantially identical.”

Not content with reading the Flood account as true history, however, “conservative” Catholic sophisticates, cowed as always by the apodictic claims of evolutionary “science”, speculate that the Flood was a purely local affair and that it cannot be maintained with any certainty that out of all humanity only “eight souls, were saved by water,” meaning Noah, his three sons — Seth, Cham and Japeth — and their respective wives. So Saint Peter declared in alluding to the Flood as a literal historical event as well as an antitype of Baptism (1 Pet 3:20). Nor, they say, can we take Our Lord Himself literally when He refers to the Flood as both an actual event and the antitype of His own Second Coming:

“For as in the days that were before the flood they were eating and drinking, marrying and giving in marriage, until the day that Noah entered into the ark. And knew not until the flood came, and took them all away; so shall also the coming of the Son of man be.” (Matt 24:38-39)

“They did eat and drink, they married wives, and were given in marriage, until the day that Noe entered into the ark: and the flood came and destroyed them all.” (Lk 17:27)

As Robert Sungenis commented in conversation with me, the account of the Flood can hardly be explained away as an allegory or folklore because “it is written like a newspaper.” For example, as we read in Genesis 7:20: “The waters reached their peak fifteen cubits above the submerged mountains.” Likewise, we read also that the Flood began to abate in 150 days (Gen 8:3); that the Ark came to rest upon a mountain in Armenia on the twentieth day of the seventh month from the beginning of the Deluge (Gen. 8:4); that Noah sent forth a raven from the Ark, which did not return, and then a dove, which did return (having found no place to land) and which Noah caught in his hand “and brought… into the Ark” (Gen 8: 6-9); and that the same dove, released again seven days later, returned with an olive branch, thus signaling that “the waters were ceased upon the earth.” (Gen 8: 10-11)

Now, if these patently non-metaphorical and quite literal details were false, then Genesis 7-8 would be essentially a kind of fairy tale whose author embellished his tale with invented facts that are simply false history. But that conclusion is impossible given the divine inspiration of the Mosaic text—which certainly was produced by Moses, contrary to Modernist pseudo-exegesis.  To quote Pope Leo XIII in his landmark encyclical on the inerrancy of Scripture:

For all the books which the Church receives as sacred and canonical, are written wholly and entirely, with all their parts, at the dictation of the Holy Ghost; and so far is it from being possible that any error can co-exist with inspiration, that inspiration not only is essentially incompatible with error, but excludes and rejects it as absolutely and necessarily as it is impossible that God Himself, the supreme Truth, can utter that which is not true.

Moreover, if the Flood did not destroy all of humanity with the exception of “eight souls, saved by water,” then Noah would not be, as Scripture and all of Tradition attest, the second father of humanity after Adam, the first father. Neither would the various races of men have descended from Seth, Cham and Japeth—giving rise, not coincidentally, to the three commonly accepted human taxa: Caucasian, African and Asian, which groups dispersed throughout the world following the incident at Babel (the subject of my next column). Nor, given the supposedly fabulist nature of the initial genealogy proceeding from Adam, could one view as reliable the entire subsequent genealogy that traces the line of salvation history from Noah to Abraham (3000 to 2000 B.C.), Abraham to Moses (2000 to 1500 B.C.), Moses to King David (1500 to 1000 B.C.), King David to Daniel (1000 to 500 B.C.) and Daniel to the time of Christ (500 B.C. to 1 A.D.). (Cf. Luke 3 and Matthew 1, which present a vast exegetical subject I cannot even touch upon here.)

In which case, one could not view as true history the New Testament’s presentation of Christ and the Jews as the “seeds” (descendants) of Abraham, or Christ as the fulfillment of God’s promises to Abraham (whose fulfillment the Pharisees refused to recognize), or Christ as the realization of the type of the Messiah whose antitype was King David, in whose line Christ, the King of Kings, stands. Out the window as well would go the historical veracity of the prophecies of the actual person of King David in the Messianic psalms, “the literal character [of which] is indicated in the New Testament, [and which] refer to the suffering, the persecution, and the triumphant deliverance of Christ, or to the prerogatives conferred on Him by the Father.”

Indeed, if the Bible is shown to have falsely represented even one fact as true history, its divine inspiration and thus infallibility could not be maintained — not only as to historical facts but even as to theological and moral teaching. That is precisely why Pope Leo insisted, in line with all of Tradition, on the absolute inerrancy of Scripture as the product of divine inspiration.

Therefore, the undermining of the biblical account of the Flood as true history involving true events resulting in the destruction of all humanity, save Noah and his family, attacks “the foundation of the Christian religion” no less than the reduction of the Creation narrative in Genesis 1-3 to a fable or allegory, contrary to the admonition of Pope Saint Pius X regarding the literal historical facts that the first three chapters recount, without which the dogma of Original Sin would fall.

Which brings me to the third and final installment of this brief series, which will consider the incident at the Tower of Babel, recounted in Genesis 11, and its essential relation to the first ten chapters of Genesis and thus to the integrity of Genesis as a whole, the Old Testament as a whole, and the Bible as a whole.