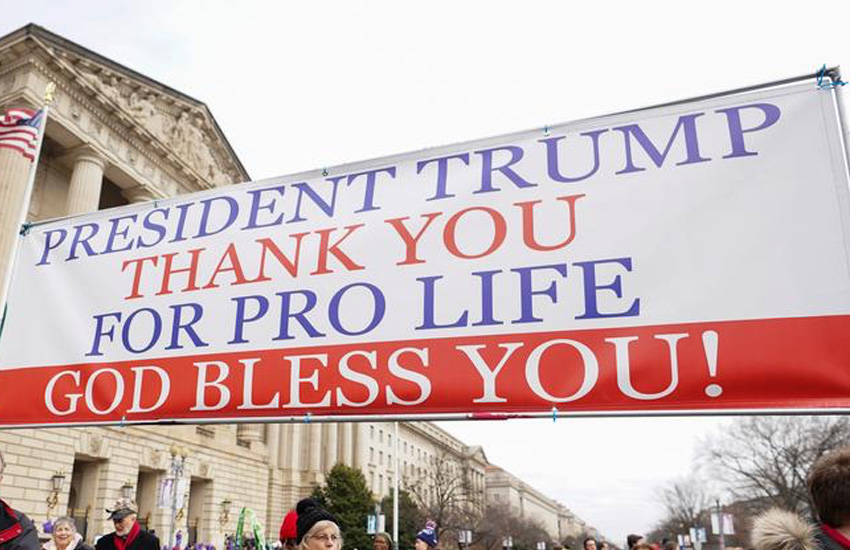 The March for Life and the Social Kingship of Christ

I have just returned from the 47th annual March for Life in Washington D.C., which assembles annually on the National Mall at the start of its peaceful witness against the abomination that is Roe v. Wade and the consequent mass murder of tens of millions of nascent human beings in the name of “liberty.”

For the first time in the March’s history, an American President addressed the vast gathering on the Mall in person.  There have been several “pro-life” Republican Presidents, but none of them said the things that Trump said today about life in the womb and its relation to the God Who creates each human soul:

“All of us here understand an eternal truth: Every child is a precious and sacred gift from God…. When we see the image of a baby in the womb, we glimpse the majesty of God’s creation….  As the Bible tells us, each person is wonderfully made…. And above all, we know that every human soul is divine and every human life, born and unborn, is made in the holy image of Almighty God….

“To all the women here today, your devotion and your leadership uplifts our entire nation and we thank you for that…. You stand for life each and every day…. You make… it your life’s mission to help spread God’s grace.”

And this, strange to say, from a former playboy with a history of marital infidelity, who may never, in fact, have been validly married to anyone, not even the First Lady. But then no less than King David was not only an adulterer but a murderer before he uttered the Psalm that commemorates forever his repentance under the influence of divine grace:

“Turn away thy face from my sins, and blot out all my iniquities. Create a clean heart in me, O God: and renew a right spirit within my bowels.  Cast me not away from thy face; and take not thy holy spirit from me.  Restore unto me the joy of thy salvation, and strengthen me with a perfect spirit.  I will teach the unjust thy ways: and the wicked shall be converted to thee.”

I am far from intending to say that Trump is a figure on the level of King David, a vessel of divine election who altered the course of salvation history.  Trump is, after all, an American politician of the 21st century. And yet the powers that be in the nexus of evil that is Washington were conspiring against him and attempting his removal from office at the very moment he was addressing the vast crowd on the Mall.  As Trump noted in his speech, “They are coming after me because I am fighting for you and we are fighting for those who have no voice.”

But is it really Trump as such they are attacking?  Or is it rather that Trump is an image, however shadowy, of the One they hate far more than Trump, even those who piously invoke His name?  Like that repellent ghoul Nancy Pelosi, orchestrator of the pending phony impeachment proceedings, who pretends to be a Catholic while she defends the brutal murder of children by abortionists at the very moment they are being born, but makes sure to display her Ash Wednesday ashes prominently before the cameras — thus earning this mordant satire of her hypocritical religious exhibitionism.

They are coming after Trump because they hate anything that might suggest — as he does, however faintly — the Social Reign of Christ the King. For it is none other than Trump alone among all the Presidents of the United States who has dared, not only to defend the unborn as made in the image and likeness of Almighty God, but to proclaim before the whole world on Christmas Day that “Christians give thanks that the Son of God came into the world to save humanity.”

In the end, it is Christ Himself that the forces of evil, whose haunt is Washington, are trying to impeach. As I have commented elsewhere: “And they will never give up trying to impeach Him until the Lord of History brings history to an end.”