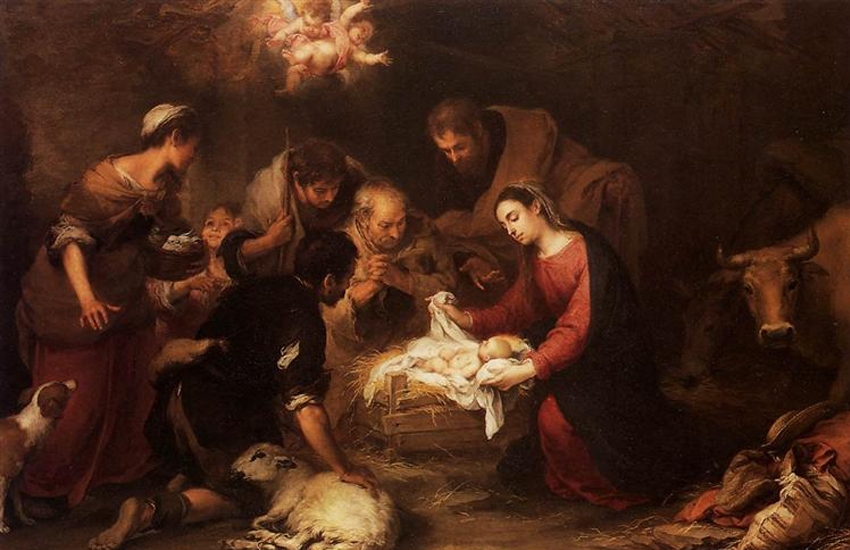 The Fatima Center wishes you and yours
a Blessed and Holy Christmas
and a Happy New Year.

Today we celebrate the birth of the God Who deigned to take on a human nature in order to live, suffer and die among His own creatures, only to rise again from the dead and found the Church whose mission continues to this day, despite the best efforts of “insane dreamers, rebels and miscreants,” to quote Saint Pius X, to destroy her from within as well as without.

Never have efforts at destruction from within been more intense than they are at this moment in salvation history. We are now witnessing nothing less than an attempt by the very leaders of the Church to assist worldly powers in what Christopher Dawson described as “the reversal of the spiritual revolution which gave birth to Western culture and a return to the psychological condition of the old pagan world…” (Dawson, Understanding Europe, 14).

A contempt for Western culture, which is to say Christendom, permeated the bizarre proceedings of the Amazon Synod, whose final document revives 18th century philosopher Jean-Jacques Rousseau’s fiction of the noble savage in the state of nature: “The life of the Amazonian communities not yet affected by the influence of Western civilization is reflected in their belief and rites regarding the spirits of the divinity, named in innumerable ways, active with and in the territory, with and in relation to nature… Let us recognize that, for thousands of years, they have taken care of their land, their waters and their forests, and have managed to preserve them until today so that humanity might enjoy and benefit from the free gifts of God’ s creation.”

While this absurd document goes on to speak of “new paths of evangelization,” it declares that they “must be built in dialogue with these fundamental wisdoms making themselves manifest as seeds of the Word.” But the semina verbi of which the Church speaks have nothing to do with jungle-dwelling tribes who still worship innumerable “spirits” 2,000 years after the coming of Christ, but rather, to quote John XXIII in Veterum sapientia, “the wisdom of the ancient world, enshrined in Greek and Roman literature, and the truly memorable teaching of ancient peoples, [which] served, surely, to herald the dawn of the Gospel which God’s Son, ‘the judge and teacher of grace and truth, the light and guide of the human race,’ proclaimed on earth.”

In short, the Logos, which is nowhere to be seen in the primitive rituals and superstitions of the still-unconverted tribes of the Amazon.

How ironic it is that the cited encyclical of John XXIII was a resounding call for a restoration of the Church’s Latin tradition, both in liturgy and in the sacred sciences, issued in 1962, just before the deluge that swept aside the traditional Roman Rite in favor of a concocted new liturgy whose imposition on the Church has been accompanied by the emptying of the pews, the seminaries and the convents—except, of course, where the Latin tradition has been maintained.

And what a far cry today’s notion of “evangelization” is from the traditional missionary activity of the Church, whose ever-increasing success was hailed by Pius XII in 1951, only twelve years before the Second Vatican Council signaled the beginning of a veritable decommissioning of the divine commission:

“We should like first of all to touch here briefly on the progress that has happily been made. In 1926 the number of Catholic missions amounted to 400, but today it is almost 600. At that date the number of Catholics in the missions did not exceed 15,000,000 while today it is almost 20,800,000. At that time the number of native and foreign priests in the missions was about 14,800; today their number is more than 26,800. Then all Bishops in the missions were foreigners; during the past 25 years 88 missions have been entrusted to native clergy; moreover with the establishment of the Ecclesiastical Hierarchy and the appointment of native Bishops in quite a few places, it has become more apparent that the religion of Jesus Christ is really Catholic and that no part of the world is excluded from it.”

With respect to Latin America, which includes the Amazon region, Pius XII declared: “We pray God especially for those missionaries who labor in the interior of Latin America, since We are aware of the dangerous pitfalls to which they are exposed from the open and covert attacks of heretical teaching.”

Today, however, a synod presided over by a Pope heaps praise on the spirit-worship of unconverted tribes. And the document which does so incoherently praises the Latin American martyrs, who were slaughtered precisely by savage unbelievers: “One of the most glorious pages of the Amazon has been written by the martyrs. The participation of the followers of Jesus in His passion, death and glorious resurrection has accompanied the life of the Church to this day, especially in the moments and places in which, for the sake of the Gospel of Jesus, Christians live in the midst of acute contradictions, such as those who fight courageously for integral ecology [!] in the Amazon.”

The “fight for integral ecology” has replaced the Word Incarnate in what now passes for the mission of the Church. No longer do missionaries preach the necessity of conversion to Christ for salvation. The growth in traditional missionary activity hailed by Pius XII in 1951 suddenly stopped after Vatican II, when a mysterious de-missionization of the Church began.

Today, incredibly enough, the clearest calls for conversion to Christ for salvation come, not from the generality of Catholic churchmen, but from evangelical Protestants who have no sacraments to offer and who profess only what Pius XI rightly described in 1928 as “a mutilated and corrupt version of the Gospel.” Vastly more so today. Yet a painted Nativity scene on the windows of a McDonald’s in Tennessee has a clearer evangelical message than anything emanating from the Vatican these days: “His name is Jesus. Believe.” How many post-Vatican II Catholics would be willing to say that one must believe in Jesus in order to be saved or even that one should believe in Him as a matter of religious preference?

Our Savior is born. And this Christmas we look to Him and His blessed Mother to restore the Church whose leaders exhibit a resolute forgetfulness of their own purpose in this life: to tell the world not only that His name is Jesus, not only that one must believe in Him in order to be saved, but also that to believe in Him is to believe and be baptized in the Church He founded and purchased with His blood: “It must be held by faith that outside the Apostolic Roman Church, no one can be saved; that this is the only ark of salvation; that he who shall not have entered therein will perish in the flood.”

So declared Blessed Pius IX in 1854—the same Pope who stood fast against the rising tsunami of modern errors that has since leveled most of the human element of the Church.