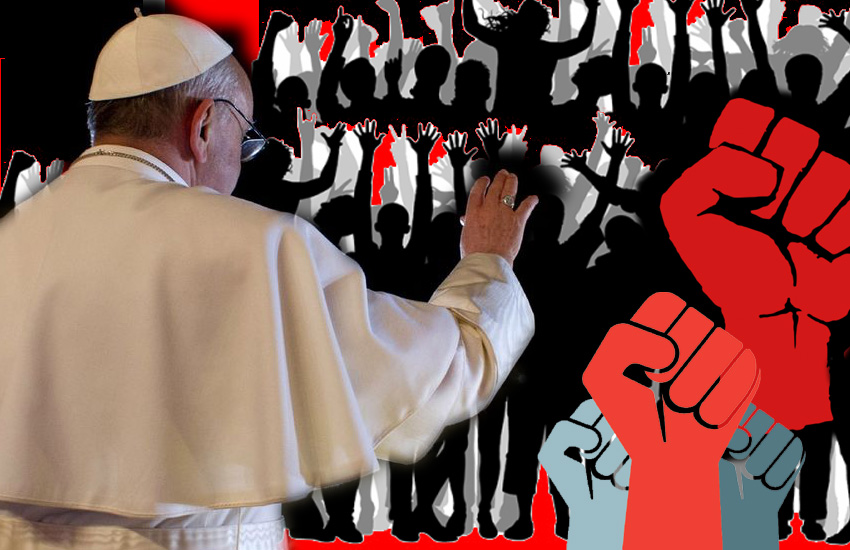 I believe it was Antonio Socci[1] who coined the term “Bergoglianism” to denote the peculiar mélange of Seventies-era, Latin American, leftist Jesuit liberalism that Pope Francis promotes as if he were still the Argentine Jesuit Father Jorge Mario Bergoglio.  Indeed, while adopting a papal name as a kind of official title, “Father Jorge,” as he has identified himself even after his election, insisted on renewing his Argentine passport under that name, below a passport photo of him in the papal cassock.  As if the papal attire were a kind of business suit the Vicar of Christ wears while at work in his official capacity — CEO, President, His Holiness, whatever — with no real change of identity as reflected in the apostolic tradition of the papal name.

In a brilliant presentation on Bergoglianism, Italian journalist Sandro Magister has identified one of its key elements: the myth of “the people.”  This is how Francis himself described it in a passage from his book-interview with Dominique Wolton, cited by Magister in his talk:

“There is a thinker that you should read: Rodolfo Kusch, a German who lived in northwestern Argentina, an excellent philosopher and anthropologist. He made one thing clear: that the word ‘people’ is not a logical word. It is a mythical word. It is not possible to speak of people logically, because that would mean making only a description. In order to understand a people, to understand what are the values of this people, one must enter into the spirit, into the heart, into the work, into the history, and into the myth of its tradition. This point is truly at the basis of the theology called ‘of the people.’ That is to say, to go with the people, see how it expresses itself. This distinction is important. The people is not a logical category, it is a mythical category.”

At first glance, what we have here is the sort of pretentious bafflegab in German philosophy that hides a lack of real meaning. But the lack of meaning is the meaning in this case.  For the mythical category of “the people” is a cipher, an empty notion waiting to receive whatever import the ideologue wishes to give it for ideological purposes: “the people” want this, or “the people” must do that, or “the people” must move in such and such a direction in order to fulfill “the people’s” destiny.

The myth of “the people” is the modality by which power is exercised upon the masses by revolutionary ideologues who have purported to represent their will from the time that R.R. Palmer called “Age of Democratic Revolution” began until the present day.  The revolutionary tells “the people” what they want, rouses a sufficiently aggressive minority of them to overturn the existing order, and then imposes a new order upon all of “the people,” informing them that they have been liberated.  The invariable result is that “the people” find themselves worse off than before, as seen in the bitter Latin American experience under the socialist dictators with whom Francis is so friendly.

But the Bergoglian conception of “the people” has swelled far beyond the confines of Latin America and the Liberation Theology with which his way of thinking is thoroughly tainted.  Bergoglianism sees the myth of “the people” as embracing the whole world in one global community in which “the people” will finally achieve peace, justice and universal brotherhood.

The Bergoglian rhetoric in this regard, which really has nothing to do with Catholic doctrine or the Catholic Church, purports to be anti-capitalist and anti-globalization in its demagogic pitting of rich against poor.  But, as Magister notes, in practice it is nothing of the kind. Quite to the contrary, the rhetoric hides an alliance with precisely the rich and powerful, who are leading a movement for one-world government.  To quote Magister:

“But here already there emerges a contradiction between words and deeds, in the politics of Pope Francis. Because while he preaches ceaselessly against the rich Devourers – whom he never identifies and calls by name – the richest men in the world and the superpowers of finance come thronging to be received by him. And he not only welcomes them with wide-open arms, but he heaps praises upon them…

“He praised Christine Lagarde, received repeatedly when she was at the head of the International Monetary Fund, as ‘an intelligent woman who maintains that money must be at the service of humanity, and not the other way around.’ He received in highly visible audiences, accepting in front of the cameras their substantial offerings of money, Tim Cook of Apple, Eric Schmidt of Google, Kevin Systrom of Instagram. He accepted the financing of Paul Allen of Microsoft and of the Mexican magnate Carlos Slim, for many years at the top of the ‘Forbes’ ranking of the richest people in the world.”

Then, too, there is the Bergoglian appeal for universal obedience by “the people,” not to the Church that Christ founded — in whose mission Francis seems little interested — but to the United Nations and the international tribunals of The Hague. Quoth Francis:

“I would like to repeat what the Doctrine of the Church says about this: When we acknowledge international organisations and we recognise their capacity to give judgment, on a global scale – for example the international tribunal in The Hague, or the United Nations. If we consider ourselves humanity, when they make statements, our duty is to obey. It is true that not all things that appear just for the whole of humanity will also be so for our pockets, but we must obey international institutions. That is why the United Nations were created. That’s why international courts were created.”

There is, moreover, the Bergoglian demand for a universal education that will be anything but Catholic or even vaguely Christian. This is seen in Francis’ vigorous promotion of his “Scholas Occurrentes,” an organization of pontifical right that networks some half a million schools around the world for the purpose of promoting, not the Faith — never that! — but rather what he calls a “global village of education … whose inhabitants generate a network of human relations, which are the best medicine against all forms of discrimination, violence and bullying… In this great village, education becomes the bearer of fraternity and creator of peace among all the peoples of the human family, and also of dialogue between their religions.”

“Of the ‘pious,’ however, there is nothing to be found. In the numerous speeches Francis has given to the ‘Scholas,’ the silence on the Christian God, on Jesus and on the Gospel is almost sepulchral. And the saints? Vanished as well. In the meetings of ‘Scholas Occurrentes,’ complete with audiences with the pope, the guests are stars of entertainment and sports, from George Clooney to Richard Gere, from Lionel Messi to Diego Armando Maradona.

“This secular flattening is not marginal, in the political vision of Pope Francis. In ‘Corriere della Sera’ of last October 2 Ernesto Galli della Loggia hit the mark when he recognized in this pontificate the tendency to dissolve Catholicism ‘in the indistinct,’ to interpret ‘the intimate missionary vocation of Catholicism toward the world as equivalent to the need to become confused with the world itself.’”

In sum, Bergoglianism is the ideology of Jorge Mario Bergoglio carried forward under the banner of the papacy — by a Pope who demagogically derides traditional Catholics as ideologues for the very reason that they reject ideology and cling to the faith of their fathers.  But then the demagogue always demonizes his opponents by accusing them of the very fault he himself exemplifies.

And so, the process by which, since Vatican II, the human element of the Church increasingly becomes “confused with the world itself” reaches its end stage with this pontificate.  All in the name of “the people” — the people of a world no longer to be conquered for Christ the King but rather for what Pope Saint Pius X warned was “the great movement of apostasy being organized in every country for the establishment of a One-World Church which shall have neither dogmas, nor hierarchy, neither discipline for the mind, nor curb for the passions, and which, under the pretext of freedom and human dignity, would bring back to the world (if such a Church could overcome) the reign of legalized cunning and force, and the oppression of the weak, and of all those who toil and suffer.”

A state of affairs in which, it now appears, only Heaven itself can deliver the Church and the world from what that great sainted Pope described as “the unremitting attacks of insane dreamers, rebels and miscreants.”

[1] Editor’s Note: Antonio Socci is an Italian Catholic intellectual, journalist and well-known television host whose 2006 book The Fourth Secret of Fatima concludes: “[T]hat there is a part of the [Third] Secret not revealed and considered unspeakable is certain. And today — having decided to deny its existence — the Vatican runs the risk of exposing itself to very heavy pressure and blackmail.”