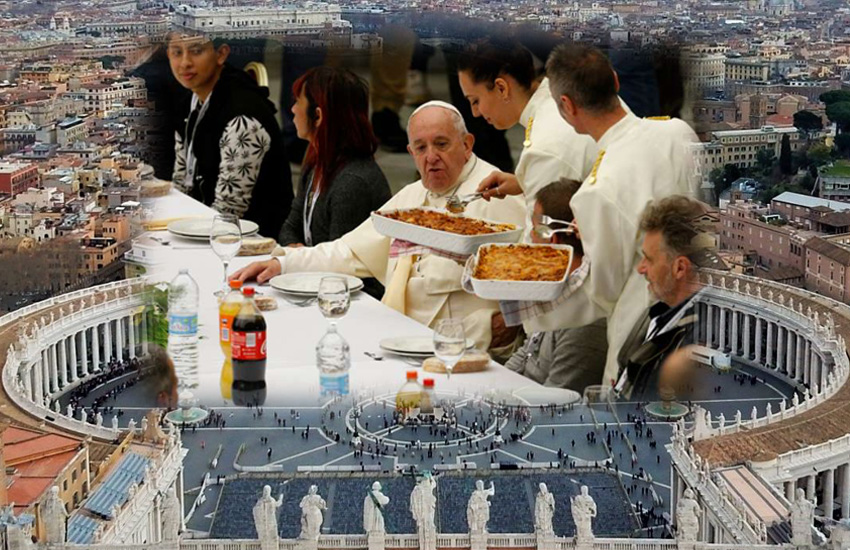 Socci: The Meaning of a Porkless Vatican

The always insightful Antonio Socci has published a column on the latest “lunch for the poor” at the Vatican. This is one of the many publicity stunts that supposedly demonstrate the Pope’s compassion for the poor, who nonetheless wind up back on the streets in dire poverty after an ostentatious free meal every now and then — in front of the cameras, of course, with the Pope at the front and center of the spectacle (see photo in Socci’s column).

Socci notes the absurdity that at this free lunch no pork was served even though Italian-style pork dishes are “not only tasty cuisine, but also Italian civilization, like wine and parmigiana.”  It is no coincidence, he notes, that “Pork November” is underway in the Italian province of Emilia.  “Who knew,” he writes, “that one day it [pork] would be ‘excommunicated’ or suppressed so as not to irritate the Muslims.”  In the same vein, he continues, was “the ridiculous ‘pork-free’ tortellini invented two months ago by the Curia of Bologna, always for the same motive.”

What may seem a shallow complaint by Socci is shown by him to be indicative of something far deeper.  “The Bergoglian gimmick” of the ostentatiously pork-free lunch, aped in Bologna, he argues, indicates a program that “could be summed up with the slogan: Muslims first.”  Socci cites a critical editorial in Corriere della Sera by one Ernesto Galli, who observes that “there are reasons far more important than gourmet cooking… surrounding the decision to ban pig’s meat from the preparation of tortellini.  Because here what is involved is not so much ‘our traditions’ or other similar things. What is involved, in my view, are some decisive indications of long-term tendencies of the Catholic Church.”

The same editorial, summarized by Socci, speaks of “a tendency by now discernible from a thousand signs” — namely, a “melting” of the Church into “indistinction,” meaning a reduction of the Faith to “‘an ethical ideology’… on a global level based on ‘human rights’” in which “it [the Church] progressively participates,” along with “pacifism, ecologism, anti-sexism and whatever else can be comprised by an indistinct globalist-do-gooder perspective under the aegis of certain international organizations and movements.”

All of this, says Socci (quoting Galli) “confronts Catholicism with ‘an entirely unprecedented challenge’, because a morality also universal, with a naturalistic inspiration and strongly secular tone, contests the field.” And in response, says Galli, “the Church of Bergoglio ‘removes all traits of its own historical identity and denounces too marked a deviation from the indistinct principles of a globalist ethic.’”

“That is,” says Socci, “the Church surrenders.  A suicidal adhesion to a multiculturalist ideology that ends by rejecting that which is Christian or Western in order to submit itself to other cultures, such as that of Islam.”  This development, said Pope Benedict XVI in a speech Socci cites, represents “a hatred of the West that is strange and that one can view only as something pathological.”  Indeed, this loathing of Western culture permeated the entire ridiculous synod on the Amazon.

So, this new abhorrence of pork in Catholic precincts represents far more than might seem apparent at first.  It suggests something like Saint Peter’s cowardly clinging to Jewish dietary laws at the beginning of the Church’s mission to the Gentiles, for which blunder Saint Paul famously rebuked him to his face at Antioch.  That is, it represents a threat to the very basis for the Church’s existence: the conversion of all nations and the salvation of souls.