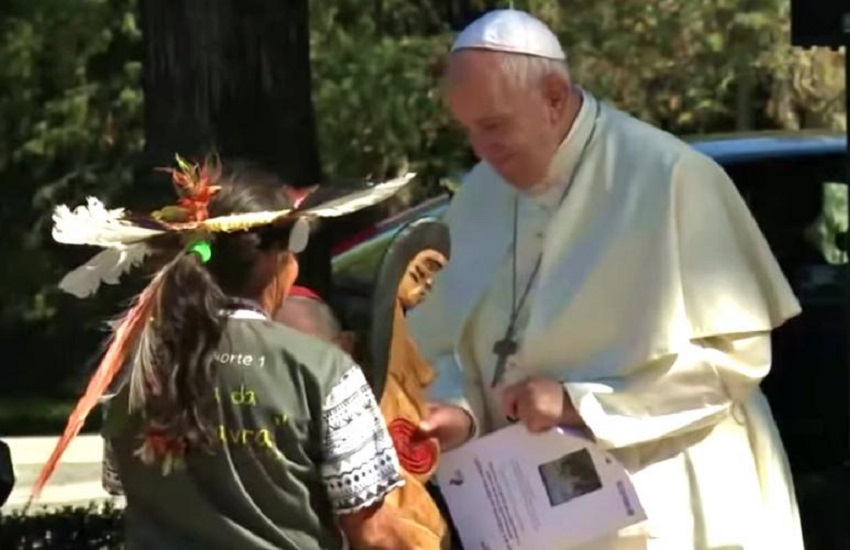 As is well known in the Catholic world, thanks to the tireless work of Father Nicholas Gruner, Cardinal Mario Luigi Ciappi, the personal theologian to five successive popes, revealed to a Professor Baumgartner in Salzburg, Austria in 1995 that “In the Third Secret it is foretold, among other things, that the great apostasy in the Church will begin at the top.”

But what is apostasy?  There is, first of all, the strict canonical definition: “Apostasy is a total repudiation of the Christian faith.” (CIC 1983, Can. 751) In his Summa Theologiae, however, Saint Thomas Aquinas discusses apostasy under various aspects, only one of which involves a total abandonment of the Faith. To quote the Angelic Doctor:

“Apostasy denotes a backsliding from God. This may happen in various ways according to the different kinds of union between man and God.

“A man may apostatize from God, by withdrawing from the religious life to which he was bound by profession, or from the Holy Order which he had received: and this is called ‘apostasy from religious life’ or ‘Orders.’

“A man may also apostatize from God, by rebelling in his mind against the Divine commandments….” ST II-II Q. 12

Saint Thomas goes on to say that “though man may apostatize in both the above ways, he may still remain united to God by faith.” It is only in the final stage of apostasy, the third stage, that the Faith itself is lost.  In that case, the apostate then “seems to turn away from God altogether: and consequently, apostasy simply and absolutely is that whereby a man withdraws from the faith, is called ‘apostasy of perfidy.’”

Why the “apostasy of perfidy” and not just apostasy simpliciter?  Because the word ‘perfidy’ connotes more than a mere loss of faith on the part of one man.  It is also a betrayal of Christ Himself, a rebellion against the King of Kings and Lord of Lords and the Church He founded as the ark of salvation.  It can thus be seen as a form of spiritual treason against the divinely founded ecclesial commonwealth and its Ruler.

For more than sixty years now the Church has endured the spectacle of Catholic churchmen, beginning at the very top, paying tribute first to Protestant sects founded by men and then any and all religions, as we saw with the Assisi events of John Paul II, and now the outrages perpetrated in connection with the Synod on the Amazon, whose virtual icon was the demonic figure of “Pachamama,” given center stage in the pagan ritual conducted in the Vatican gardens with the approval of the Pope (see photo above).

All of this backsliding from the true God has been justified in the name of the novelties of “ecumenism,” “dialogue” and “interreligious dialogue” which erupted into the Church through the opening provided by Vatican II, in whose texts these novelties appeared for the first time in Church history.

We now behold the outcome of which Pope Pius XI warned when he condemned the nascent “ecumenical movement” of the 1920s and forbade any Catholic participation therein. Pius observed that this movement, of liberal Protestant origin, was founded on “that false opinion which considers all religions to be more or less good and praiseworthy, since they all in different ways manifest and signify that sense which is inborn in us all, and by which we are led to God and to the obedient acknowledgment of His rule.”

It is obvious that this same false opinion is now “official” Vatican policy.  And the result of the spread of that opinion in the Church, just as Pius XI predicted, is precisely the “apostasy of perfidy” among Catholic churchmen. Quoth Pius:

“Not only are those who hold this opinion in error and deceived, but also in distorting the idea of true religion they reject it, and little by little, turn aside to naturalism and atheism, as it is called; from which it clearly follows that one who supports those who hold these theories and attempt to realize them, is altogether abandoning the divinely revealed religion.”

Consider this absurdly heterodox paean to the “spirits” worshiped by “indigenous people” in the forests of the Amazon, which appears in the Synod’s final document:

“The life of the Amazonian communities not yet affected by the influence of Western civilization is reflected in their belief and rites regarding the spirits of the divinity [!], named in innumerable ways, active with and in the territory, with and in relation to nature …. Let us recognize that, for thousands of years, they have taken care of their land, their waters and their forests, and have managed to preserve them until today so that humanity might enjoy and benefit from the free gifts of God’s creation.”

“Spirits of divinity” that are “active” in the jungles of the Amazon?  No comment is necessary.  But notice the implied contention that “the influence of Western civilization,” not the one true Church of Christ and His Gospel, is the difference between tribes that still worship “spirits” and baptized Christians who worship the true God in the true religion. As if the conversion of pagan tribes were some sort of cultural imperialism rather than a saving operation of divine grace for the salvation of souls and the uplifting of nations by the Church on her mission in the world.

One is tempted to think that the participants in this ridiculous gathering of bishops were trolling the Catholic faithful when they published this superstitious nonsense.  But if they actually believe it, then, objectively speaking, they exhibit the third stage of apostasy: loss of the Faith.  Even if they may think themselves Catholic believers, they have lost the Faith in the sense that, for them, the religion revealed by Christ makes no salvific difference in the lives of people, is thus of no account in their salvation, and therefore is merely one of many religions in the world as to which, quite simply, take your pick without any adverse eternal consequences.  They have, in effect, done exactly what Pius XI foresaw: “little by little, turn[ed] aside to naturalism and atheism… altogether abandoning the divinely revealed religion.”

As Francis himself declared in answer to the question why God “allows” so many religions in the world:  “there are many religions. Some are born from culture, but they always look to heaven; they look to God.”  Given that view of all religions as good, why would anyone feel any necessity to repent, be baptized and enter the Catholic Church?  The Church is simply no longer presented as the ark of salvation.  The divinely revealed religion is no longer presented as the one true religion in which one must believe if he would be saved.  Institutionally speaking, then, we are witnessing an apostasy — an apostasy that begins at the top.

All signs point to this pontificate as the terminal stage of an ecclesial crisis whose resolution will involve either a miracle of grace and the election of a holy Pope, whose name may well be Pius XIII, or else a divine chastisement that will cleanse the Church of the filth remarked by Cardinal Ratzinger, just before his elevation to the Chair of Peter, and the meta-heresy of Modernism, whose signal error — that all religions are more or less good and praiseworthy — now reigns supreme at the highest levels of the Church’s human element.

In either case, the Consecration of Russia to the Immaculate Heart of Mary will be the pivot on which salvation history turns in this epoch.