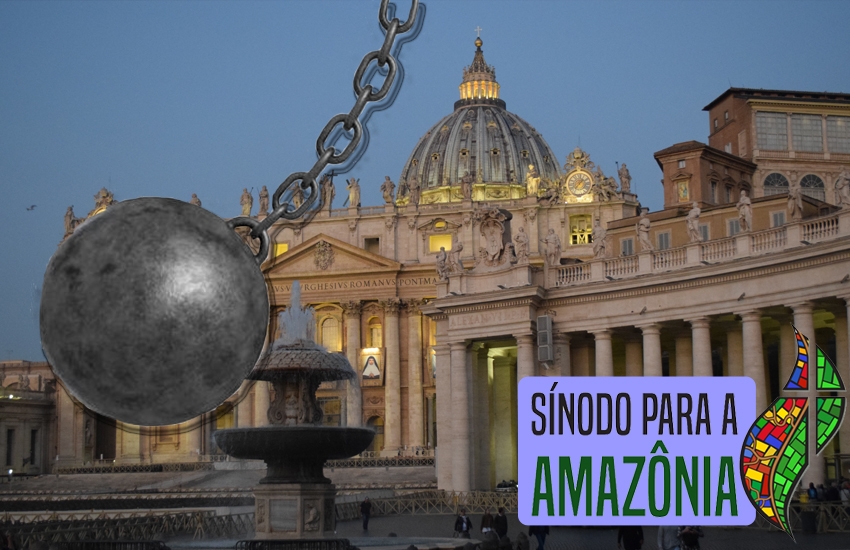 Well, the English/French “small group” relatio, prepared by Pope Francis’ handpicked subversives, whose work will be passed off as “the voice of the Spirit,” has provided a window onto the synodal proceedings that confirms our worst expectations:  they intend to wreck not only the priesthood, but literally whatever is left of traditional Catholicism in the already terminally dysfunctional “Church of Vatican II.”

Which is to say, they intend to commit ecclesial suicide, which of course is the inevitable outcome of the Protestantization, and now paganization, of much of the human element of the Church since the “springtime of Vatican II” ushered in a long and still-deepening post-conciliar winter.

As if anyone could seriously think this coven of subversion would confine itself to the Amazon region!  And what exactly is happening “in the whole world”?  Why, its “conversion” to a new form of religion in which Christian “colonizers” will be “converted” by those they “colonized”

What form will this conversion of the colonizers by the colonized take?  Evidently, it will involve a Church that is no longer centered on the sacrificial priesthood but rather would be essentially a cultural institution guided by the “wisdom” of jungle tribes wherein basically anyone, man or woman, can be a “priest” of some kind:

But not only must the Church learn from the pagans, she must also be tutored by the Protestant preachers who have led millions out of the Church in the Amazon and the whole of Latin America:

So much for the seven sacraments as channels of sanctifying grace without which one cannot be saved!  Rather, what is needed is some rip-roaring, Protestant tent revival speechifying to work up people’s emotions and convince them they are saved if they simply declare they accept Jesus as their Lord and Savior.  As if receiving Him reverently, Body, Blood, Soul and Divinity, in the Blessed Sacrament were not the most intimate possible relationship to Christ.

Never mind that Protestant preaching is laden with deadly errors against the Faith.  What matters is that one feels that he has a relationship with Jesus.  No need for all those “rituals” or all that fussing about sin. Once saved, always saved, don’t you know?

And so, the role of the priesthood in leading souls to Heaven must, quite simply, be done away with in favor of something very much like the “base communities” of Liberation Theology in which the community at large “does religion”:

The Protestant poachers of Catholic souls must be delighted by this nonsense.  For if the Catholic Church must learn from them, why should Catholics who have defected from the Church to go to them even bother returning?  Have they not already found what these synodal idiots declare the Church does not possess?

But wait!  There is also the dogma of climate change, which requires an “ecological conversion” as well as a conversion to the pagan wisdom of the jungle:

Answer: it isn’t possible.  Moreover, the “elimination of CO2” would mean the death of all life on the planet, as plants need CO2 for photosynthesis and the “carbon cycle” supplies the very carbon atoms from which DNA and the tissues of living things are composed.

But the Synod on the Amazon has the answer:

Go forth and plant trees in every nation, reducing carbon in the name of “the Spirit,” teaching them to observe all things the wisdom of indigenous peoples commands of thee. That is the new Gospel this ridiculous Synod intends to foist upon the Church.

Oh yes, there will still be ordained priests in this proposed new Church.  But they will be married, and the deacons ordained to assist them will be women.  The deal is done, barring divine intervention.

Get ready to duck the latest swing of the post-conciliar wrecking ball as it levels the remains of “the Church of Vatican II” and replaces it with “the face of the Amazon.”  And when the wrecking ball passes yet again, we can simply continue the practice of the faith of our fathers in the true and unchanging Church of Eternal Rome, wherever it can still be found, while in the background the sound of collapsing structures signals a merciful end to the process of “self-demolition” which that deluded visionary, Paul VI, lamented too little and too late to stop what he himself had set in motion.