Readers may have noticed that this column, like so many others written by Catholic observers of the ecclesial scene, has become largely a chronicle of what I have called the Bergoglian Debacle. Not a day passes without some further indication that with this pontificate the Church is witnessing an unparalleled aberration in the office of the papacy, which threatens to become an instrument for the attempted imposition on the entire Church of one man’s misguided opinions about all manner of things.  I stress the word ‘attempted’.

Everywhere the alarm bells are ringing out against the course of this papacy, being heard in places where nary a criticism of a Pope had ever been heard before.  Consider this article, appearing at Town Hall, by William F. Marshall, an intelligence analyst and investigator who is a lead investigator for Judicial Watch, the organization that has been instrumental in forcing disclosure of evidence that the Obama administration was engaged in spying on the Trump campaign during and after the election of 2016.

The title is shocking, but understandable given the ever-worsening situation Francis is creating for the Church: “The Fool in the Vatican.”  As Marshall explains, “I never thought I would refer to a Pope as a fool, but it has come to that.”  Marshall is referring to the latest outburst of the Airplane Magisterium in which a rambling Francis, exhibiting an astonishing combination of hubris and insouciance, blithely declares that “For me, it is an honor that [conservative Catholic] Americans attack me” because of his blatant attempts to undermine the teaching of his own predecessors on marriage, sexuality and bioethics (witness Francis’ systematic destruction of the John Paul II Institute for Marriage and the Family) while, as Marshall puts it, “opining on climate change and migration,” subjects in which he has no competence or teaching authority.

During the same airplane press conference, according to the Vatican translation, which is presented here by National Catholic Register, Francis admitted that it is not only the Americans who “attack” him, “Criticisms are not coming only from the Americans, they are coming a bit from everywhere, even from the Curia.”

From everywhere!  Does this trouble Pope Francis? Does it cause him to consider whether any of his ideas are wrong or that perhaps he is abusing the power of his office?  Not at all.  Quite the contrary, he evidently believes that any disagreement with his views is tantamount to schism. Concerning his critics “everywhere,” even in the Curia, he says:

“Regarding the case of the Pope: I don’t like this aspect of the Pope, I criticize him, I speak about him, I write an article and ask him to respond, this is fair. To criticize without wanting to hear a response and without getting into dialogue is not to have the good of the Church at heart, it is chasing after a fixed idea, to change the Pope or to create a schism. This is clear: a fair criticism is always well received, at least by me. Secondly, the problem of the schism: within the Church there have been many schisms.”

It is not easy to make sense of this muddled remark, but it seems to signify that Francis doesn’t mind criticism so long as it does not call for him to alter his opinions or change his course.  As if to say that objecting to papal statements or decisions is per se schismatic.  The balance of the rambling comment supports that interpretation:

“After the First Vatican Council, for example, the last vote, the one on infallibility, a well-sized group left and founded the Old Catholic Church so as to remain ‘true’ to the tradition of the Church. Then they developed differently and now they ordain women. But in that moment they were rigid, they rallied behind orthodoxy and thought that the council had erred. Another group left very, very quietly, but they did not want to vote. Vatican II had these things among its consequences. Perhaps the most well-known post-conciliar split is that of Lefebvre.

“In the Church there is always the option for schism, always. But it is an option that the Lord leaves to human freedom. I am not afraid of schisms, I pray that there will be none, because what is at stake is people’s spiritual health. Let there be dialogue, let there be correction if there is an error, but the schismatic path is not Christian.”

The thought here is likewise a hopeless muddle: Francis conflates dissent from the Church’s constant teaching, ultimately affirmed by an infallible conciliar definition that the Old Catholics rejected, with a legitimate refusal to accept novelties that contradict the Church’s constant teaching, including his own novel attempt to overturn the bimillenial teaching and practice (defended by both John Paul II and Benedict XVI) on the impossibility of Holy Communion for divorced and “remarried” Catholics who intend to continue their adulterous sexual relations.

So, disagreement with Francis is schism, and he is “not afraid of schisms” — meaning the schisms his own novelties will engender! Incredibly enough, on another occasion Francis predicted precisely that “It is not to be excluded that I will enter history as the one who split the Catholic Church.”  And he is not afraid of this.  What can one say?

The remainder of Francis’ comment on “schism” — as he sees it — reveals a similar derangement of thought:

“A schism is always an elitist separation stemming from an ideology detached from doctrine. It is an ideology, perhaps correct, but that engages doctrine and detaches it… There’s the ideology of the primacy of a sterile morality regarding the morality of the people of God. The pastors must lead their flock between grace and sin, because this is evangelical morality.

“Instead, a morality based on such a Pelagian ideology leads you to rigidity, and today we have many schools of rigidity within the Church, which are not schisms, but pseudo-schismatic Christian developments that will end badly. When you see rigid Christians, bishops, priests, there are problems behind that, not Gospel holiness. So, we need to be gentle with those who are tempted by these attacks, they are going through a tough time, we must accompany them gently.”

Pastors who lead their flocks between grace and sin? What on earth is the man talking about?  It is almost impossible to say, but a nucleus of meaning is faintly discernible: anyone who disagrees with Francis’ utterly unprecedented latitudinarian conception of sexual morality, including bishops and priests, is either a schismatic or a “pseudo-schismatic” promoting the “schools of rigidity” that Francis sees emerging “everywhere.”

Marshall vents his scorn toward this nonsense with unsparing candor:

This is no “radical traditionalist speaking” but rather an admirer of John Paul II, whose own dalliances with novelty nevertheless did not trench upon something as basic to Church teaching as the Sixth Commandment. “I love the Church,” Marshall concludes, “I love its history, its majesty, its enormous contributions to human civilization, and its teachings, imperfect as I may be in following them. And it requires the finest of men to lead it. Where is Pope (now Saint) John Paul II when we most need him?”

As Philip Lawler has just written, in response to Francis’ declaration that he is “not afraid of schisms”: “Well, I am. And I’m afraid of any Roman Pontiff who isn’t afraid of splitting the universal Church. Which means that, yes, I’m afraid of Pope Francis.” 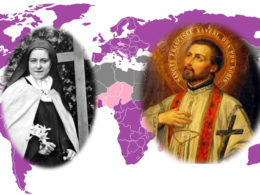 Even Lay Catholics Are Called to Be Missionaries 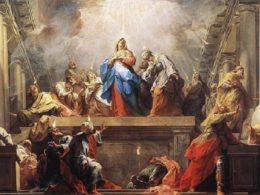 The Feast of Pentecost

On the 50th day after Easter (counting both Easter Sunday and Pentecost Sunday), Our Lord sent the Holy…
byThe Fatima Center 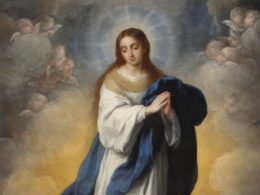 Happy Feast of the Immaculate Conception!

A blessed Feast of the Immaculate Conception to you!  “I will put enmities between thee and the woman,”…
byThe Fatima Center 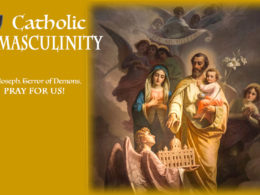 Part I. Introduction Our Church, and as a result, our society is suffering from a plague of effeminacy.…
byKennedy Hall
No comments