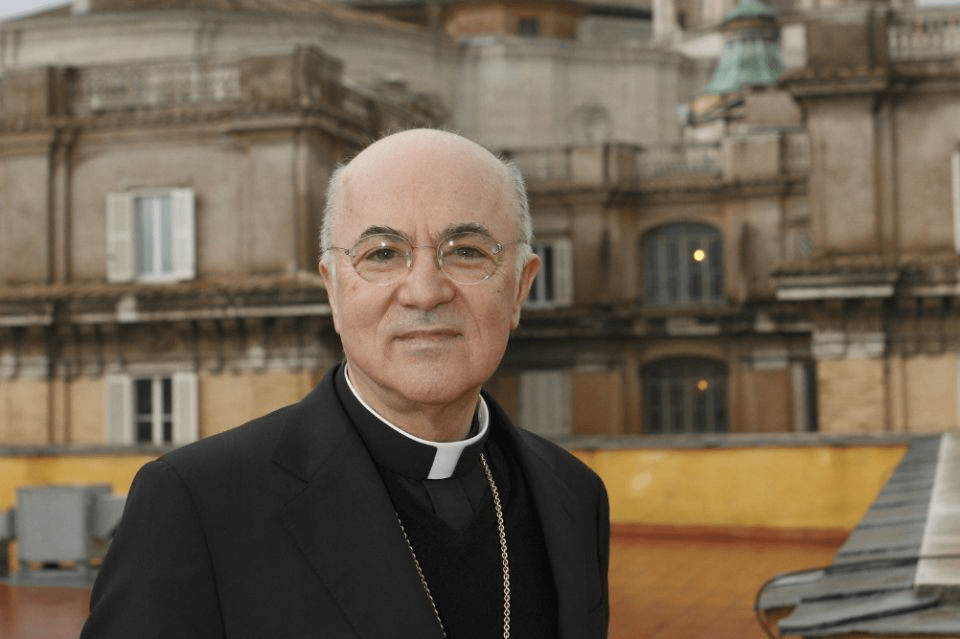 From Dr. Robert Moynihan we learn the surprising news that he has been meeting in secret with “the controversial and (I think) holy Archbishop Carlo Maria Vigano… in a quiet place.”  Vigano is in hiding from the humble and merciful Pope Francis and his collaborators, who, as Moynihan also reports, have reportedly enlisted the Vatican Secret Service to hunt him down following his publication of the famous letter in which he accuses the Pope of failing to heed his warnings during a private audience in 2013 about the crimes of ex-Cardinal McCarrick.  Concerning that fateful meeting, as I explain here, Francis now claims a lack of memory while expressing pleasure at what he thinks is the media’s “fantastic” job of supposedly discrediting the Archbishop because of an irrelevant and settled property dispute with his brother.

On July 30, in the first item linked above, Moynihan recounts how Vigano, with whom he has spoken “for many hours,” has a central concern: “the safety, freedom and doctrinal purity of the Church — the mystical body of Christ, the people of God, which he has served throughout his life, and still wishes to serve with all his being.”

Moynihan asks whether this witness against a plainly wayward Pope is “a courageous soul, balanced between piety, prayer, and professional competence, willing to risk his reputation to speak out on behalf of all believers, especially the weak and the abused” or else “someone far less appealing, a coward, not a hero, as some venom-tongued monsignors in Rome are saying…”

It is clear which view of Vigano Moynihan holds.  He describes his subject thus:

“a small man with intelligent eyes, exquisite manners, studious, hardworking, uncomplaining amid the rigors of travel, not dashing, not evidently heroic…  a type of living reservoir of Roman curial knowledge, meaning that he knows the Curia with mathematical precision from end to end, from one office to the next, and his memory ranges back over more than 50 years. He is ‘Mr. Roman Curia’. So this man is an archetypal ‘servant of the Pope.’ Every Pope! He has served Pope Paul VI, Pope John Paul I, Pope John Paul II, Pope Benedict, and now Pope Francis. So how could the archetypal papal servant suddenly have become the archetypal papal betrayer, the ‘Judas’ of the Curia in the early 21st century? The very thought causes one to shake one’s head with puzzlement. It cannot be!”

Surely, then, a credible witness!  And Moynihan quotes this credible witness as follows concerning the preposterously heterodox working document for the upcoming Amazon Synod: “Where is the Christian message here? In fact, the figure of Christ is absent. The Synod working document testifies to the emergence of a post-Christian Catholic theology, now, in this moment. And this is very troubling. It is against everything I have worked for and believed for all my life.”

Vigano maintains that this Synod represents “the triumph of a 60-year-old plan… to bring a new sort of thinking into the heart of the Church, a thinking rooted in elements of Liberation Theology containing strands of Marxism” — a project, in fact, of the liberal Jesuits of the post-Vatican II epoch.  And now, he notes, a liberal Jesuit sits on the Chair of Peter for the first time in 2,000 years.

Is the man in hiding a credible witness?  That he is such seems beyond reasonable dispute.  But given the mountain of proof Francis himself has provided as to his own intentions, the credibility of Archbishop Vigano is not much more than an academic question.  Our own eyes provide the best evidence.