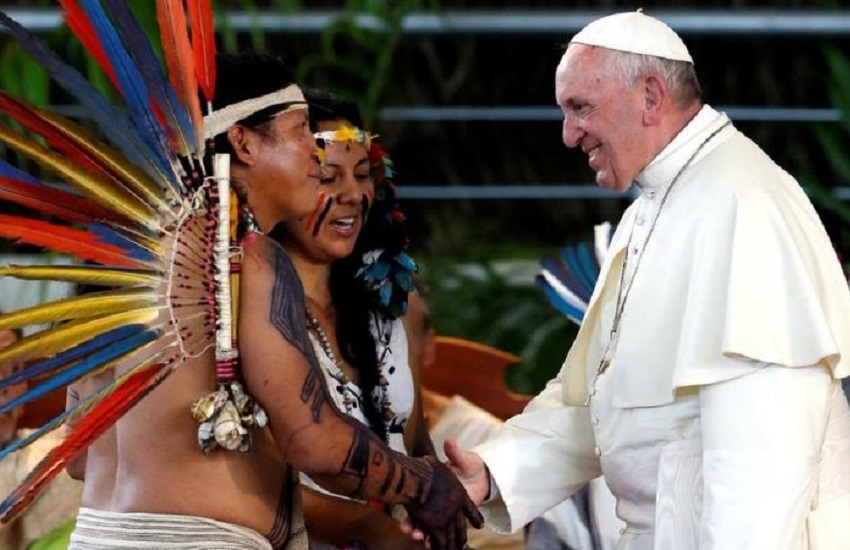 I believe it was Scott Hahn who once described the devil as “a cosmic blockhead” who sooner or later overreaches in his hatred of God and commits some fatal blunder that thwarts, yet again, his plans for the destruction of an indestructible Church.

It seems to me that the upcoming “Pan-Amazonian Synod” may represent just such a blunder, as indicated by its Instrumentum Laboris (IL).  It is as if the Adversary, sensing that his time is short, has decided to skip a number of steps in the auto-demolition of the Church, where he has had considerable success amidst her human element since Vatican II, and proceed immediately to a declared abolition of the faith and the Church as such.

The IL is an absurd document that does not even attempt to disguise its intention with the layers of studied ambiguity and pious camouflage that characterize so many of the subversive documents of the post-conciliar epoch.  It thus invites nothing less than public contempt and derision — and this from serious people who have never spoken out in this way before.

For example, as LifeSiteNews reports, “A Benedictine theologian has joined the chorus of voices criticizing the working document of the upcoming Synod of Bishops on the Amazon, calling it ‘biodegradable Christianity.’”

The theologian in question is Dom Giulio Meiattini, a monk of the abbey of Madonna della Scala in southern Italy.  The IL, he protests:

“is the most daring move that could be conceived and attempted by the secretariat of a synod of the Catholic Church. The document proposes and contains nothing less than a reversal ab imis fundamentis [in its deepest foundations] of the very idea of Church and Christian faith…. The Person of Christ and His Gospel disappear; they are literally swallowed up by the lush tropical forest.”

Meiattini’s commentary is dripping with well-deserved mockery for a document that depicts the jungles of the Amazon as a kind of Eden in which the only threat to the integrity of the noble inhabitants seems to be, incredibly enough, any effort by the Church to convert them.  For example:

What is most striking about Meiattini’s commentary is his clearly disgusted conclusion that the IL is not even worthy of being called heretical, but rather has gone beyond heresy into outright apostasy:

“The heretic always believes that he is giving a more correct interpretation of Scripture, whose authority he does not question…. But there is no longer any detectable trace of this scriptural premise in the Instrumentum laboris for the Pan-Amazon synod….

“That is why Cardinal Brandmüller’s diagnosis is correct, but immediately adding, as he himself does, that more than heresy we should speak of apostasy. The removal of the scriptural principle (which is like saying the renunciation of theology and mission), the abdication of a reading of the phenomena and mission of the Church in the light of the Word of God, replacing it with the uncontaminated and mythical “theological locus” of the environment, of territory and of the poor… is equivalent to the abandonment of the ground of faith….”

If there is any serious, orthodox Catholic of any position of prominence in the Church who has not already concluded that “the current Pope’s leadership has become a danger to the faith,” as Philip Lawler realized more than two years ago, this synod on the Amazon will make it impossible to ignore the danger any longer.

Has the cosmic blockhead, then, overreached and undone himself?  The answer to that question will be apparent in the months ahead, when we will see whether the members of the Mystical Body, both laity and clergy, unite sufficiently to provide an effective refusal to allow the Church to be injected with a vial full of poison at the synod in October.

It is either that or a resolution of the ecclesial crisis that can only be called apocalyptic.