Another Vatican Gimmick in Service of Globalist Aims

In a letter he sent to “young economists and entrepreneurs” on May 1, Pope Francis continued what can only be called a transformation of the papacy — or rather, his papacy — into an instrument of the globalist agenda according to which, paradoxically, the lords of hyper-capitalism, such as Soros, Gates and Bezos, seek to destroy the free enterprise and private property of smaller owners under the rubrics of “climate change,” “compassion” for the poor and socialist measures for wealth redistribution that burden the middle class while the plutocrats with whom Franscis is so comfortable only get richer.

Francis’ latest gimmick along these lines, outlined in the letter, is a proposed meeting at Assisi in March of next year, entitled “The Economy of Francesco,” during which “young men and women studying economics and interested in a different kind of economy” will “enter into a ‘covenant’ to change today’s economy and to give a soul to the economy of tomorrow.” (Emphasis in original.)

With dreary predictability, this utopian “economy of tomorrow” will “ensur[e] justice for the poor and find[] answers to the structural problems of the global economy.” It will “correct models of growth incapable of guaranteeing respect for the environment, openness to life, concern for the family, social equality, the dignity of workers and the rights of future generations.”

How exactly would the “economy of tomorrow” realize this utopian dream?  One can be certain it would not be through what the authentic Catholic social teaching enjoins: the rejection of socialism in a society of small owners wherein economic activity is subordinated to the law of the Gospel, men are paid sufficiently to avoid the necessity of women having to enter the work force instead of pursuing the vocation of motherhood, commerce is suspended on Sundays, there is respect for the religious observances of Catholics, including modesty in the workplace, and the law forbids the sale of immoral products and “services,” including pornography, contraception and abortion (Francis having never called for worldwide abolition of abortion as he has with capital punishment, while condoning the use of contraception for disease prevention).  None of these things would meet with the approval of the lords of hyper-capitalism.

Instead, Francis, in yet another appalling abuse of traditional sources, invokes Saint Francis of Assisi and his Canticle of the Sun — from which he censored all the inconveniently Catholic parts in his “eco-encyclical” Laudato si’ as I explain here.  According to Francis, the saint whose name he took:

“is the outstanding example of care for the vulnerable and of an integral ecology.  I think of the words spoken to him from the Crucifix in the little church of San Damiano: ‘Go, Francis, repair my house, which, as you see, is falling into ruin.’ The repair of that house concerns all of us. It concerns the Church, society and the heart of each individual. Increasingly, it concerns the environment, which urgently demands a sound economy and a sustainable development that can heal its wounds and assure us of a worthy future.”

Nonsense.  God did not give Francis any mandate to fix the environment.  The reference to the house that was falling into ruins was solely to the Church, which Saint Francis was to rebuild by his exemplary evangelical witness.  Just how little Saint Francis cared about environmentalism and other worldly projects is shown in the very lines Pope Francis expunged from the Canticle without even an ellipsis to indicate the censorship:

Praised be You, my Lord,
through our Sister Bodily Death,
from whom no living man can escape.

Woe to those who die in mortal sin.
Blessed are those whom death will
find in Your most holy will,
for the second death shall do them no harm.

Praise and bless my Lord,
and give Him thanks
and serve Him with great humility.

Today, once again, the Church seems to be falling into ruins.  But now, with bitter irony, she is afflicted by a Pope who, unlike his namesake, seems intent on accelerating that ruination by reducing her human element to a bureaucratic machine for the pursuit of globalist schemes.

Yet from such apocalyptic signs the faithful know to expect that a divine reckoning is near at hand. 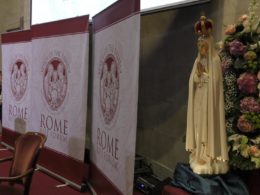 The Fatima Center Participates in the Rome Life Forum and the March for Life!

On Thursday and Friday, May 17th and 18th, in the Aula Magna [“Great Hall”] of the Angelicum University…
byThe Fatima Center