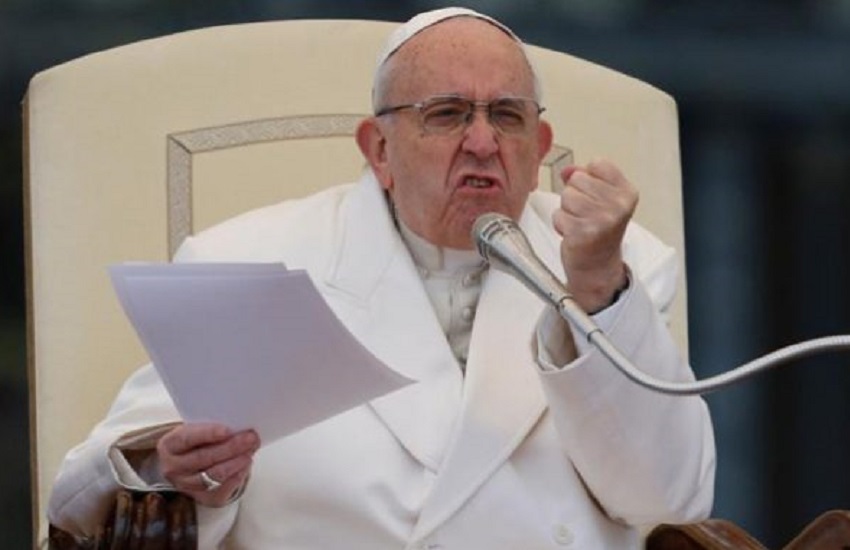 The Liberal Media and Pope Francis Align Against “Conservative” Catholics

A story at Reuters on the just-published Open Letter accusing Pope Francis of heresy reveals more than Reuters and its author, one Philip Pullella, seem to realize. According to the headline, “Conservatives want Catholic bishops to denounce pope as heretic.” The article is preceded by the advice “5 min read” — an indication of just how superficial is the media’s understanding of the issues involved in the Letter.

First of all, the “conservatives” mentioned in the headline, meaning the original 19 signatories of the letter (now more than 1500 in number), include Father Aidan Nichols, who, as Pullella notes, is “one of most recognized theologians in the English-speaking world.” As Nichols’ participation would indicate to anyone with any real understanding of Catholic teaching, these “conservatives” are nothing more or less than orthodox Catholics appalled and alarmed by Francis’ reckless pontificate. That a theologian of Nichols’ stature would lend his name to the Letter demonstrates the gravity of the crisis Francis has created.

What Pullella is really reporting, however inadvertently, is the astounding news that orthodox Catholics have been compelled to speak out publicly against a heterodox Pope in a situation that makes the heretical opinion of Pope John XXII on the beatific vision look trivial by comparison.

Pullella’s take on the Open Letter, however, is drearily shallow: “The letter attacks Francis for allegedly softening the Church’s stance on a range of subjects. They say he has not been outspoken enough against abortion and has been too welcoming to homosexuals and too accommodating to Protestants and Muslims.” In the same vein, WABC News (as I heard on the radio today) characterized the Letter as a protest against “openness to LGBTQ relationships.”

But the Letter has nothing to do with such emotion-laden jargon as “welcoming” and “accommodating” and “openness.” As if Francis were being “attacked” just because he is a nice person whereas his critics are mean-spirited Pharisees, as the not-so-nice Francis routinely denominates orthodox Catholics in the endless stream of demagogic denunciations he has uttered over the past six years.

What the Open Letter is really about is a Pope who seems determined to undermine the foundations of the Catholic religion even in matters as fundamental as the Sixth Commandment, thus endangering both the temporal and eternal welfare of the very people he is supposed to be “welcoming” and “accommodating” when in truth he is leading them down the primrose path.

Thus, the Letter abundantly documents the following errors of Francis, especially those stemming from his disastrous Amoris Laetitia, which essentially legitimates sexual relations outside of marriage in cases where the participants deem themselves incapable of doing otherwise:

“I. A justified person has not the strength with God’s grace to carry out the objective demands of the divine law, as though any of the commandments of God are impossible for the justified; or as meaning that God’s grace, when it produces justification in an individual, does not invariably and of its nature produce conversion from all serious sin, or is not sufficient for conversion from all serious sin.

“II. A Christian believer can have full knowledge of a divine law and voluntarily choose to break it in a serious matter, but not be in a state of mortal sin as a result of this action.

“III. A person is able, while he obeys a divine prohibition, to sin against God by that very act of obedience.

“IV. Conscience can truly and rightly judge that sexual acts between persons who have contracted a civil marriage with each other, although one or both of them is sacramentally married to another person, can sometimes be morally right, or requested or even commanded by God.

“V. It is false that the only sexual acts that are good of their kind and morally licit are acts between husband and wife.

“VI. Moral principles and moral truths contained in divine revelation and in the natural law do not include negative prohibitions that absolutely forbid particular kinds of action, inasmuch as these are always gravely unlawful on account of their object.

“VII. God not only permits, but positively wills, the pluralism and diversity of religions, both Christian and non- Christian.”

Even Father Joseph Fessio, SJ, who can hardly be called a “radical traditionalist,” has come out of retirement to make this observation on the Open Letter:

“There’s seven different … heresy counts. Each one is clearly stated. Each one of them is backed up by previous Church teaching, either councils or popes. And then they show where Pope Francis has made statements that seem to contradict these Church teachings, and then also how by his actions and his inactions, in some cases, he was to corroborate that understanding.”

At this stage in the Francis Debacle, I doubt there is any sober and orthodox Catholic of repute who would defend the increasingly wayward course of this pontificate. But Francis can always count on one defender: the liberal media that sides with him as he denounces the faithful for defending the Faith of their fathers.

It is no exaggeration to say that what we are now witnessing, as Roberto de Mattei has written, is “Neo-Modernism, entrenched at the very top of the Church,” which “preaches false peace and false fraternity. But false peace brings war into the world, just as false fraternity brings schism, which is war inside the Church.”

Tellingly, de Mattei notes the prediction of St. Luigi Orione in 1913, four years before Our Lady appeared at Fatima to provide in the Third Secret a prophetic warning of what Orione had predicted: “Modernism and semi-Modernism cannot go on – sooner or later it’s going to be Protestantism or a schism in the Church which will be the most terrible that the world has ever seen.”

But that terrible state of affairs can only be the harbinger of a dramatic and decisive divine intervention that will bring it to an end. That intervention will involve the ultimate Triumph of the Immaculate Heart of Mary following the long-delayed Consecration of Russia.