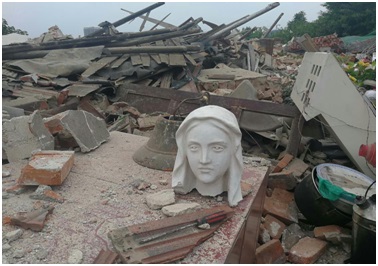 With each passing day the Vatican’s betrayal of the faithful Catholics of China’s “underground” Church becomes more evident.  An article by China expert Steven Mosher at LifeSiteNews observes that “By now it is clear to everyone — even Vatican diplomats, presumably — that things are going from bad to worse for Catholics in China. The secret Sino-Vatican agreement that was supposed to provide some protection for the Catholic Church in China has instead been turned on its head. It is perversely being used by the Communist authorities to crush the long-suffering but faithful Underground Catholic Church while the Vatican stands silently by.”

The Vatican’s fatal — was it deliberate? — blunder was to accord legitimacy to the “Catholic Patriotic Association” (CPA), a creation of the dictatorship in Beijing that pretends to be the “official Church” in China. Could the Vatican’s negotiators really not foresee that once this was done, Beijing would demand that all Catholics in China become registered members of the CPA?  Could it not foresee that Chinese Catholics of conscience — still the vast majority of the “underground” Church — would refuse to submit to the authority of literal butchers who preside over a regime of forced abortion and have declared the CPA’s independence from Rome, which is to say its status as a manmade, non-Catholic sect?

Mosher notes, as has this column, the demolition of a recently constructed church in the “underground” (that is, the legitimate) Diocese of Fengxiang in Shaanxi province.  But, he further notes, since the secret Vatican-Sino pact was negotiated “even churches and shrines that have stood for centuries are being reduced to rubble,” including “the beautiful shrine of Our Lady of the Mountain, located in Yunnan province,” which “was razed to the ground.”

Moreover, even members of the CPA are being persecuted if they show any signs of a Catholicism that is not thoroughly “Sinicized” — that is, made conformable to the demands of the butchers of Beijing. Hence, while the Vatican says nothing and does nothing, “the Qianwang Catholic Church in Jinan City, Shandong province, for example, which dates from 1750 was demolished last August” and the “Blessed Mother’s severed head gazes forlornly on the rubble that is all that remains.” (See LifeSite’s photo above.)

Mosher cites another LifeSiteNews report that the Catholic shrine in Fengxiang, China, “is currently slated for destruction” while the Marian shrine at Mujiaping “was temporarily saved from demolition when local Catholics formed a human wall on the steps leading up to it.” He reports that in response to this resistance, local authorities have “assembled a small army of some 600 hundred police and officials” that is planning to storm the shrine and destroy it.

In the face of these developments, the Vatican Secretary of State, Cardinal Pietro Parolin, ludicrously continues to insist that the secret pact he negotiated will “help advance religious freedom, to find normalization for the Catholic community there, and then for all other religions to have space and a role to play in society which is recognized.”

Mosher is at pains to note that the pact is not the cause of this continuing persecution of the true Church in China, which predated the agreement, but there can be no question that the Vatican has given Beijing a new and powerful warrant for its evident program of forcing all Chinese Catholics into a government-run pseudo-church that will toe the Party line. Indeed, as Mosher observes: “Communist Leader Xi Jinping, like Chairman Mao Zedong before him, seems determined to extinguish all religious faith within his country, replacing it with faith in the Chinese Communist Party and its leader, who happens to be Xi himself.”

Mosher concludes that “[p]erhaps it is time for the Holy Father to entrust China to the Virgin Mary, as Queen of Peace, through her Immaculate Heart.”  I would suggest, rather, that it is time — in fact, long past time — for the Pope to consecrate Russia, the historical source of Chinese communism and currently China’s military ally, to that same Immaculate Heart.  Failing this, the persecution of Catholics in China and indeed throughout the world will continue, precisely as the Virgin prophesied as the consequence of ignoring Her request: “[Russia] will spread her errors throughout the world, causing wars and persecutions of the Church…” And today that persecution continues in China with the cooperation of the Vatican itself — another sign of the unparalleled ecclesial crisis the integral Third Secret doubtless foretells.