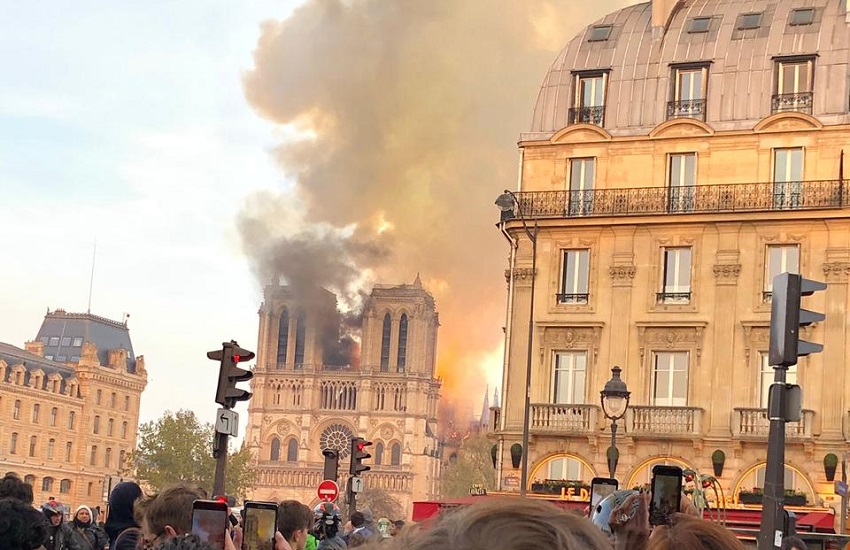 The Burning of Notre Dame: Tragedy and Hope

We don’t yet know who or what started the fire that ravaged Notre Dame Cathedral, although we have the right to be skeptical of the Parisian authorities’ immediate “ruling out” of arson as the cause of the conflagration, given the context of hundreds of acts of vandalism and desecration of Catholic churches in France over the past three years, including a fire at the Church of St. Sulpice, the second largest church in Paris. Then there was a foiled plot by “three female jihadists” to blow up Notre Dame itself with a car bomb back in 2016.  Nor can the occurrence of this disaster precisely during Holy Week be dismissed out of hand as a mere coincidence.

While we await the outcome of the “long and complex” investigation now underway, however, we can ponder the magnitude of the damage to this icon of the Catholic Faith and what it portends beyond the event itself.

First of all, the basic stone structure of the great cathedral and its irreplaceable stained glass, including the world-famous rose windows, appear to have been saved.  So was the relic of the Crown of Thorns along with the tunic of King Saint Louis. In fact, all of the cathedral’s relics are apparently safe, thanks to the heroic efforts of firefighters who formed a human chain and Father Jean-Marc Fournier, chaplain of the Paris Fire Brigade, who personally rescued not only the Crown of Thorns but also the Blessed Sacrament reserved in the tabernacle.

Esthetically speaking, however, the cathedral of Our Lady has been devastated.  It will take decades to complete a rebuilding project that will never really restore Notre Dame to the incomparable work of religious art it was for more than eight hundred years.  For one thing, the “cathedral’s roof cannot be rebuilt exactly as it was before the fire because ‘we don’t, at the moment, have trees on our territory of the size that were cut in the 13th century’” said Bertrand de Feydeau, vice president of preservation group Fondation du Patrimoine.

Nor can one easily envision how modern artisans would be capable of reproducing the religiously inspired detail of the collapsed spire, a relatively modern addition from the 19th century. Providentially, however, the spire’s copper statues of the twelve Apostles and those of the animals symbolizing each evangelist had been removed for restoration only days before the fire.

Yet, all in all, as Matt Gaspers and I discussed on the Mike Church Show yesterday, the truly irreplaceable religious treasures of Notre Dame de Paris — the relics and the awe-inspiring stone structure and stained glass, which direct the eye and the mind toward Heaven — have been saved. What is perishable and of neutral significance — essentially a massive amount of very old wood — has been burnt up.

Thus, if we are to view this evil event as we must view any evil in this world — a deprivation of a good from which God, in His inscrutable designs, will ultimately draw a greater good — then it is right to think of the partial destruction of Notre Dame as a beginning not an end. Perhaps this horrific event can also be seen as a metaphor in stone and wood for what must happen in the Church at large in order for the current ecclesial crisis to be brought to an end: the merely ephemeral must pass away while what is permanently valid remains and is recognized again for what it always was — the Church that is both ever ancient and ever new.

And so it will be when the Church and the world alike witness the Triumph of the Immaculate Heart of Her in whose honor the world’s most famous cathedral was built.