I have no intention of wading through the 67 pages of Christus Vivit, the post-synodal “Apostolic Exhortation” produced by Pope Francis’ scribes in the aftermath of the worse-than-useless “Synod on Young People, Faith and Vocational Discernment.”  The commentaries already published, even by “mainstream” sources little inclined to criticism of this pontificate, reveal a familiar pattern: a mixture of pious sentiment and neo-modernist shibboleths, the latter being the real intendment of the document. A few drops of strychnine in the bouillabaisse render the whole farrago fatal to sound orthodoxy.

Do I exaggerate?  The following passage alone proves the point:

“Although many young people are happy to see a Church that is humble yet confident in her gifts and capable of offering fair and fraternal criticism, others want a Church that listens more, that does more than simply condemn the world. They do not want to see a Church that is silent and afraid to speak, but neither one that is always battling obsessively over two or three issues. To be credible to young people, there are times when she needs to regain her humility and simply listen, recognizing that what others have to say can provide some light to help her better understand the Gospel. A Church always on the defensive, which loses her humility and stops listening to others, which leaves no room for questions, loses her youth and turns into a museum. How, then, will she be able to respond to the dreams of young people? Even if she possesses the truth of the Gospel, this does not mean that she has completely understood it; rather, she is called to keep growing in her grasp of that inexhaustible treasure.

“For example, a Church that is overly fearful and tied to its structures can be invariably critical of efforts to defend the rights of women, and constantly point out the risks and the potential errors of those demands. Instead, a living Church can react by being attentive to the legitimate claims of those women who seek greater justice and equality. A living Church can look back on history and acknowledge a fair share of male authoritarianism, domination, various forms of enslavement, abuse and sexist violence. With this outlook, she can support the call to respect women’s rights, and offer convinced support for greater reciprocity between males and females, while not agreeing with everything some feminist groups propose. Along these lines, the Synod sought to renew the Church’s commitment ‘against all discrimination and violence on sexual grounds’. That is the response of a Church that stays young and lets herself be challenged and spurred on by the sensitivities of young people.  (Christus Vivit, nn. 41-42)”

There we have it all: The Mystical Body of Christ is depicted as a narrow-minded, vain, fearful, insecure, condemnatory, defensive and even violently “sexist” male authority figure who “obsesses” over moral issues, clings to “structures,” does not fully understand the Gospel and must,  in order to regain humility, listen to young people, “respond to their dreams” and follow their “light.”

Why on earth would anyone feel compelled to belong to a Church thus depicted? Especially when the remedy for its enumerated deficiencies is not to teach the truth but rather to absorb the ill-defined counsel of “young people,” who are placed on a higher moral plane than the defective institution that has failed to listen to them.

What we have here is an absurd anthropomorphizing of the Church, reduced to a bundle of projections reflecting the insecure manhood of the authors of this effete diatribe. The divine Founder of the Holy Catholic Church, which is His Mystical Body, is a man par excellence who, to quote Pope Saint Pius X:

“‘[L]aid down with supreme authority the condition that we must belong to His Flock, that we must accept His doctrine, that we must practice virtue’ and who, while ‘kind to sinners and to those who went astray… did not respect their false ideas, however sincere they might have appeared. He loved them all, but He instructed them in order to convert them and save them…. He reproved, threatened, chastised, knowing, and teaching us that fear is the beginning of wisdom, and that it is sometimes proper for a man to cut off an offending limb to save his body.’”

This Christ, Pius X concluded, represents “something quite different from an inconsistent and impotent humanitarianism.”

But what the authors of Christus Vivit present in place of Christ and His Gospel is a congress of sissies fretting over how they can make their teaching even more irrelevant to the salvation of souls. The Church has endured many a crisis in her long history, but never — absolutely never — has she suffered the crisis of being so humiliatingly unmanned by her own leaders.

It will be the most exquisite of heavenly ironies that the “woman clothed with the sun, and the moon under her feet, and on her head a crown of twelve stars (Rev 12:1)” — Mary, Queen of Heaven — will usher in a restoration of manhood in the Church’s human element in the name of Christ the King. 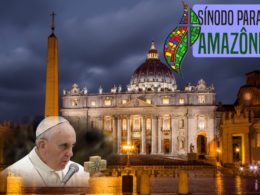 The Archbishop of Adelaide, Australia, has been convicted of failing to report the sexual abuse of minors by…
byEd Faust 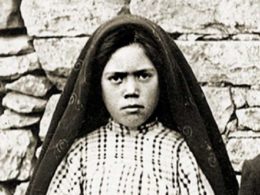 In Memory of Sister Lucia, Apostle of the Immaculate Heart of Mary

Today is the 15th anniversary of the death of Sister Lucia,[1] the last remaining of the three children…
byThe Fatima Center
One comment 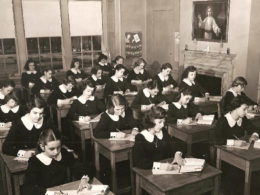 May Catholic Children Attend Government-run Schools? This question touches on several important topics, including amongst others: What is…
byMatthew Plese
9 shares
9
0
0
0
No comments