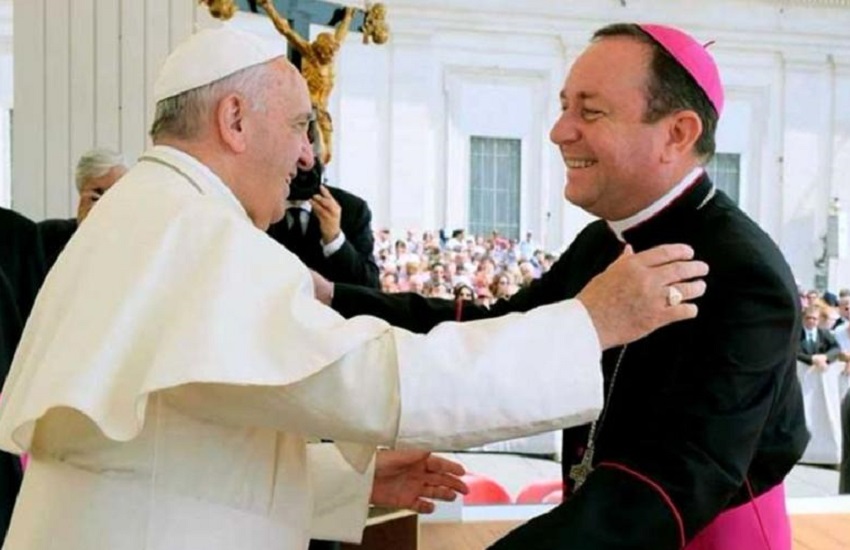 There’s No Business Like Show Business: “The Protection of Minors” Summit

ABOVE: Francis and his “spiritual child” Bishop Zanchetta
(on the lam from morals charges in Argentina)

In two days (February 21) the Vatican will launch another of the publicity stunts that have taken the place of rightful governance of a Church now harvesting the bitter fruits of an epochally reckless attempt to update her in a vain appeal to the sensibilities of “the modern world.”  I mean the so-called summit on “The Protection of Minors.”

Protection from whom?  From a homosexual-infested clergy whose emergence has been presided over and even protected by many of the prelates participating in this farce, who continue to pretend that “protection of minors” is the only issue while homosexual activity among homosexual clerics and “consenting adults” is resolutely covered up.  Covered up by Pope Francis himself, as LifeSiteNews reports on the Bishop Zanchetta affair, involving another friend of Francis, his “spiritual child,” with a penchant for homosexual activity. Like the notorious Battista Ricca, “prelate of the gay lobby”, the friend that Francis made head of the so-called Vatican Bank, Zanchetta, on the run from sex crimes allegations in Argentina, has found a home at Casa Santa Marta, along with a Vatican sinecure created just for him.

We are told, on the one hand, that the sexual abuse of minors by priests is largely a problem of the past and that now there are far fewer occurrences. But, on the other hand, the Vatican’s website dedicated to this off-off-Broadway production on the Tiber declares that the Church is “Faced with a problem that shows itself more and more present and serious in different geographical areas of the world and of the Catholic Church” so that now “the highest representatives of the different ecclesial communities” — meaning the Presidents of Bishops’ Conferences and heads of religious orders — must rush to Rome “to give a united response at the universal level.”

It’s an emergency!  But then again, not really. For as Francis said during his inflight presser on the way back from his useless trip to Panama, “I permit myself to say that I’ve perceived a bit of an inflated expectation” regarding the upcoming summit. “We need to deflate the expectations to these points [sic] that I’m saying. Because the problem of abuse will continue. It’s a human problem, but human everywhere.”

After all, how can anyone expect a mere Pope to rid the Church of the scourge of child-molesting priests who are mostly homosexuals? The Pope must devote his energies to more realistic projects, like “eliminating poverty and promoting social equality” in various nations, while those same nations “limit the growth in global warming to below 2° centigrade, based on preindustrial levels, and, if possible, to below 1.5° centigrade.”

Poverty, inequality and CO2 emissions are not “human problems” that will continue everywhere, like child-molestation by priests.  No, these are problems that can be solved!

I pray the reader forgive the bitter sarcasm.  But just how much of a joke this sham summit will be is shown by the list of ecclesial radicals that will address the assembly and the titles of the palaver they will deliver (courtesy of LifeSiteNews):

In short, a snooze fest of endless droning during which the hot air filling the room will make wakefulness a matter of heroic virtue.

It’s all show business, and inept show business at that. The ecclesial state of affairs we now witness is as blackly comical as it is disastrous.  One laughs so as not to cry.  But Heaven is not laughing, nor will laughter be heard on the day of reckoning for those who have been complicit in what Paul VI lamented — too little, too late — as the “self-demolition” of the Church.  That self-demolition being the very subject of the Third Secret of Fatima.