Icon of a Disastrous Papacy 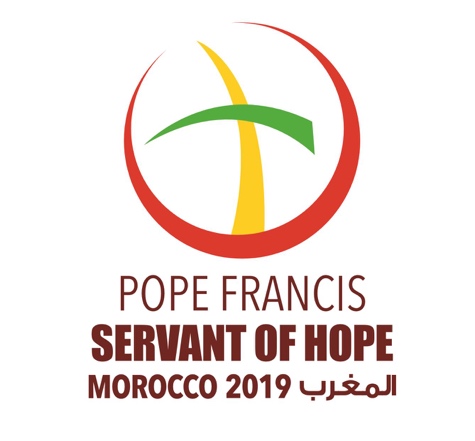 Behold the logo for the Pope’s upcoming useless trip to Morocco: the crescent moon symbolizing the religion invented by Muhammad almost completely encircles a distorted Cross. Given this Pope’s obsessive promotion of the mass migration of Muslim males into Western European capitals, including Rome itself, the image suggests that the body of Christian faithful the Cross is supposed to represent now have almost no avenue of escape from what Pope Pius XI, in saner times, called “the darkness of Islam” in a prayer traditional Roman Catholics still recite today on the traditional Feast of Christ the King.  As that prayer, the Act of Consecration of the Human Race to the Sacred Heart of Jesus, declares: “Be Thou King of all those who are still involved in the darkness of idolatry or of Islamism, and refuse not to draw them into the light and kingdom of God.”

This absurd and offensive logo has deeper layers of malign significance.  As the dutifully Vatican party line organ Zenit explains, the “cross and a crescent… represent the interreligious dialogue between Christians and Muslims.” But what is depicted is not a dia-logue, from the Greek dialogesthai, meaning a conversation between two or more parties, dia — “across” or “between” — but a distance that separates them, a distance no dialogue between the religion founded by God and that founded by Muhammad will ever eliminate. What we see, rather, is one “dialogue” party, Islam, visually engulfing the other: i.e., Catholicism, represented by a distorted Cross that in turn represents a distorted Church in the throes of the worst crisis in her history.

But there is more. To quote Zenit, the logo features “[t]he colors of the 2 countries: green and red for Morocco, yellow and white (the background) for the Vatican.” Notice that the green for Morocco is depicted in the horizontal beam of the Cross, whereas the red for Morocco is seen in the crescent that almost complexly surrounds and engulfs the Cross.

Fully 99% of Moroccans are Muslims, whereas the miniscule number of Christians in the country are almost all foreigners. Moreover, in Morocco “it is a criminal offence to possess a Christian Bible written in the Arabic language, part of a wider law prohibiting proselytisation of Muslims to any other belief,” while the Moroccan constitution establishes Islam as the sole religion of the Moroccan state.  There is no “dialogue” between Christianity and Islam in Morocco, but only a monologue favoring Islam with the force of law. If the placement of the colors in the logo signifies anything, then, it is the engulfment of Christianity by Islam, even to the extent of becoming an element of a distorted Cross representing the subjection of Christ by Muhammad.

Finally, to quote Zenit again, the logo declares that Pope Francis is the “Servant of Hope” — yet another contribution to the cloud of empty slogans that have plagued the Church since Vatican II, and about as meaningful as “Servant of Optimism” or “Servant of Cheerfulness.”  What exactly is the “hope” that Francis serves? We haven’t the slightest idea. We do know for certain, however, the hope that Francis does not serve.  The hope expressed by the Mother of God at Fatima: “In the end, My Immaculate Heart will triumph. The Holy Father will consecrate Russia to Me, and she shall be converted, and a period of peace will be granted to the world.”

And by peace, Our Lady meant the farthest thing from the program Francis advances in this final stage of the post-conciliar crisis in the Church.  To quote Pius XI in a landmark encyclical that has been buried and forgotten in a toxic mountain of ruinous post-conciliar novelties:  “Men must look for the peace of Christ in the Kingdom of Christ” whose “empire includes not only Catholic nations, not only baptized persons who, though of right belonging to the Church, have been led astray by error, or have been cut off from her by schism, but also all those who are outside the Christian faith; so that truly the whole of mankind is subject to the power of Jesus Christ.”

Only when that truth of revelation has been rediscovered and proclaimed anew by the wayward human element of the Church, above all the man who holds the office of Roman Pontiff, will this crisis be over at last.