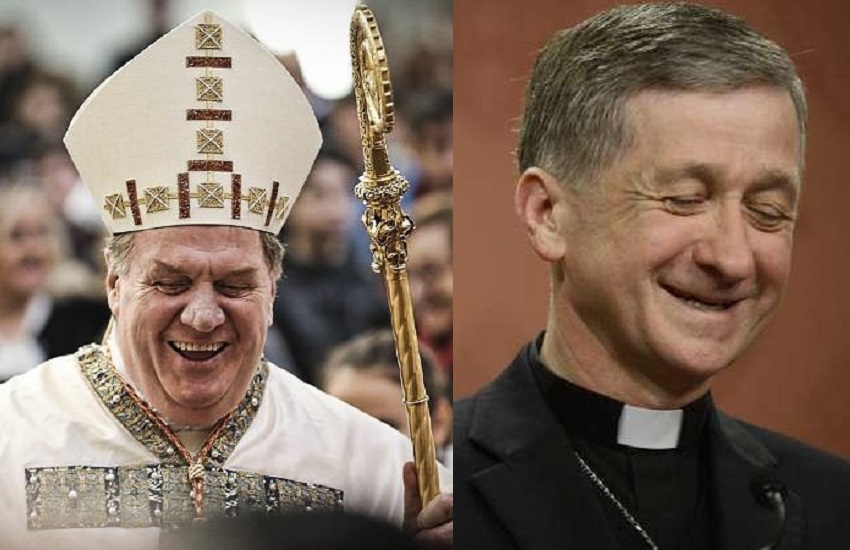 Would You Buy a Used Synod From these Men?

The upcoming Synod on Youth, Blah, Blah, Blah is comprised of bishops chosen by national and regional episcopal conferences along with 29 chosen by the Pope.  The United States Conference of Catholic Bishops chose neither Cardinal Joseph Tobin nor Cardinal Blase Cupich (pictured above).

Small wonder: they are both blatantly pro-“gay” progressives, and both were elevated to the rank of cardinal on the advice of none other than ex-Cardinal McCarrick, according to the testimony of Archbishop Viganò, concerning which Francis continues to take the Fifth while impliedly likening the Archbishop to Satan the Great Accuser.  (That Satan is a false accuser, while Viganò speaks the truth Francis refuses to address, is a point that would be lost on anyone who does not bother to check the scriptural references Francis twists, in his usual manner, to suit the rhetorical needs of the moment.)

But Francis has not disappointed his two friends (nor the one who recommended them for cardinals’ hats). He has numbered them among the 29 papal appointees to the Synod.  So they will both be there along with the rest of the synodal assembly, doubtless helping to engineer the next synodal debacle.

And a debacle it will certainly be, barring unforeseen developments.  Even George Weigel is alarmed.  As LifeSiteNews reports, he describes the Synod’s Instrumentum Laboris [working document] as “a 30,000+ word brick, a bloated, tedious door stop full of sociologese but woefully lacking in spiritual or theological insight.” The document, he continues, “has little to say about ‘the faith’ except to hint on numerous occasions that its authors are somewhat embarrassed by Catholic teaching – and not because that teaching has been betrayed by churchmen of various ranks, but because that teaching challenges the world’s smug sureties about, and its fanatical commitment to, the sexual revolution in all its expressions.”

LifeSite further notes that “The working document also mentioned ‘LGBT youth,’ the first time the loaded phrase has ever appeared in a Vatican document.”  Moreover, LifeSite links to an “open letter” by “eight young Catholic priests [who] remarked that the working document fails to counter sexual immorality.”

Worse still, Francis has just promulgated a new Motu Proprio, Episcopalis Communio, which even Church Militant, whose policy used to be No Criticism of the Pope Whatsoever, describes as “a perfect Trojan horse” because it converts the “universal synod”, already a novelty invented by Paul VI, into an arm of the Magisterium immediately upon the Pope “ratifying” its parliamentary-style deliberations and conclusions, which would instantly become part of the “ordinary Magisterium” without any vetting by Vatican dicasteries, above all the Congregation for the Doctrine of the Faith.

The result, says Church Militant, is that the “Roman Curia is now officially emasculated in its ability to safeguard the Church from the innovations of revolutionaries. Not only has the Roman Curia been sidelined, but even worse, the normal body that has historically been called to discern, discuss and decide upon substantive change to the Church’s doctrinal texts and disciplinary norms — the ecumenical council made up of the Pope together with all of the world’s bishops — will be dramatically undercut in its prerogatives and unique voice as successors to the Apostles by far smaller and select groups of bishops and papal appointees.”

It should go without saying — as Father Gruner always rightly insisted, merely observing the obvious — that if the result of this new process were a teaching that contradicts what the Church has always taught and believed, it would not really belong to the “ordinary Magisterium” but rather would be a mere counterfeit, as the true Magisterium, like God Himself, does not contradict itself.  The Church does not, indeed cannot, teach “the innovations of revolutionaries” as authentic doctrine.

At the upcoming Synod, with rumbles of “gay acceptance” growing louder, the “far smaller and select group[] of bishops and papal appointees” will include the likes of Tobin and Cupich, key exponents of a “gay”-friendly Church.

Brace for impact.  But also pray for a new Pope.  A holy and courageous Roman Pontiff who will act boldly to rescue the Church from this worsening disaster — beginning with the Consecration of Russia to the Immaculate Heart of Mary.

Just after my column went to press, it was announced that Cardinal Tobin will not be attending the Synod on “Youth.”  Apparently his appearance did not pass the smell test.