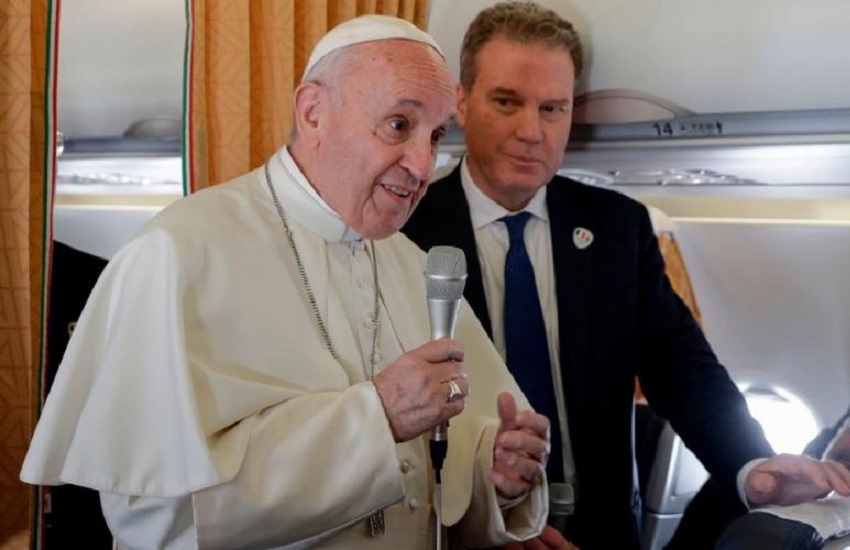 Confronted with the damning accusations against him in the written testimony of Archbishop Carlo Maria Viganò, former apostolic nuncio to the United States (2011 to 2016), given under oath, the Pope gave this answer during his usual airborne press conference (this one  during the return flight from Dublin after the utterly useless spectacle of the “World Meeting of Families”):

“Read the statement carefully yourselves and make your own judgment. I am not going to say a word about this. I believe that the statement speaks for itself, and you all have sufficient journalistic ability to draw conclusions. It is an act of trust. When a little time goes by, and you have drawn conclusions, perhaps I will speak about it, but I would like your professional maturity to do this work. It will do you all good, really.”

In the United States this kind of answer to a question is called “taking the Fifth” — meaning an invocation of the Fifth Amendment privilege against self-incrimination, which precludes an accused from being forced to testify against himself. The usual form for invoking this Constitutional privilege is: “I decline to answer on the grounds that the answer might tend to incriminate me.”  That in essence is what Francis said to the inquiring reporter, and the inference is inescapable:  He cannot deny the allegation because it is true; and precisely because it is true he will not say a word about it.

But there is more here, and it bespeaks breathtaking arrogance:  Francis suggests to the reporter and her colleagues that they should parse Archbishop Viganò’s 11-page declaration and “draw conclusions” in what he calls “an act of trust” on his part.  There is no mistaking the intention: Francis “trusts” that the sycophants in the Vatican press corps, who had never — before this case — asked Francis a single hard question about his disastrous governance of the Church will find some way to discredit the Archbishop’s testimony.

That is why Francis adds: “When a little time goes by, and you have drawn conclusions, perhaps I will speak about it, but I would like your professional maturity to do this work.  It will do you all good, really.”  In other words, if their “conclusions” discredit the statement, Francis will have nothing further to say.  If not, “perhaps” he will comment further.  Or perhaps not.

This is not the behavior of a Roman Pontiff. It is, rather, the way a shifty politician behaves in addressing a political scandal that has suddenly engulfed him in the middle of his term.  He is hoping to ride out the storm in the hope that the scandal will be forgotten in the next news cycle.

To his credit, Bishop Thomas John Paprocki of the Diocese of Spingfield, Ilinois has issued a statement calling out Francis for his avoidance of truth-telling:

“When asked about this aboard the papal plane on his return flight from Ireland on August 26, Pope Francis said, ‘Read the statement carefully and make your own judgment. I will not say a single word on this.’ Frankly, but with all due respect, that response is not adequate. Given the gravity of the content and implications of the former Nuncio’s statement, it is important for all the facts of this situation to be fully reviewed, vetted, and carefully considered. Toward that end, Pope Francis, Vatican officials and the current Apostolic Nuncio should make public the pertinent files indicating who knew what and when about Archbishop (formerly Cardinal) McCarrick and provide the accountability that the Holy Father has promised….

“The recent letter of Archbishop Carlo Maria Viganò brings particular focus and urgency to this examination. The questions raised deserve answers that are conclusive and based on evidence.”

It must be said: Francis has shown utter contempt for the faithful and the Mystical Body of Christ in refusing to address credible evidence that he rehabilitated and elevated to a position of authority a man he knew to be a monster who had spent decades preying sexually upon boys and young men.

At this point the faithful are entitled to ask themselves regarding Francis: “Who is this man who sits upon the Chair of Peter?”  Truly, the Church has never seen anything like him in the entire history of the papacy. Nor has the Church ever seen a crisis like the one this Pope has brought to a level that can only be called apocalyptic.

Our Lady of Fatima, pray for us.