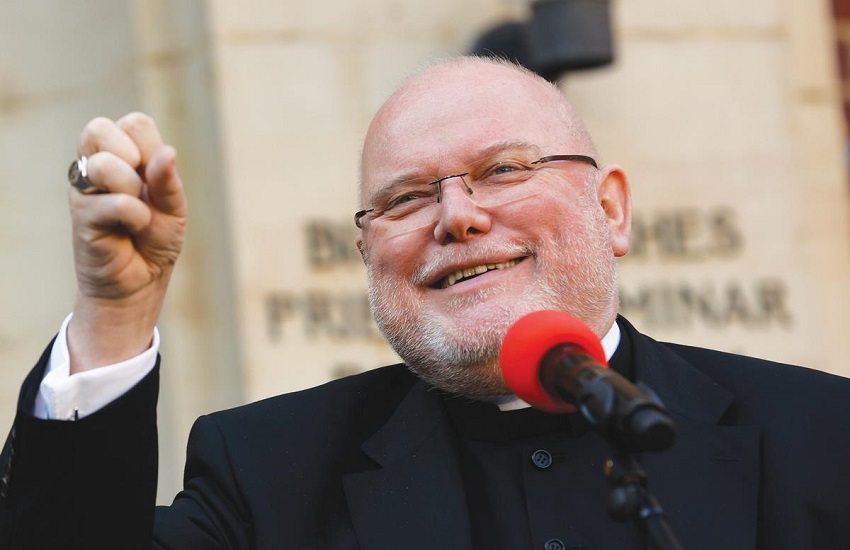 Francis’ Scarlet Letter: A Little “F” from Francis Gives the Schismatic German Bishops Everything They Want

In my skeptical column of June 5 on the Vatican’s supposed “rejection” of the corrupt German hierarchy’s plan to distribute Holy Communion to Protestants (opposed by a few members who still have the Faith), I noted the obvious:  the Congregation for the Doctrine of the Faith (CDF) had not rejected the plan as such, but only its implementation by the German bishops’ conference as a whole.  The CDF’s letter, however, clearly implies that this mass sacrilege could be perpetrated by each local bishop, interpreting Canon 844 to permit intercommunion for “grave reasons” in his particular diocese.  In other words, destroy the Church the right way: one diocese at a time, as is being done with the admission of public adulterers in “second marriages” to Holy Communion.

Now we have written confirmation of Francis’ intention.  As Maike Hickson at One Peter Five reports, during his meeting with German bishops at the Vatican on June 12, stacked in favor of Cardinal Marx and other advocates of the plan, Francis signed a note agreed to at the meeting according to which the CDF has not forbidden anything, but merely “‘gives some recommendations,’ and ‘does not give instructions’ to the German bishops.” Moreover, while the text cannot be published as a document of the German bishops’ conference, it can be used as “an ‘orientation guide’ for bishops who ‘wish in their diocese to work out criteria in accord with can. 844 CIC’” and can also “be made public for the use of the bishops.”

Here is how Pope Francis’ “signature,” now being touted as a papal authority by Cardinal Marx, appears on the note: “F 12-6-18”.  That is, Francis wished to green light the sacrilege, diocese by diocese, but did not wish to sign his entire name to the document unleashing it, evidently because of an instinctive refusal to commit fully the authority of the papacy to this incredible act of ecclesial destruction.  In accordance with his general modus operandi, Francis prefers the wink and the nod to an explicit papal endorsement of heresy and sacrilege.  A little “F” will do to signify his agreement to let each bishop do what he cannot authorize as Pope, but wishes to give the impression he has authorized.

Father Gruner never ceased to denounce the fakery by which the entire Church has been subverted since Vatican II: the false appearance of a command where none has actually been given and none can be given because no command destructive of the Faith can be anything but void ab initio, no matter what a piece of paper may say.  So it was with the non-existent “banning” of the Latin Mass — a fraud exposed by Benedict XVI in Summorum Pontificum. So it was with the “Papal Rescript” that Francis authorized Secretary of State Pietro Parolin to issue, stating that the “intrinsically impossible” permission to administer Holy Communion to public adulterers is “authentic Magisterium.”

And so it is with the Scarlet Letter of Francis, the little “F” — “F” for fraud — that earns him another page in the annals of infamy that will be written someday about this disastrous pontificate, if there is anyone left on the earth to write the history of this time after the divine chastisement that seems more likely with each passing day.