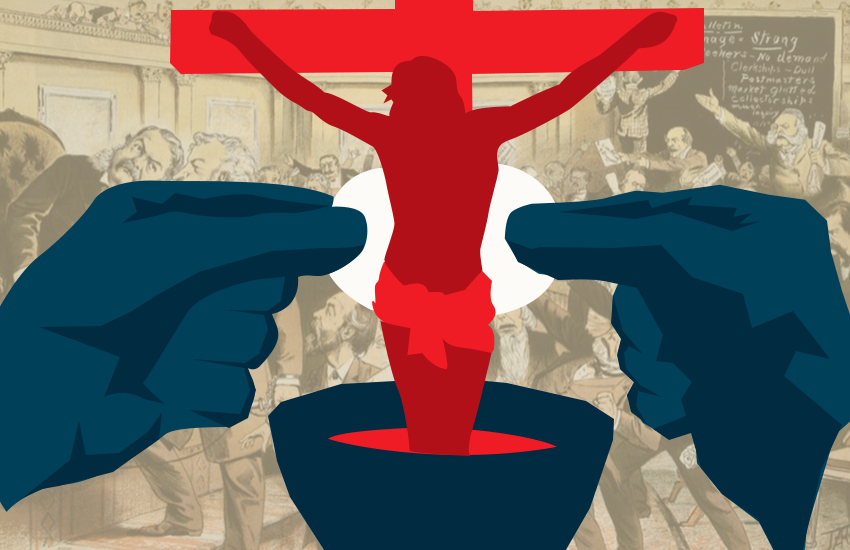 Perhaps you have heard something like the following expressions: “I am a true liberal, I do not believe that the government should be acting like this,” or “The Left today is anti-liberal, we need to recapture Classic Liberalism to save our democracy.”

Since I have been living through a strict lockdown for what seems like a decade at this point, I have often heard these sorts of statements both in person and on podcasts/videos, from those who would not say they are ‘conservative’ but who decry the abuses of government. It is interesting, because although I disagree with the idea that there is technically a ‘good liberalism,’ I do understand that on a basic level people are appealing to their sense of right and wrong, and trying to find a way out of what has happened.

We live in a culture where the epitome of civilization has almost always been presented to us as a form of Liberalism. Perhaps we exalt the so-called ‘American Dream’ of rugged individualism and ‘not being told what to do’; or, we see the Leftist rendition of Liberalism by way of a so-called ‘Democratic Socialism’ that will give us a mythical ‘equality’ and inclusion that will erase all differences to create some sort of utopia… more like a dystopia.

In reality, we are all likely to be liberals unless we study extensively and really consider ideas. Even those of us who are socially conservative will still promote the ‘democratic process’ as a way of promoting conservative values; we do this without realizing that this process is a liberal invention par excellence. Perhaps we recognize the encroachment of the State in our Church, and thus bang the drum of ‘Religious Freedom!’ as a solution to our ills; all the while forgetting that there can be no religious freedom as the world sees it, because error has no rights.

At root, we are often liberals, even if pious Catholics, because our concept of liberty is partial or flawed. Ask the average person to define liberty, and I would imagine they would define it as the ‘absence of restraint.’ This means that we are ‘free’ so long as we have the liberty to act as we see fit. This is of course an aspect of liberty in the truest sense, but it is only a portion of the full meaning. Ultimately our true freedom is in God, as He is our source of life, the Alpha and Omega. So, it only follows that for us to live with real liberty, we must not only be free to ‘do what we want,’ but instead ‘do what God wills.’

I have spoken extensively about Liberalism in articles and in videos before, so I will not go on about it here, but suffice it to say, it is an erroneous philosophy. But, we live in a time when most of the more sensible people would call themselves ‘Classic Liberals’; thus, perhaps it is worth exploring how we might explain the errors of Liberalism to someone, while at the same time finding common ground.

I understand that in this age of endless ‘dialogue’ that this might seem like a fool’s errand; however, we can look at Saint Paul who spoke with the philosophers and sensible men of his day. He of course called our errors, but still found ways to speak the language of the intellectual class in order to share the Good News. The Church has always operated this way, and we ought to recognize an opportunity to do so when we can.

To begin with, we find common ground. Again, not some amorphous dialogue where we pretend we don’t have real differences, but instead legitimate principles that are true and good and which we share. For example, a thoughtful Catholic and a sensible liberal can both agree on the overreach of the State with regards to lockdowns and medical tyranny. These are true evils, and allying against them is a good thing. In addition, although we don’t believe in an unadulterated ‘freedom of speech,’ we can both agree that it is wrong for a tyrannical government to censor true information that would be otherwise helpful to people. Furthermore, we might agree that a corrupt State should not tell us how to educate our children, as that is the right of parents and not bureaucrats.

These three examples are easy to discuss with a Classic Liberal, and could provide a true common ground for reasonable discussion. However, when you move beyond the shared recognition of the problem, it is likely that the proposed solutions of Catholics and Liberals will be in conflict. I would say that it is wrong for a government to shut my Church in this manner, because Christ is King and He established a Church; whereas the Liberal might say that all religions should be able to worship when they want, because that is their choice.

With regards to censorship, I would imagine that the Liberal would suggest that the remedy to censorship is ‘being able to say whatever you want,’ which of course is ultimately part of the problem, as this is a reality that propagandists exploit. And concerning education, a Liberal would likely propose that we need ‘school reform’ and a true public education, without considering that it is public education that has not given us an educated public.