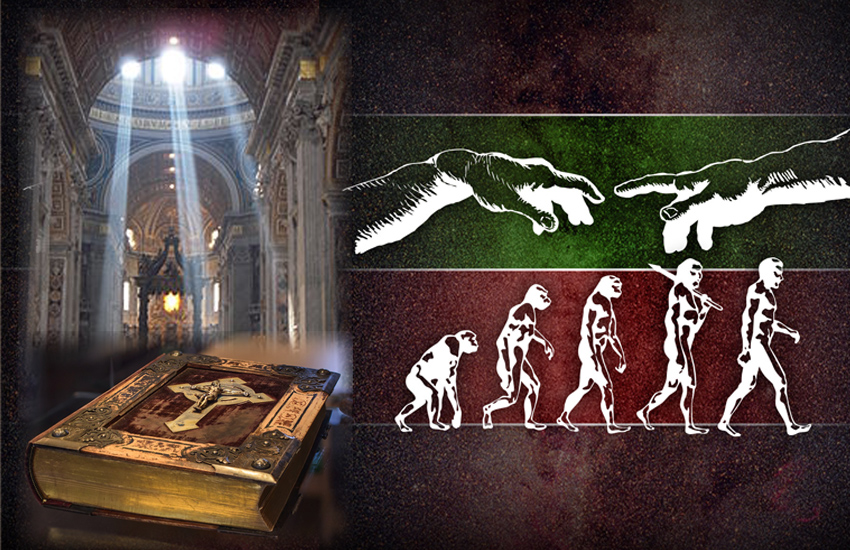 Part 10 – Basic Catechism on the Bible

Evolutionary thinking is, in my opinion, the Devil’s magnum opus. I believe it is foundational to our fallen nature. Throughout contemporary Catholic scholarship, Darwin’s ideas are the lens through which so many scholars study, whether they know it or not. In fact, I have never received more backlash in my career as a teacher, than I have when teaching against the demonic musings of Darwin.

I could write hundreds of pages on the disaster that is inherent in evolutionary thinking. For the sake of brevity, we will focus on two main ways in which evolutionary thinking destroys biblical understanding. First, in this article, we will consider how evolution is nothing more than pseudoscience. It destroys a truly scientific approach to Scripture, which is actually quite helpful. Second, in next week’s article, we will discuss how evolutionism is gnosticism in modern trappings and nothing more than a rebirth of ancient heresies.

The term “pseudo-science” means the incorrect application of natural scientific tools in order to explain that which is not proper to the natural sciences. It can also mean poor scientific scholarship, which is often motivated more by ideology than by evidence and right reason. Evolutionary theory fits both of these definitions.

Inherent in the practice of legitimate scientific inquiry is the necessity of observation as the first principle.[1] In order for something to be researched scientifically, the problem or process must be observable. For example, medical researchers begin their pursuit by observing the symptoms of a disease. Next, they will exhaust all avenues in order to find empirical data that helps to facilitate a cure. They may test biological samples of the disease with medicines or other remedies. They conduct many experiments often tweaking just one variable to properly document its effect. They continue to conduct experiments, until they have repeatable, consistent, verified and predictable results. In the end, if this process has yielded a cure, they can be reasonably sure of the cure’s reliable efficacy. They will have observed results in real time, and tested their methods on multiple occasions in a variety of environments to ensure exactitude.

Absolutely none of these actions take place in evolutionary research. Some may object and point to loads of “research” done by evolutionists. It is worth remembering that since evolution conveniently requires eons of time, nothing can be observed in the present.[2] At best, it is an inferential practice that requires stretched assumptions about unseen environments that apparently scale hundreds and thousands of centuries. In reality, a truly scientific approach to the past and the development of the world would be a historical approach.

The term “history” comes from a Greek word that means “wise man” and “narrative.” Historical research is truly a science, in that it is an investigative approach into actual events recorded by our ancestors. Our ancestors observed things, lived through them, and in many cases even recorded them. Looking at the past with natural science as the tool is an improper usage of the discipline. When we look into the ancient writings of all cultures with recorded history, we find a consistency that much more resembles Genesis than it does Darwin.

The evolutionary myth presents us with a “primordial ooze,” out of which all life supposedly began. We are led to believe that somehow, by magic or some other inexplicable process which has never been observed and for which no empirical data exists, simple life forms developed into much higher and complex life forms.

In debunking evolution, my university physics professor offered the following example. Suppose you have a junkyard which contains the parts of five hundred Model T Fords. Let’s further assume that all five hundred were working vehicles but they have been completely disassembled, down to the last nut and bolt, with all the parts strewn across this junkyard. Now a tornado blows through the lot. What are the chances that following the tornado’s passing, we will have one pristine working Model T sitting in the yard? The answer is obvious. Not even if we ran this experiment a billion times would the end result yield a fully functioning car. It is an impossibility because a random force of nature cannot bring about complex hierarchical and well-organized order. In our thought experiment, we actually started out with the working parts of a Model T, yet the theory of evolution does not even posit such an organized beginning!

Instead, we are supposed to believe that over millions of unseen years primordial biological ooze developed by ‘natural’ and ‘spontaneous’ processes into the current form of homo sapiens. Quite frankly, the pagan myths which posit that various magical forces or false gods created humans is far more believable than the pseudo-science of random evolution.[3] Yet evolutionism tyrannically demands even more. It insists that the current “evolved” form of hominid now sits on the throne of Darwinism from which he judges the state of mankind. According to the revelatory nature of this diabolical logic, mankind may in fact evolve into something else! This luciferian idea then justifies all sorts of inhumane philosophies.

Even if we allow room for mystery in the interpretation of the first three chapters of Genesis, following the example of Saint Augustine, there is still no possible way to reconcile evolution with the Faith.[4] Those who hold on to evolution as a doctrine will ultimately deny dogma and doctrine in order to appease the ape-gods of evolutionary theory. Everything from religious indifferentism to feminism are all justified by an evolutionary approach to truth and reality, as all doctrines can “evolve” with time.

It is a most devilish and disgusting attack on the saving truth of the Bible and should be rejected by all Catholics. Lucifer himself is the architect of this hellish hypothesis, and I pray that in the future this deception will be squashed, once and for all.

[1] Most students today, even at the elementary school level, learn about the Scientific Method. This method was pioneered by Roger Bacon, a Catholic English Franciscan friar who has been referred to as the “Father of Modern Science.” The Scientific Method is based upon observation, developing a hypothesis, testing the hypothesis through repeated experiments, establishing scientific controls which limit the possible variables, carefully recording measured values, and conducting the same experiments by independent scientists so as to verify the findings.

Yet none of these steps are possible when it comes to evolutionism. No human has ever observed evolution; that is, the evolution of one distinct species into another altogether different species. No human has measured any of its variables, no human has been able to conduct controlled experiments to observe this process, and no human has measured it. All the tools which we correctly associate with the natural sciences are ultimately based on observation which is not possible when it comes to evolution. This is because no animal species are currently evolving into different animal species by the Darwinian theory of natural selection. Hence, it is correct to refer to evolutionism as a pseudo-science masquerading as legitimate science.

[2] Yet isn’t it odd that no one has even witnessed at least some species in a transitory process of evolution? If evolution was a naturally occurring process as its proponents claim, why do we not at present witness some species in the process of evolving into others? Considering that we have extensive historical records for the past two thousand five hundred years (The Histories of Herodotus were written ~450 BC), why is there no record at all of humans observing animal species in the process of evolving into different species?

[3] A classic book for dismantling the scientific pretenses of evolutionism is Darwin’s Black Box by Michael Behe (2006). I would encourage every person to read this book before attempting to defend evolution as true science. A simpler book, geared towards a 9th grade reading level, which likewise debunks evolutionism on scientific and philosophical principles is Defeating Darwinism by Opening Minds written by Philip Johnson (1997).

[4] An excellent talk on how evolution is incompatible with the Faith was given by Fr. Brian Harrison, titled “Man, Thou Art Dust: Scripture, Tradition and the Magisterium on the Special Creation of Adam.” Fr. Harrison effectively demonstrates why so-called “theistic evolution” is contrary to Church Teaching. Theistic evolution is an idea that acknowledges God as the ultimate Creator, but erroneously argues that He used an “evolutionary process” to create man. For example, that God made apes, ‘guided’ their development, and at some point infused a human soul into one of them, thus creating Adam.