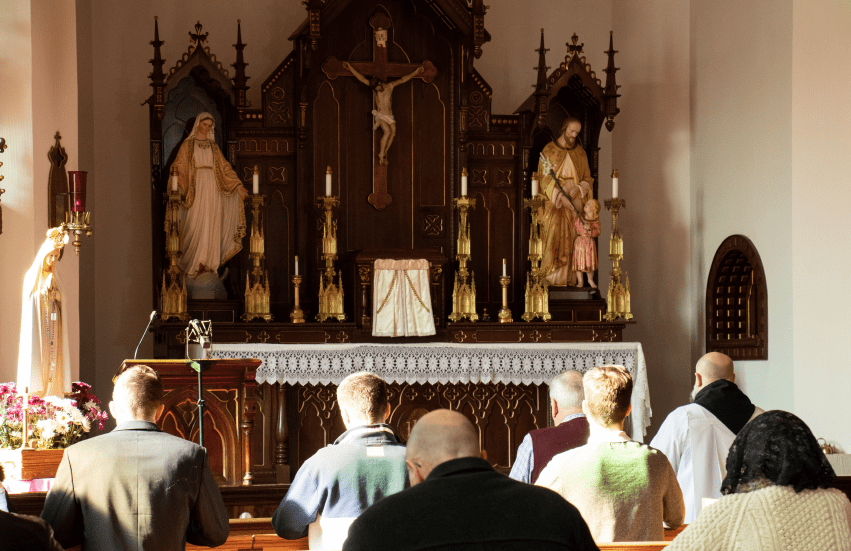 (Read What Are Sacramentals and Why Have Them Blessed?)

What Is the Sabbath Day?

Sunday is the preeminent holy day of the week. It is the day we refrain from servile work, attend Mass, devote ourselves to prayer, and engage in recreation, family time, and true leisure. But even some Catholics are surprised to learn that the original day of rest for the Jews was Saturday, not Sunday.

If Saturday is the Sabbath day, then why do we keep Sunday holy? Did the Church change the Sabbath day? Is working on Saturday a sin too since it does not, strictly speaking, keep ‘the Sabbath’ holy? Should we honor both days?

Unlike what Seventh-day Adventists or Seventh Day Baptists allege, the observance of Sunday instead of Saturday is not an “invention” of the Catholic Church. The change reflects the ultimate authority of the Apostles to govern the Church on earth – a charge given to them directly by Our Lord.

Sunday, the first day of the week, is honored multiple times in Sacred Scripture as the day to come together for the Holy Sacrifice of the Mass:

In just a few examples we read quite clearly that the old Sabbath has been replaced by Sunday, which is the Lord’s Day, by virtue of our Redeemer’s Resurrection on Sunday:

“[T]hose who were brought up in the ancient order of things [i.e., Jews] have come to the possession of a new hope, no longer observing the Sabbath, but living in the observance of the Lord’s day, on which also our life has sprung up again by him and by his death” (Letter to the Magnesians, Chp. 9, by St. Ignatius of Antioch, c. 110 AD).

Another excellent source on this teaching comes to us from St. Justin Martyr (†165 AD). Already in the second century, he was explaining to the Roman Emperor Antonius Pius (138-161) why and how the early Christians kept Sunday holy. He wrote:[2]

“But Sunday is the day on which we all hold our common assembly, because it is the first day on which God, having wrought a change in the darkness and matter, made the world; and Jesus Christ our Saviour on the same day rose from the dead. For He was crucified on the day before that of Saturn (Saturday); and on the day after that of Saturn, which is the day of the Sun, having appeared to His apostles and disciples, He taught them these things, which we have submitted to you also for your consideration.”

The Authority of the Church

The issue of observing Sunday as the holy day is ultimately based on the authority of the Church which Our Lord created and to which He entrusted the power of binding and loosing (cf. Matthew 16:18). The fact that Protestants do not keep some of the Catholic Church’s laws (e.g., fast and abstinence) but do generally believe in Sunday instead of Saturday worship is just one of their inconsistencies.

Father Stephen Keenan, in his Catechism from 1898, aptly writes:

“Ask [the Protestant] why he keeps Sunday, and not Saturday, as his day of rest, since he is unwilling either to fast or to abstain. If he reply that the Scripture orders him to keep the Sunday, but says nothing as to fasting and abstinence, tell him the Scripture speaks of Saturday or the Sabbath, but gives no commandment anywhere regarding Sunday or the first day of the week. If, then, he neglects Saturday as a day of rest and holiness, and substitutes Sunday in its place, and this merely because such as the usage of the ancient Church, should he not, if he wishes to act consistently, observe fasting and abstinence, because the ancient Church so ordained?”

In Galatians 5:1-6, St. Paul stated that the observance of circumcision and the requirements of the Law of Moses from the Old Testament were abrogated and no longer binding. The only remaining elements of the Old Testament that are required are the moral law – the ceremonial laws are not. And that is why the requirement for wearing tassels on your clothes (cf. Deuteronomy 22:12), abstaining from pork or shellfish, or not using two different species to plow a field at the same time are abrogated. The Jews count 613 different laws, but all ceremonial laws no longer apply since the New Testament has completed and fulfilled the Old Testament.

These laws were fulfilled in Christ and replaced with the New Testament law of grace and love. In the same manner, the moral law of honoring the Lord’s Day is fulfilled in Sunday worship. The ceremonial law concerning Jewish Sabbath has ceased by virtue of Christ. This is not the doing of the Catholic Church. God Himself fulfilled the Jewish Sabbath and replaced it with Sunday, the Lord’s Day, the “Eighth Day.” And the Apostles and their contemporaries declared this as such.

The Church Fathers developed a powerful theology about the “Eighth Day.” The first six days were the days of Creation, the Seventh Day was the day on which God the Father rested. When the Incarnate Son in turn came down to earth, His work – in theological figure – began on that same “Seventh Day”.[3] Naturally, this shows His divine work is in continuity with that of His Father. His Resurrection then occurred on the Eighth Day (Sunday), which is the First Day of the New Creation[4] and New Covenant in Christ’s Blood.

Thus, by Christ’s own example, the Apostles and all early Christians knew the day which they were meant to keep holy was indeed Sunday.

Here it is very important to note that only God Himself can change or abrogate His laws.[5] Since the day meant to keep holy was adjusted from Saturday (Old abrogated Covenant) to Sunday (New Covenant) by Jesus Christ Himself, then by keeping Sunday holy, Christians are in fact making a profession of faith that Jesus Christ is Our Lord and God.

Appendix: A Review of the Baltimore Catechism on the Sabbath vs. Sunday

Q. 1136. How many kinds of laws had the Jews before the coming of Our Lord?

A. Before the coming of Our Lord the Jews had three kinds of laws:
1. Civil laws, regulating the affairs of their nation;
2. Ceremonial laws, governing their worship in the temple;
3. Moral laws, guiding their religious belief and actions.

Q. 1137. To which of these laws did the Ten Commandments belong?

Q. 1138. When did the civil and ceremonial laws of the Jews cease to exist?

Q. 1139. Why were not also the moral laws of the Jews abolished when the Christian religion was established?

A. The moral laws of the Jews could not be abolished by the establishment of the Christian religion because they regard truth and virtue and have been revealed by God, and whatever God has revealed as true must be always true, and whatever He has condemned as bad in itself must be always bad. …

Q. 1250. Why does the Church command us to keep the Sunday holy instead of the Sabbath?

A. The Church commands us to keep the Sunday holy instead of the Sabbath because on Sunday Christ rose from the dead, and on Sunday He sent the Holy Ghost upon the Apostles.

Q. 1251. Do we keep Sunday instead of Saturday holy for any other reason?

A. We keep Sunday instead of Saturday holy also to teach that the Old Law is not now binding upon us, but that we must keep the New Law, which takes its place.

[1] On this passage the Scripture commentary available on drbo.org plainly states: “He means with regard to the Jewish observations of the distinction of clean and unclean meats; and of their festivals, new moons, and sabbaths, as being no longer obligatory.”

[2] St. Justin was born in Judea as a pagan (c. 100 AD). He became a learned philosopher. Unsatisfied with the answers he found for man’s profound questions, his search for Truth (and God’s grace) led him to the Catholic Faith. He now ranks among the Church’s earliest apologists, is listed among the Fathers, and receives honor as a martyr. This quote comes from his “Chapter 67. Weekly Worship of Christians” in his great Apologia directed to the Roman Emperor himself. That chapter is quite instructive as it shows how the early Christians were already worshipping God through the Holy Sacrifice of the Mass.

[3] As just one example from the Church Fathers, we can look to St. Ambrose, one of the four great Western doctors of the Church. In his commentary on St. Luke’s fourth chapter, he writes:

“That the Lord began to heal on the Sabbath-day showeth in a figure how that the new creation beginneth where the old creation ended. It showeth, moreover, that the Son of God, Who is come not to destroy the law but to fulfill the law, is not under the law, but above the law. Neither was it by the law, but by the Word, that the world was created, as it is written: “By the Word of the Lord were the heavens made.” The law, then, is not destroyed, but fulfilled, in the Redemption of fallen man.”

You can read more of St. Ambrose’s commentary on this passage in Matins from Ember Saturday of Pentecost Week.

[4] Baptismal fonts are traditionally built in the shape of an octagon. This is to show that when one is baptized, one is coming to new life on the “Eighth Day” of Creation – that is, the holy Day of Resurrection.

[5] We are reminded of the Gospel incident when Jesus healed a man sick of the palsy (Lk 5:17-26). Pharisees and doctors of the law from every town had come to listen to Him and begun to think within themselves: “Who is this who speaketh blasphemies? Who can forgive sins, but God alone?” Christ proves to them that He is God because He does forgive sins and performs a miraculous healing. Just as God is the only one who can forgive sins (i.e., offenses against Him), so too, He is the only one who can adjust or abrogate His laws. Therefore, those who insist upon keeping Saturday holy instead of Sunday are, in this way, similar to the Pharisees of the Gospel: they are implicitly, though perhaps unintentionally, denying that Jesus Christ is, in fact, God. Similarly, they are denying the reality and life-giving power of the Resurrection which brings about the new Creation in grace on the Sunday, the “Eighth Day.”