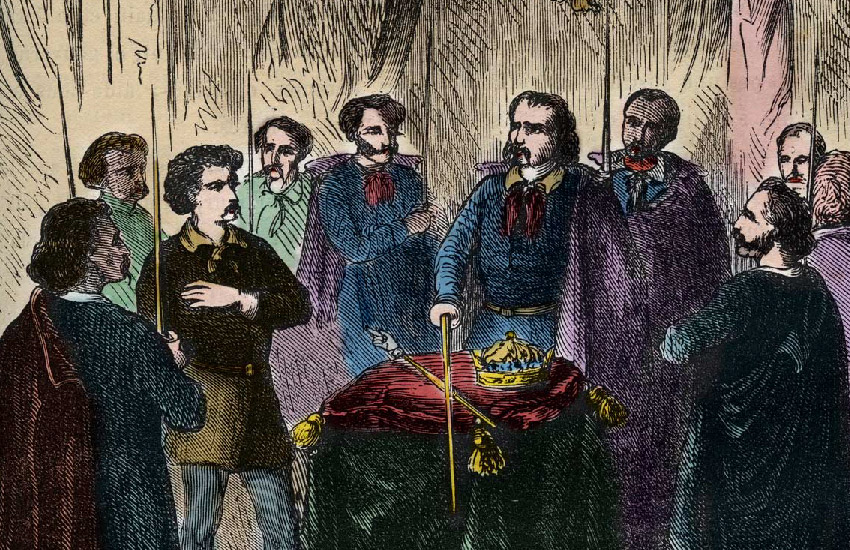 Dangers of the Illuminati: Revolution (Part 4)

It should be noted that revolution as such is not something that came into existence as a result of the Illuminati. That is to say, there has always been revolt in the activities of fallen man, and we might even say that the First Revolt was that of Lucifer when he bellowed his ‘non serviam’ (“I will not serve”) to God at the dawn of the ages. However, Illuminism — most notably, through Illuminized Freemasonry — has given our modern world a particularly striking form of revolution.

Revolution can come in a variety of forms and degrees. The term literally means something like ‘roll back’ or ‘turn away from.’ It is possible for revolutions to be big or small, grave or relatively benign. For example, you could have a national revolution against a certain order of governance, or you could have a regional revolution against a localized form of governance. A child could revolt against the wishes of his parents, and so on.

It is hard to make the claim that revolution as we understand it is justified, since it almost always entails a complete turning away from an inherited order. Furthermore, since a revolt entails the rejection of an established manner of operating, it is almost certain that the attempt to replace the former order will result in chaos that is worse than the former established order.

Some readers might be thinking that there is a justified form of revolution, since it is hypothetically possible to ‘turn away’ from an unjust power that harms a group of people. For a case like this, it would be more appropriate to use the term ‘resistance’ as the term ‘revolution’ is effectively synonymous with great upheavals in history that lead to untold suffering for masses of people. The scope of just and unjust resistance is beyond our aim for the moment, but suffice it to say that revolution as it is understood today is most certainly an evil thing, and not justifiable.

Revolution as an Intrinsic Element

Inherent in the mentality of the Illuminati is the very essence of revolution: a complete rejection of the inherited order of society and of revealed religion. This is clearly evident in the professed goals of Illuminism which say as much. The objectives of the Illuminati are in a way a distillation of the goals of the so-called Enlightenment, personified by the philosophy of Voltaire. This was in fact mentioned explicitly in the Permanent Instruction of the Alta Vendita — the Italian Freemasonic manifesto — but it is also mentioned in other places which are not secret at all.

In a book entitled Life of Voltaire, French author the Marquis de Condorcet relays the following when speaking of the French Revolution: “[Voltaire] did not see all that which he accomplished, but he did all that which we see. Enlightened observations prove to those who know how to reflect that the first author of that Great Revolution was without doubt Voltaire.”

A Difference Between the American and French Revolutions

This quote is a reflection on the legacy of Voltaire, which according to the author was made manifest in the French Revolution. It is an astute observation, and if you have ever read Voltaire — especially works such as Candide — it is clear that Voltaire held deep disdain for the Christian civilization of France. Thus, he mocked it mercilessly. However, as influential an intellectual as Voltaire may have been, he died in 1778, 11 years before the French Revolution. Although there is strong evidence that he himself was a Mason, due to the fact that Illuminati-inspired Masonry did not officially take root until 1782, there must have been some other organized force behind the French Revolution that incarnated the works of Voltaire.

Again, Freemasonry of the ‘old-school’ was that which inspired the American Revolution. This brand of error was not of the same ilk as that of the French Revolution. Masonry in the USA – which includes the likes of Franklin, Jefferson, and Madison – was historically antecedent to the illumination of continental European lodges. The most obvious proof of a significant difference between the two is that the French Revolution was far more blood-thirsty and anti-religious than its American cousin ‘across the pond.’ Why? On account of the influence of the Illuminati.

We can say with certainty that the Masons who had adopted Illuminism were directly involved in orchestrating the French Revolution. This is even admitted. In the circular of the Grand Council of the Masonic Order, which was sent to all the lodges to prepare for the centennial of the Revolution, it is stated, “Masonry which prepared the Revolution of 1789 has the duty to continue its work.”

So, there must have been a plan by the Illuminati and Masons to carry out this revolution — a revolution that has perpetuated throughout the world to this day. We will discuss the details of this in our next installment.