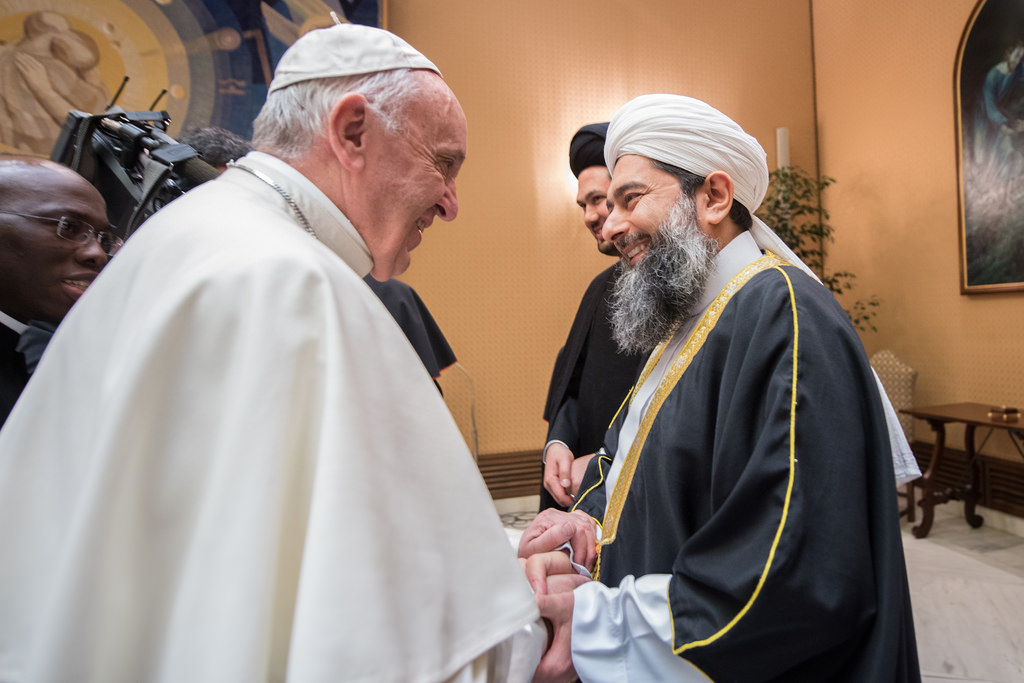 Every time a Muslim terrorist kills an “infidel” — a non-believer in Islam — the anti-Christian media of the Western world find some well-meaning apologist for the “religion of peace” to tell us that not all Muslims hate us, and most of them want to coexist peacefully with Christians and Jews.

Indeed, Pope Francis himself denied any link between Islam and terrorism. Speaking last March to the Organization of Islamic Co-operation (!), the Holy Father said he “appreciated” the OIC’s position on several matters, including terrorism, which the OIC is shocked, shocked that the world blames on fanatical Muslims.

The Pope and those who (mistakenly) think he is infallible at all times and in all matters trot out the ancient heresy that all the followers of the “religions of the Book” — Judaism, Christianity and Islam — “worship the same God”. We must therefore make allowances for slight differences of interpretation or emphasis. If the Qu’ran — the holy book of Islam — seems to say that devout Muslims should kill non-believers, we (the potential victims) must be misunderstanding what those words mean. 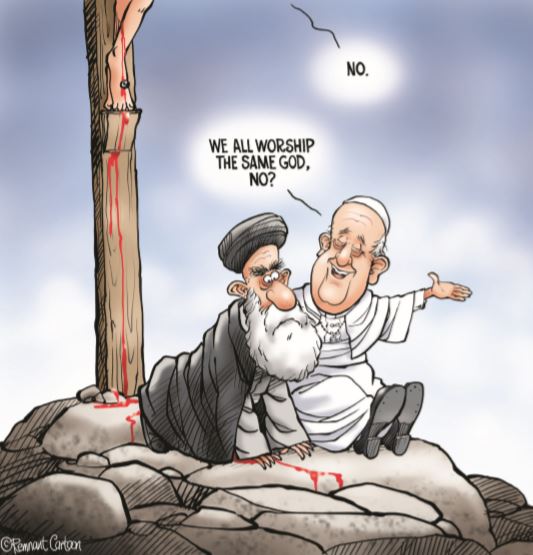 Well, sorry, Holy Father, but the notion that we all worship the same God is just plain wrong. From the Catechism of Pope St. Pius X:

To learn what Muslims really believe, read “The Great and Enduring Heresy of Mohammed”, by the greatly respected Anglo-French writer and historian Hilaire Belloc. M. Belloc saw the threat of Islamic terrorism as early as 1938 . Eight decades later, we see Catholics and others being persecuted for their faith all around the world.

The list of Christian martyrs grows longer every day. Just under two years ago, 85-year-old Father Jacques Hamel had his throat cut while saying Mass in the parish church of St-Étienne-du-Rouvray, France. His attackers? Two militant followers of “the religion of peace”.

A month later, Cardinal Raymond Burke spoke to the media about Hope for the World: To Unite All Things in Christ, a book-length interview in which the prelate ranged over a wide range of controversial topics including: contraception and abortion, gender ideology and “transgender rights”, the reception of Communion by divorced-and-remarried Catholics, and the crisis in the Roman Catholic Church today.

Cardinal Burke didn’t shy away from answering questions about whether Catholics and Muslims worship the same God, and whether Catholics are bound to believe the definition of Islam contained in Nostra Aetate, the Council’s declaration on the Catholic Church’s relationship with other religions.

Many Catholics view the contentious Vatican II document as unclear, or even at odds with the Church’s dogmatic teaching “Extra Ecclesiam nulla salus” — “Outside the Church there is no salvation.”

If we hold to that teaching, are we then to be considered dissenters from Nostra Aetate?  No, says Cardinal Burke, for Nostra Aetate “is not a dogmatic document.” The prelate said much of today’s response to Islam is influenced by a religious relativism, expressed in such everyday mantras as “We’re all worshiping the same God,” and “We all believe in love.”

But, the Cardinal asked, “If ‘God is love,’ how can He be the same God that commands of Muslims to slaughter infidels and to establish their rule by violence? I don’t believe it’s true that we’re all worshiping the same God,” he added. “To say that we all believe in love is simply not correct.”

On the point of following the hierarchs of the Church blindly, without thinking about what they are saying and teaching, Our Lord had some advice for us. He said, “Let them alone: they are blind, and leaders of the blind. And if the blind man lead the blind, both fall into the pit.” (Matthew 15:14)

Let us ask Our Lady of Fatima to help us discern the truth, to ask respectful questions about what we are being told, and to speak out respectfully but strongly when we are being led into error.