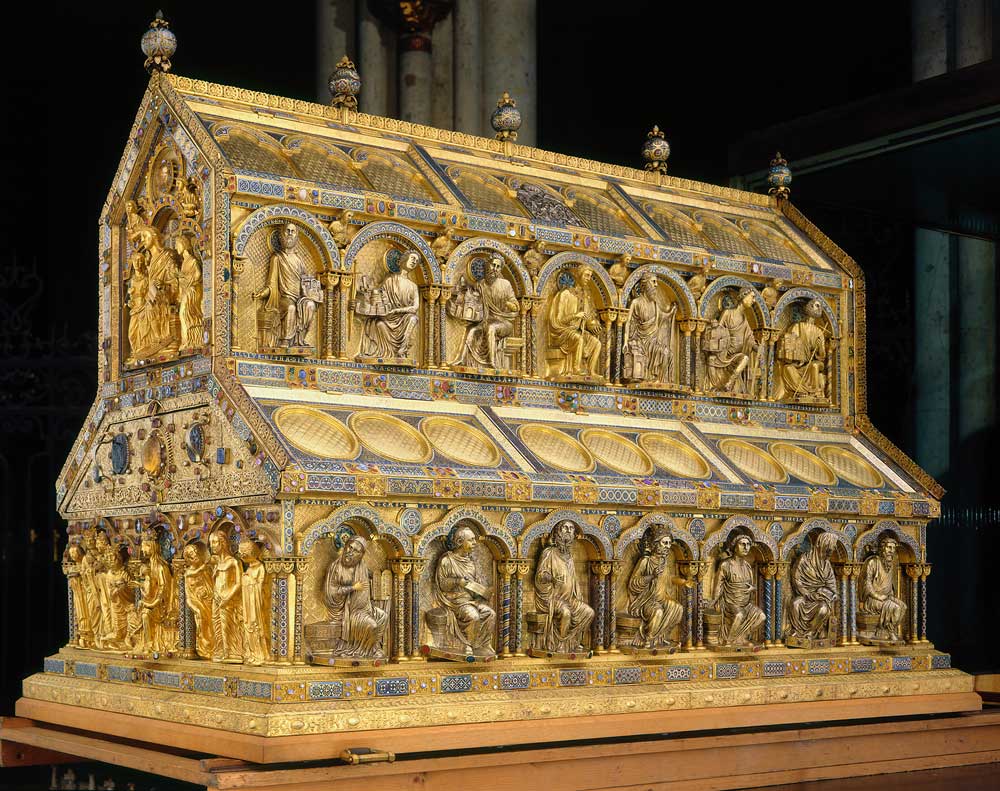 Yesterday’s article introduced the famous manuscript authored by John of Hildesheim which recorded the story of The Three Kings as it was well known throughout medieval Christendom. As we celebrate the great liturgical feast of Epiphany, it is fitting that we turn our attention to these three great saints and conclude their wondrous story.

Arrival at the Manger

The Star of Bethlehem shone brighter and brighter as the Kings mounted their horses and with servants bearing the treasures.  They brought the gifts to give recognition to the Christ child to all the world – which history has recorded for all peoples – to learn this great story and ponder in their hearts the many miracles that God manifested, to prove that this was His Son.

*    The Kings entered the little house with the great light of the Star, they fell down and worshiped the Christ child and offered to Him Gold, Frankincense, and Myrrh.

*     The rich gifts were gathered from treasurers also left in India , Chaldea, and Persia from Alexander the Great of Macedonia some 500 years before. In addition, treasures from the Queen of Saba were offered in King Solomon’s Temple.  This treasure was removed before the destruction of Jerusalem into her country by the people of Persia and Chaldea along with gold, silver, precious jewels, and stones.

*      Melchior, King of Nubia and Arabia presented an apple of gold, and 30 gilt pennies. The gold apple at one time belonged to Alexander the Great in which it was made of small pieces of gold, which had been gathered as tribute from all over the world. Balthasar, King of Saba gave what came first to his hand which was Frankincense. Gaspar, King of Tharsis who was the tallest of the three and of Ethiopian descent, presented Myrrh and offered this with his tears.

*   Gold – shows the power of a King – for it has to do with tribute; Incense – shows Divine majesty and pertains to sacrifice; Myrrh pertains to mortality and burial.

*    After leaving the little house with Our Lady and the Christ child, they returned to their caravans for food and rest. As was said earlier, they had neither eaten nor drunk in 13 days.  This was the case of all their servants as well.

*    An angel now appears in each King’s sleep that they should not return to Herod and to go another way home.

*    All 3 Kings left together with their respective caravans. All the food that was on the caravans miraculously stayed fresh for their return home.

*     The Three Kings were never to see the Star of Bethlehem again.

*     Even though they traveled in 13 days to Bethlehem by the Star leading them, the return trip took 2 years, which was the normal time required. This was God showing man the difference between His working and man’s working.

*      The Three Kings arrive at the Hill of Vaus in India. There they built a chapel to the Christ child. They made a covenant that each year they would return with all their lords and princes. Thus, they departed and returned to their own countries.

*     When they returned to their own people, they each preached and told to all what they had seen, heard, and done.

*     They made in all their temples a star after the same as it appeared to them going on their journey. Wherefore many pagans were converted and worshiped the Christ child.

*     The kings lived until after the Ascension of Christ and the coming of Saint Thomas to India to preach the Word of God.  Here St. Thomas learns of the Three Kings and the Star of Bethlehem. The Kings who were now quite aged had prayed that they would not die until they had received the Sacrament of Baptism, so that they could enter the Kingdom of Heaven.  When they learned of St. Thomas preaching the teachings of Christ, as well as the eye witness accounts of His life, crucifixion, resurrection, and ascension into Heaven.

*     After their baptism they were filled with the Holy Ghost and started to preach to all the people the Word of God.

*    Sometime later St. Thomas consecrated them as Archbishops so they could ordain other bishops, priests, and clerics to serve God.

*    St. Thomas also taught them the order and form of saying Holy Mass.

The Death of The Three Kings

*    The Three Kings lived together in the City of Survella near the Hill of Vaus. A short time before the Feast of the Nativity, a star similar to the Star of Bethlehem appeared above this city.

*    On the 8th day after the birth of Christ, King Melchior being 116 years old, and after saying Holy Mass yielded up his spirit and died.  The other two Kings prepared him for burial and placed Melchior in a tomb.

*    On the Feast of the Epiphany, Balthasar, King of Saba, said devoutly his Mass, and then died peacefully at the age of 112 years old. He was then laid to rest next to Melchior.

*     Lastly, King Gaspar died six days after King Balthasar. After saying Holy Mass, Our Blessed Lord took his spirit to dwell with Him in everlasting joy and this was in front of all the people. King Gaspar was 109 years old. He was then placed in the tomb with the two other Kings.

*      To the people they seemed not dead but only a sleep – where they remained incorrupt many years afterwards.

*     The Star did not leave this City until the remains of the Three Kings were moved.

*      Approximately 240 years later the mother of Emperor Constantine, Queen Helena made a pilgrimage to the Holy Land to locate and bring back to Rome all the relics of Our Lord’s life, His mother, and St. Joseph.  She was taken to the birth place of Christ  in the little house in Bethlehem. There lay undisturbed for all these years the baby Jesus’s swaddling clothes and a mantel and tunic of the Blessed Virgin. She also brought back to Rome the Cross that Our Lord died on. Before she left the area, Queen Helena [later canonized a Saint] started the building of churches on the spot of Our Lord’s birth, Calvary, Resurrection, and Ascension into Heaven, as well as other holy places related to the life of Jesus.

*     The only artifact she took was the cresh [manger] and brought that with her to Constantinople, Greece.

*      After this she then sailed for India as The Three Kings were greatly on her mind.  While securing the remains of The Three Kings she also preached the Gospel and re-converted many people back to the Christian Faith.

*      After the death of the Emperor Constantine and his mother Queen Helena, Greece was taken over by Muslims and the devotion to The Three Kings was forgotten.  The date was not given for these events but the remains of the Three Kings were taken to Milan, Italy due to new leadership in Greece. The remains were placed in a reverent church there.

*      The remains of The Three Kings were later removed and taken to Cologne, Germany and placed in the Cathedral of Cologne where they are located today – above the main altar in a gold chest. The Cathedral has a website and there are featured photos of the relics of The Three Kings. www.colognecathedral.net/cologne-cathedral-treasurey.html

*       The Kings are listed as Saints in the Roman Catholic Church and in the Greek Orthodox Church.

For 25 years I have wanted to make a pilgrimage to the Shrine of The Three Kings.  I still hope that one day that will be possible.

Wishing all a blessed Christmas Season and a blessed Feast Day of The Epiphany.

References: The Story of The Three Kings by John of Hildesheim, 1477 A.D., updated in 1997 by Neumann Press; the website of the Cologne Cathedral, www.colognecathedral.net/cologne-cathedral-treasurey.html

Mrs. Teresa Farris-Dacar has an M.A. in History, M.Ed. Clinical Counseling, M.Ed. Curriculum Design, B.A. Humanities, a major in Journalism, and has published the books listed below. They are available from the author by e-mailing her at ForGodandKing@att.net or placing a special order at Barnes & Noble or Books A Million. All books published by Ingram Publishing Company.

From England – To Barbados – To Carolina;1670-1700: The Founding of Charles Towne;
For God and King [a Christian historical novel];
Heaven Bound by Wearing The Brown Scapular of Our Lady of Mt. Carmel;

3 books translated from French into English for the first time: