The 25th chapter of St. Matthew’s Gospel contains a valuable lesson concerning Christ’s judgment upon the negligent when He returns. The famous Parable of the Talents speaks of the man who delivered to his three servants talents of money with the commission that they trade them and reap profits for him while he was away. The servants were given 5, 2, and 1 talents, respectively, the first two of whom traded and doubled their gains, while the third servant fearfully hid his talent in the earth without gaining anything for his lord.

The talents and their return signify the account we will have to make according to what we have received.  When it came time for the servants to reckon with their master, the first two presented their gains to him, for which they were rewarded with promotions. “But he that had received the one talent, came and said: Lord, I know that thou art a hard man; thou reapest where thou hast not sown, and gatherest where thou hast not strewed. And being afraid I went and hid thy talent in the earth: behold here thou hast that which is thine.” (Mt: 25: 24, 25)

“And his lord answering, said to him: Wicked and slothful servant, thou knewest that I reap where I sow not, and gather where I have not strewed: Thou oughtest therefore to have committed my money to the bankers, and at my coming I should have received my own with usury. Take ye away therefore the talent from him, and give it to him that hath ten talents…. And the unprofitable servant cast ye out into the exterior darkness. There shall be weeping and gnashing of teeth.” (Matthew 25: 26-30)

The lord in this parable represents Christ Himself. What He is saying is that when we have been given the ability (talent) to do good in the Kingdom through our endowments of grace, nature, or otherwise, and then we slothfully waste it away and don’t use it for our salvation and that of others, we will be accountable to Him.

This warning applies especially to the Catholic hierarchy. The bishops and priests have been given a tremendous talent, yea, push-button power to effectively steer the Church and the world onto a safer course, but instead they have used their talent to betray the Faith and pacify the Church’s enemies for worldly gain. The Son of Man is truly sold out again for 30 pieces of silver.

Before the 2008 and 2012 presidential elections the United States Catholic bishops (USCCB) most likely could have prevented Obama’s election by using their position (talent) to admonish the Catholic faithful in America not to vote for any pro-abortion candidates under the pain of mortal sin. They could have mandated that an admonition be read at all the Sunday Masses across America before the elections, but no, most timidly “buried their talent in the earth”* and said nothing for fear of offending murderers. Because of this negligence, reports were that over fifty percent of America’s Catholics voted for pro-abortion Obama in both elections, thus empowering him to advance his culture of death throughout the U.S. and beyond.

Worse yet, the bishops have not used their God-given talent to warn the faithful about anti-Christian causes such as Obamacare, Soros-funded open-border “immigration reform,” and the “LGBT” political agenda, and in fact several prelates including Cardinals Mahony and Cupich have actively abetted these causes. This is not to mention that our bishops have spent their days hacking away at tradition and implementing perfidious changes seemingly aimed at destroying the Church and uniting it with the world.

And now there is Cardinal Timothy Dolan of New York who has publicly refused to censure New York Governor Andrew Cuomo, who on January 22 signed into law the historic “Reproductive Health Act,” which guarantees women the “fundamental right” to have an abortion until the birth of the baby, for any reason, and with all criminal aspects eradicated from the books. 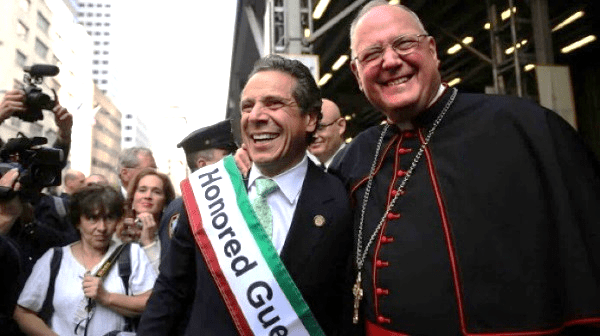 Let’s call this for what it is: legalized infanticide, a heinous abomination before God and men, which prompted concerned Catholics across America to demand that Cardinal Dolan excommunicate Governor Cuomo from the Catholic Church. And what did the cardinal do but take Cuomo’s side and issue a statement on January 25 in which he said that “excommunication should not be used as a weapon,” arguing that “those who call for someone’s excommunication do so out of anger or frustration.”

And so, while Cuomo’s murderous act clearly places him outside the Catholic Church, Dolan’s act has sent the signal across America that Cuomo is accepted as a living member of the Church. Dolan who could have used his talent to censure abortion has used it instead to dignify an abortion advocate. “Woe to the world because of scandals!” (Mt 18:7)

Fatima Ignored by the Hierarchy

Looking at this a little deeper, the culture of death has its roots in Communism, which explains why abortion is so rampant in America—the agents of Communism are now entrenched in our government. Our Lady at Fatima asked that the pope and bishops join on one day to consecrate Russia to Her Immaculate Heart in order to avert this spread of Communism. She warned that if Her requests were not heeded the errors of Russia would spread throughout the world and even into the Church.

Unfortunately, Our Lady’s requests were not heeded and thus, Russia did not convert, and as such, the deceptive influence of Communism is alive and at work today in the Church and throughout the world. The dark cloud of Socialism continues to lower upon the West and has now brought us to an unprecedented red eclipse that portends to the gruesome events foretold in the Fatima message.

The Consecration of Russia would bring Our Lady’s crushing heel upon the Marxist red dragon and reverse everything that Communism is generating, i.e. the culture of death, terrorism, the desecration of the Mass and Eucharist, etc., but unfortunately, the bishops are too busy pacifying the Communists, with much help from Pope Francis who has repeatedly used his talent to say that “it is the communists who think like Christians.”

Worse yet, Francis, through a “provisional agreement” on September 22, gave non-ordained Communist “bishops” of the Chinese Catholic Patriotic Association official jurisdiction over the underground Church in China. The bishops of the CCPA are Communist agents, men of the state, who were “consecrated” by the Chinese Party-State and who deceptively wear the bishops’ miter to strengthen their mission to oppress the underground Church in China.

Cardinal Joseph Zen of Hong Kong, a fierce critic of the deal with Communist Beijing, said, “They’re giving the flock into the mouths of wolves,” adding that “The consequences will be tragic and long lasting, not only for the church in China but for the whole Church because it damages the credibility.” (LifeSiteNews, September 22, 2018)

And now there is the latest controversy concerning Pope Francis, who, during an interreligious meeting with Ahmad el-Tayeb, Grand Imam of Egypt’s al-Azhar Mosque, in Abu Dhabi on February 4, signed the joint statement “Document on Human Fraternity for World Peace and Living Together,” wherein it states that “The pluralism and the diversity of religions, colour, sex, race and language are willed by God in His wisdom, through which He created human beings.”

Has Francis used his talent to profess heresy? To say that God willed diversity of religions—if he means it in the ordained sense—is to say that God engendered these religions, which is heresy. And since the pope obviously means that diversity of “colour, sex, race and language are willed by God” in the ordained sense (which they are), we can only assume he means “diversity of religions” the same way. Every indication is that Francis is advocating post-Vatican II ecumenism.

Shouldn’t the pope be using his position to extend the invitation to all peoples to convert to the Catholic Church?

The hierarchy will have to stand before Christ and account for its negligence and abuse of power. The pope and bishops need to repent of their collusion and repatriate themselves to Christ, or else we will soon see the fulfillment of Our Lady’s prophecy that “Various nations will be annihilated.” Let the bishops consider the following scriptural warning to all princes and religious leaders, lest they too be cast “into the exterior darkness.”

“For power is given you by the Lord, and strength by the Most High, who will examine your works, and search out your thoughts: Because being ministers of his kingdom, you have not judged rightly, nor kept the law of justice, nor walked according to the will of God. Horribly and speedily will he appear to you: for a most severe judgment shall be for them that bear rule.” (Wisdom 6:4-6)

*According to the late Bible scholar Fr. George Leo Haydock (1774-1849), placing talents in the earth “represents all those who, having received any good quality, whether mental or corporal, employ it only on earthly things.”