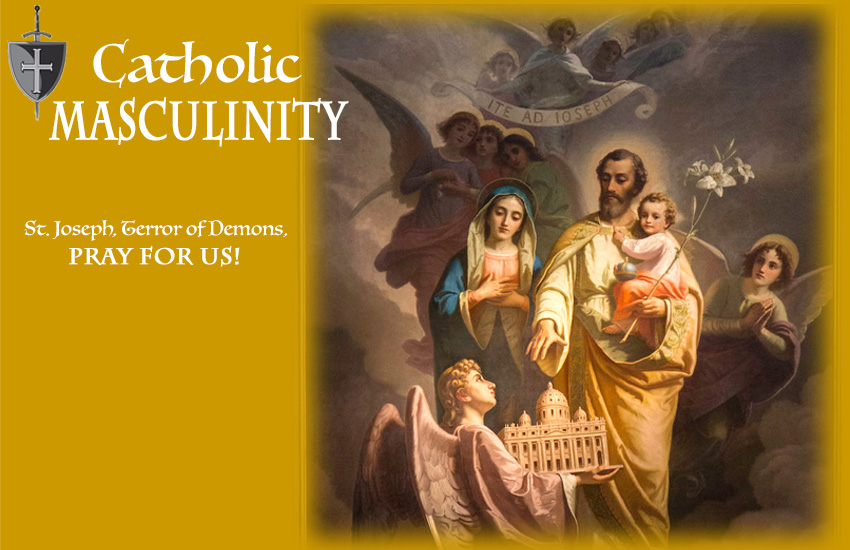 Our Church, and as a result, our society is suffering from a plague of effeminacy. The word “effeminate” does not mean “feminine,” but is a word finding its root in the Greek word for “softness.” To say a man is effeminate is to say that a man is “soft,” or cowardly. The Latin “vir” is the word for man, and is also the word for hero, husband, and person of courage, honor, and nobility. The word “virtus” is the Latin word from whence we derive the word “virtue.” Virtus is also used for excellence, bravery, courage, power, worth, manliness, and character.

When Adam calls Eve “Virago,” it is not only a title of honor given to his wife, but also a prefigurement of the Virgin Mary, who is the fulfillment of what it means to be a true Heroic Maiden. It is interesting that in the first Chapter of Genesis, the word “hominem” is used by God to classify the creation of man. Hominem is the general word used most often for “mankind,” and is used rather than the word “vir,” which pertains specifically to men. If you search the entire Latin Vulgate, you will not find the word “vir” used for men, and you will only find the word “virago” used once. This surely has various implications, but one thing is sure: it is presupposed that man is to be a “vir.” Since the word virago means “acting in a manly way,” it is reasonable to assume that the nature of vir is already known. Implicit in man’s design by God is to be virtuous, manly, heroic, courageous, excellent and strong. Man is the model for woman, and she finds her strength and resolve in his virtue. On average, men today act nothing like the vir they were made to be.[1]

Contained in this reality is the Biblical wisdom of the headship of man in his home, and the submission of woman to her husband. Once again, our world may reject this as it has been infected by the festering disease of feminism, but it is nonetheless the right order by which God Himself ordained things. The root meaning of the word “submit” is to be “under the mission of” someone. Adam was created as the Vir to lead the Virago on a heroic mission of virtue and excellence, and Eve was created with the privilege of assisting in this endeavor. We all know this story. Almost immediately after the creation, Adam failed in his duty while allowing Eve to dialogue with the devil. The rest as they say “is history.” God’s proper order was not rectified until the New Eve said “yes,” and the New Adam exhibited the commensurate self-sacrifice necessary to undo the Fall.

I am sure that many have contemplated Jesus’s role as the New Adam, the Crucified Vir. In addition, Mary is rightly called and venerated as the New Eve. She perfectly fulfills the title of Virago and also Mother of the Living, as through Her we access Her Son, Who gives eternal life. There is however a third key person who helps undo the snare of the Ancient Serpent. This man deserves greater devotion and contemplation: his name is Joseph.

Jesus and Mary sanctify and correct the errors of Adam and Eve in obvious ways: Jesus atones for the Original Sin, and Mary is the prophesied Woman who crushes the Serpent. However, an aspect of Adam and Eve’s primordial relationship that cannot be overlooked is their spousal union. Mary is espoused to the Holy Ghost in a mystical sense and Christ is espoused in an analogous way to His Bride, who is the Church. But, God also ordained the earthly marriage of Mary and Joseph to show us a perfect model of what Adam and Eve failed to fulfill in their time.

Mary and Joseph’s marriage was not symbolic or for external pretense. It is a teaching of the Faith that their marriage was a true marriage. Moreover, it was not only theological or mystical, but also lived in space and time. It is an incarnational way for the bond of husband and wife to be made holy once again. Where Adam and Eve fail in fidelity to God’s commands, Joseph and Mary thrive in prayerful obedience. Where Adam and Eve give in to the appetites of the flesh[2] and partake in the forbidden fruit, Joseph and Mary live in perfect continence, demonstrating the perfect chastity based in an unyielding love of God.

Jesus is the New Adam, and Mary is the New Eve, but after them Glorious Saint Joseph is rightly given “Protodulia”, meaning that among the saints he is given first place.[3] Put simply, in a similar way to Mary being ‘The Woman,’ Joseph is ‘The Man.’

Throughout this upcoming series of articles on Catholic Masculinity, we will meditate on the titles given to St. Joseph in the litany dedicated to him. If you are a man reading this, then seek to conform yourself to him. If you are a woman, then encourage these things out of the men in your life, for one often rises to meet expectations. And please, pass this on to the men you know.

Saint Joseph, Terror of Demons, pray for us!

(Read the next article in this series,  Part 2 – St. Joseph, Lover of Poverty)

[1] We will expand on the issues in the articles to come. But, men on average greatly struggle with all types of virtue. One need only think of the plague of pornography as a prime example.

[2] It is a common interpretation amongst Church Fathers that Eve committed a sin of lust by giving in to a physical appetite that was mortally sinful. Of course, Adam partook in this sin as well.

[3] Latria is the proper theological term in Latin for the worship which is uniquely reserved for God. Dulia, on the other hand, is the term for the veneration which is due to the saints. It is helpful to use these Latin terms because in English both latria and dulia can be translated by the same word of ‘worship,’ especially in many older Catholic prayers and literary works. Hyperdulia, or the greatest of duliae, is then the proper term for the unique veneration we give Our Blessed Mother; and protodulia, or the first of the duliae after hyperdulia, is the singular veneration we render unto St. Joseph.