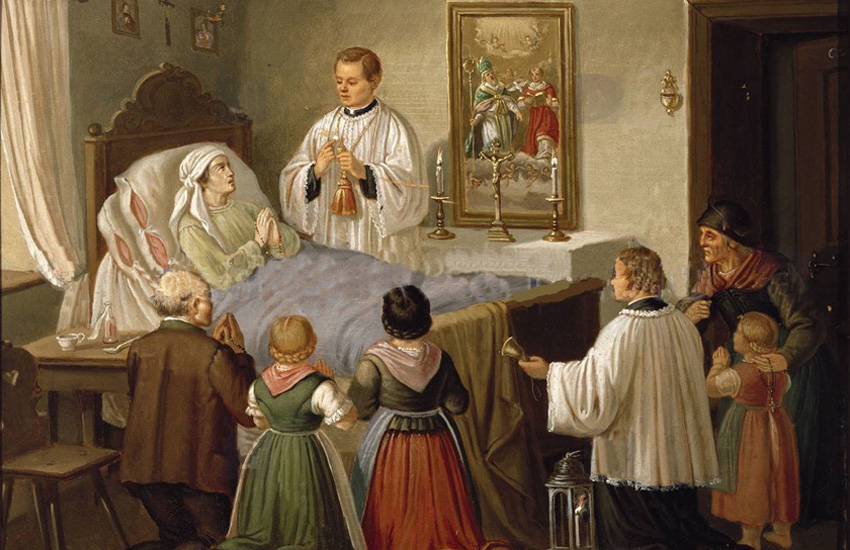 A Proper Understanding of Extreme Unction

This Sacrament, most often the very last Sacrament a person receives before death, is intended to bring spiritual and sometimes physical help to a dying person. Yet, it is very often misunderstood. Extreme Unction, also called Last Rites,[1] is a Sacrament which was instituted by Christ Himself and which confers actual graces.[2] It is not a mere blessing as some have come to erroneously believe. It is as real a Sacrament as Baptism, Confession, or the Holy Eucharist.

We Catholics affirm that Jesus Christ founded the Catholic Church to be the only vehicle to maintain His presence on earth following His death, resurrection and ascension into Heaven. We also affirm that the Scriptures and the Tradition of Christ’s One, Holy, Catholic, and Apostolic Church clearly demonstrate that there are seven Sacraments which are outward signs instituted by Christ to give grace.[3]

Grace is God’s life lived in, through, and by human beings, and the unique graces given by each individual Sacrament are compatible with, and correspond to, each phase of or event in the human life cycle.

How is Extreme Unction performed? While the priest anoints the eyes, ears, nostrils, tongue, hands and feet[4] of the sick person, he says the prayers prescribed in the Roman Ritual.

For reception of the Sacrament, a person must be a baptized Catholic who has reached the age of reason and is in danger of death from infirmity or old age.[5] Care should be given to ensure that everyone who receives the Sacrament of Extreme Unction has the proper dispositions. Close relatives and the priest should also do their best to help the infirm receive the Sacrament as worthily as possible.[6]

Catholics are anointed with oil in Baptism, Confirmation, Holy Orders (if ordained) and lastly with the Oil of the Sick through the Sacrament of Extreme Unction, named properly since “extreme” means “last” and “unction” refers to the physical action of the anointing with oil. And while it may be repeated to a person suffering from a serious illness every month to six weeks, it may also be given again to a sick person who recovers and suffers a relapse. Despite this, “Extreme Unction” remains the proper name of the Sacrament.

As explicitly stated in the Baltimore Catechism, “Extreme Unction may be given to all Christians dangerously ill, who have ever been capable of committing sin after baptism and who have the right dispositions for the Sacrament. Hence it is never given to children who have not reached the use of reason, nor to persons who have always been insane.” (Q. 959) With the requirement of having the proper dispositions, including a resignation to the will of God in regards to recovery, being in the state of grace (with having contrition for sins which are at a minimum), and a general desire to receive the Sacrament, the Sacrament of Extreme Unction is never given to heretics “because they cannot be supposed to have the intention necessary for receiving it, nor the desire to make use of the Sacrament of Penance in putting themselves in a state of grace.” (Q. 960) For that reason, Protestants may not receive the Sacrament.

The effects of the Sacrament are also clear (Q. 969): “1st. To comfort us in the pains of sickness and to strengthen us against temptations; 2nd. To remit venial sins and to cleanse our soul from the remains of sin; 3rd. To restore us to health, when God sees fit.”

The rubrics also implicitly reveal that the Sacrament may only be given to the living, not to those who already have passed on to Judgment.

Funerals have in recent decades turned almost into celebrations when they should instead be times of great mourning and prayer for the soul of the deceased — we do not know if a person is in Heaven unless they are a validly canonized saint. For this reason, pray for the salvation of the dying and the souls of the deceased — do not assume that they are in Heaven (unless they are a baptized young child who died before attaining the age of reason). To assume that the deceased is in Heaven and not pray for their soul is a serious neglect, one which most likely results in your loved one suffering in Purgatory longer than they might have with the help of your prayers and by indulgences you could merit on their behalf.

And for those of us who continue to fight the good fight as members of the Church Militant on earth, let us make it clear to our family that we wish to receive the traditional form of Extreme Unction should we fall into sudden illness or injury. By reading the Rite of Extreme Unction,[7] we should be inspired to have our own eventual death before our eyes.

And when we die, as we know each of us must, will we be in God’s sanctifying grace or be lost for all eternity?

[1] In general, “Last Rites” would include Confession, Viaticum (Holy Communion), Extreme Unction, and the Apostolic Blessing. In the post-Vatican II era, this Sacrament is commonly referred to as “Anointing of the Sick” and the change in name indicates a profound change in practice. In the vast majority of cases, this ‘anointing’ is now administered without prior sacramental confession, without Viaticum, and without the Apostolic Blessing.

[3] “If any one saith, that the sacraments of the New Law were not all instituted by Jesus Christ, our Lord; or, that they are more, or less, than seven, to wit, Baptism, Confirmation, the Eucharist, Penance, Extreme Unction, Order, and Matrimony; or even that any one of these seven is not truly and properly a sacrament; let him be anathema.” (Council of Trent, On the Sacraments in General, Canon I)

[4] How profound and solicitous for salvation that Holy Mother Church calls for all of man’s senses which can lead him to sin to be strengthened by the sacred oil, perfumed by an odor of sanctity, and shielded with the holy Sign of the Cross. Sadly, this anointing of all the senses has been omitted in the revised new order rite called ‘Anointing of the Sick.’

[5] This condition of “in danger of death” was explicitly stated prior to the liturgical revolution of the 1960s and 1970s which has altered all of the Sacraments. The New Code of Canon Law now simply states the word “danger” which is sadly quite ambiguous. Naturally, those who wish to practice their Faith as all our ancestors did understand this to mean “danger of death” because they use the Church’s tradition to guide their interpretation. On the other hand, this one word, “danger,” is so open-ended that those who wish to change the hallowed practice of the Church interpret it to mean whatever may suit their purpose. This has led to many terrible abuses, even sacrileges, because people are now receiving “anointing of the sick” for any illness or simple ailment, for ‘general healing,’ and even in ‘communal celebrations.’ Yet none of these innovations are of apostolic practice nor are they found within our tradition.

[6] The Catechism of the Council of Trent explains that factors which affect a worthy reception of this sacrament include sorrow for past sins, piety, faith, trust in God, loving God’s divine will, and resigned abandonment to His holy will.