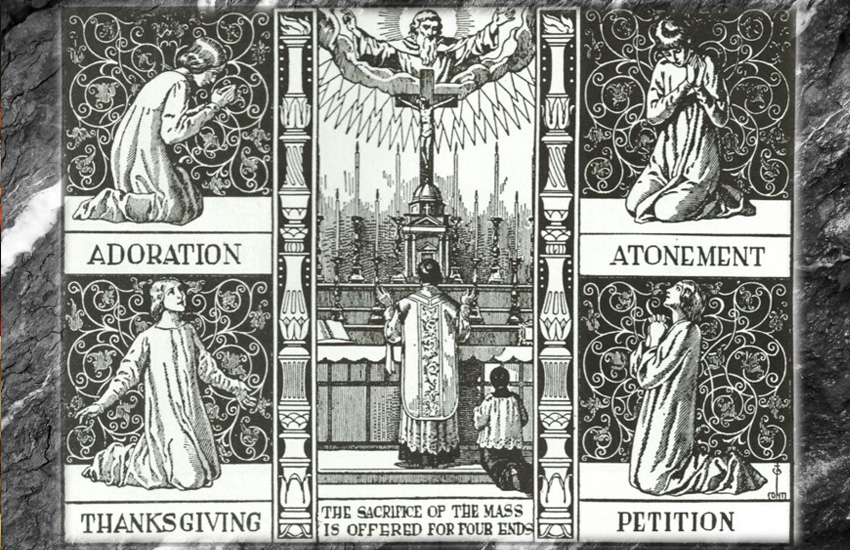 What Is the Mass?

First and foremost, the Mass is a true and proper Sacrifice offered to God.[1] Holy Mass is the re-presentation of the Sacrifice of Jesus Christ on the Cross.[2]  It is a sacrifice that is always efficacious for us as it does not depend on the merits of the priest or of the congregation. In the Mass, Our Lord is both Priest and Victim. He is present on the altar of Sacrifice as Victim, while the priest acts in persona Christi (in the person of Christ) in offering up to the Eternal Father the unblemished Sacrifice during the Canon of the Mass.

Although innumerable graces and blessings can be obtained from attending Mass, we can further receive grace by partaking of the Holy Eucharist, if we are Catholics in the state of grace, though our doing so is not the purpose of the Mass or the reason why we must assist at Mass on Days of Precept.

In the Old Testament, priests would frequently offer animal sacrifices to God in atonement for the sins of the people as was prescribed by the Law of Moses. However, as children of the New Testament, we offer to God the only true Sacrifice – Jesus Christ – which is offered in the Mass by priests of the New Testament. Jesus is the Lamb of God because He was the sacrifice that paid the price for all our sins.

Four Required Components of the Mass:

As the Council of Trent has affirmed, the Mass is the “true and proper sacrifice.” As with any sacrifice, there are four necessary components: a sacrificial gift (res oblata), a sacrificing minister (minister legitimus), a sacrificial action (actio sacrificica), and a sacrificial end or object (finis sacrificii).

First, the res oblata, or sacrificial gift, must be physical and real. In common parlance we refer to it as the victim. In the Old Testament, this often consisted of animals offered up to God. Today at the Mass, Christ the Son offers Himself as the Victim to the Father. This is the same sacrifice (Victim) as on Calvary.[3]

Second, only a qualified person can offer the sacrifice, and that is a priest. In the Old Testament, priests were to come only from the Tribe of Levi, and the High Priest came from the House of Aaron. Under the New Covenant established in Christ’s Blood, the priest must be a man ordained by a bishop of the Catholic Church. The priest not only offers the Sacrifice of Jesus truly present, but he acts in the person of Christ (in persona Christi) so that it is truly Christ Who offers the Sacrifice acting in and through the priest. This is true as long as the priest, doing what the Church requires,[4] does not willfully (intentionally) oppose Christ acting though Him. Thus, when the priest says the words of Consecration, it is both the priest speaking and also Jesus – God Himself! – speaking through the priest.

Third, the sacrificial action of the Old Testament was the spilling of the blood of animals. In the New Testament, it is Jesus’ voluntary surrender of His Blood and the offering of His life.

Finally, the object of Sacrifice is to be offered solely to God for His honor and glory. Such an offering is lifted into the realms of the Divine.

What Is the Purpose of Attending Holy Mass?

Our purpose of attending the Holy Sacrifice of the Mass is to be present at the Sacrifice of Christ that is made present again through the priesthood of Jesus Christ.  We worship God at Mass. The Church identifies four primary purposes, or ends, of Holy Mass. They are:

Keep all of these in mind the next time you are present at the Holy Sacrifice. Are you offering and uniting your prayers with the priest for the purposes of adoration, atonement, petition, and thanksgiving?

The New Testament Fulfills the Old

Just as Melchizedek brought forth bread and wine (“bringing forth bread and wine, for he was a priest of the Most High God…”), Jesus instituted the Eucharist as a Sacrifice at the Last Supper. Thus, we again see the importance of the continuity of the Old and New Testaments. Jesus did not come to destroy the Old Covenant but, instead, to fulfill it (cf. Matthew 5:17) and establish a new and greater one with His Body as the true and lasting Sacrifice.

In addition, the tearing of the temple veil was the final sign of completion of the Sacrifice of Jesus on the Cross (cf. Matthew 27:51). The veil in Old Testament times was made of thick linen and was used to separate the Holy of Holies from the rest of the temple. The Holy of Holies was so sacred that only the high priest was permitted to enter that part of the temple one day out of the year – on Yom Kippur.[5] He would even have a rope with bells tied around his ankle. This was because if the priest died within the Holy of Holies, on account of offending God by liturgical impropriety, he could still be pulled out using the rope. If the bells were silent for an abnormal length of time, those outside would know the high priest had died. They could then use the rope to pull the corpse out, as none wanted to enter, knowing that too would be a liturgical violation justly deserving death.

The tearing of the veil (Matthew 27:51) signified the ending of the Old Covenant,[6] the completion of the redemptive work of Christ and the start of a new perpetually offered Sacrifice. Now mankind could enter into God’s presence and offer to God their sufferings and prayers – as long as they were united spiritually with the Cross. The Protestant notion that the tearing of the temple veil signified the end of all sacrifices is false. The Old Testament sacrifices had ended; but as the early Church shows, the Sacrifice of the Mass was celebrated by the Apostles themselves as the New Sacrifice.[7]

The time has come when the words of Malachi 1:11 have been fulfilled: “For from the rising of the sun even to the going down, my name is great among the Gentiles, and in every place there is sacrifice, and there is offered to my name a clean oblation: for my name is great among the Gentiles, saith the Lord of hosts.” That offering is none other than the Holy Sacrifice of the Mass.

[1] See Canon 1 from Session XXII of the Council of Trent.

[2] The first chapter of Session XXII of the Council of Trent explains how the Mass is a representation of Christ’s one same sacrifice. Chapter 2 further elaborates by stating: “…in this divine sacrifice which is celebrated in the Mass, that same Christ is contained and immolated in an unbloody manner, who once offered Himself in a bloody manner on the altar of the cross… For the victim is one and the same, the same now offering by the ministry of priests, who then offered Himself on the cross, the manner alone of offering being different.”

[3] The baptized faithful, as members of the Mystical Body of Christ, are called to spiritually unite themselves to this one, same Sacrifice at Holy Mass. This is one of the aspects that is completely unique to the Christian sacrifice, and differentiates it from all the pagan sacrifices of antiquity.

[4] In sacramental theology, this is referred to as using proper form and matter. Form refers to the words spoken by the priest and matter refers to the physical substance (such as bread and wine). Only the Church has the authority to determine the proper matter and form for each sacrament.

[5] Yom Kippur was considered the holiest day of the year. It was dedicated to repentance and atonement. It was on this day that sacrifices were offered specifically for the forgiveness of sins.

[6] The blood of animals is never sufficient to atone for sin, as St. Paul explains in his Letter to the Hebrews. On account of justice, it should be the blood of the one who committed the sin. However, in His great mercy, God allowed the blood of animals to serve in a vicarious manner throughout the Old Covenant. Once Christ came, He took on to Himself the sin of Adam, and the sin of all men. He freely suffered the punishment for all sins by offering His own Blood. The blood of animals is now useless in atoning for sin and the Catholic Church rightly forbids all ritualistic animal sacrifice.