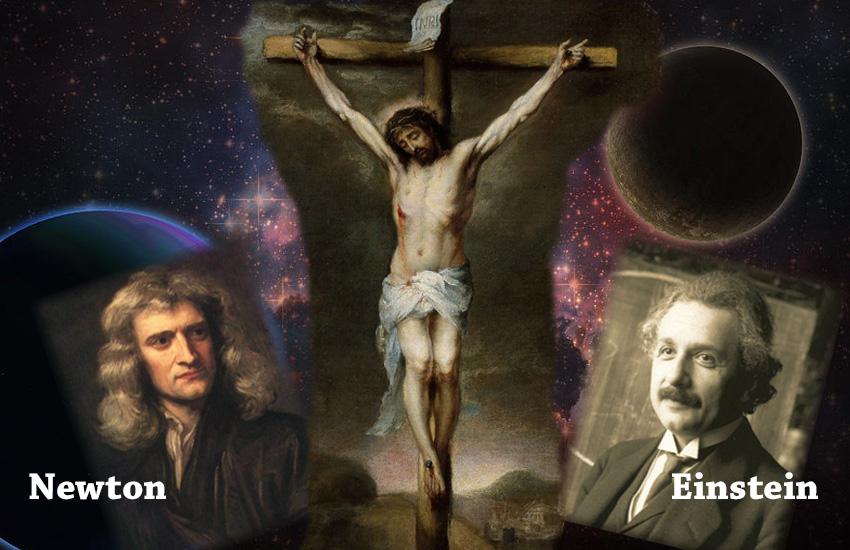 Editor’s Note: All Catholics should be aware of the Church’s clear teaching that “Even though faith is above reason, there can never be any real disagreement between faith and reason, since it is the same God who reveals the mysteries and infuses faith, and who has endowed the human mind with the light of reason.”[1] This article is not addressing the error held by many that ‘the discipline of science is opposed to religion,’ but rather of how individual scientists view the relationship between science and religion, and the importance of Christians providing convincing witness, in their daily lives, to the existence of God.

“Jesus is too colossal for the pen of phrasemongers, however artful. No man can dispose of Christianity with a bon mot! No one can read the Gospels without feeling the actual presence of Jesus. His personality pulsates in every word. No myth is filled with such life” (Albert Einstein, 1929).

Early British Renaissance philosopher, theologian and scientist, Sir Isaac Newton (1642-1727) was an undisputed genius and innovator. Legend would have it that Newton’s interest in gravity spawned as he watched apples falling from a tree under which he rested – most likely untrue.

Recognized as one of the most influential scientists of all time, Newton solidified the five-step scientific method still used in all valid scientific investigation today. He was arguably[2] the first to develop the mathematical field of calculus. He developed an integrated theory of gravity, accurately describing the movement of many celestial bodies, even though ‘gravity’ itself remains a mysterious concept which modern scientists are unable to fully explain. Newton invented the first working reflecting telescope, taking the science of astronomy forward by a quantum leap.

Newton was devoutly religious. He thought theology was very important across all disciplines of thought. In his system of physics, God was essential to the nature and absoluteness of space. In his famous work, Principia, he stated, “The most beautiful system of the sun, planets and comets, could only proceed from the counsel and dominion of an intelligent and powerful Being.”[3] Newton, an Anglican, strayed far from Catholic and even Protestant Christian dogma as he studied theology, but never questioned the existence of a personal God.

One of the greatest physicists in modern history, Albert Einstein (1879 – 1955) was born and raised in a German Jewish family in the German sub-state of Königreich Württemberg. Einstein received three years of his primary education in a Roman Catholic school where he learned Catholic dogma. He learned the tenants of Judaism from members of his Jewish family, but probably not from his father or mother, who were atheists.

Albert Einstein became a naturalized citizen of the United States in 1940, having been visiting when Adolf Hitler came to power in 1933. Being Jewish, he did not go back to Germany, where he had been a professor at the Berlin Academy of Sciences. In the United States, Einstein was affiliated with the Institute for Advanced Study in Princeton, New Jersey, until his death in 1955.

Mention Einstein and the first thing that usually comes to mind is e=mc2, his famous theory of relativity, for which he was awarded the Nobel Prize.

In a 1929 magazine interview, Einstein was asked what he thought of Christianity.

Q: To what extent are you influenced by Christianity?

A: As a child, I received instruction both in the Bible and in the Talmud. I am a Jew, but I am enthralled by the luminous figure of [Jesus] the Nazarene.

Q: You accept the historical existence of Jesus?

A: Unquestionably! No one can read the Gospels without feeling the actual presence of Jesus. His personality pulsates in every word. No myth is filled with such life.[4]

In other documents, Einstein is quoted as saying “Science without religion is lame, religion without science is blind.”[5] And in a private letter, “My position concerning God is that of an agnostic. I am convinced that a vivid consciousness of the primary importance of moral principles for the betterment and ennoblement of life does not need the idea of a law-giver, especially a law-giver who works on the basis of reward and punishment.”[6]

We can conclude, then, that Einstein was neither Christian nor Jew as a religion. He was probably best described as a deist[7] or at least an agnostic. So, what was the reason Einstein rejected the existence of a personal God? Einstein recognized the remarkable design and order of the cosmos but could not reconcile those characteristics with the evil and suffering he found in human existence, especially in light of the Holocaust. How could an all-powerful God allow such extreme suffering?

The myth that most scientists don’t believe in God or who see study of religion as a meaningless pursuit is just that – a myth! In fact, contrary to the claims of the modern atheists, most scientists do not necessarily see religion and science as always being in conflict. Rice University sociologist Elaine Howard Ecklund and her coauthors surveyed the responses of scientists at twenty-one elite U.S. universities, finding that only fifteen percent thought that science and religion were always in conflict. About half expressed some form of religious affiliation.[8]

Holiness of Life Is Required for All Believers

As faithful Catholics, we must be uncompromising in doctrine but unblemished in our conduct and in our acts of charity to God and to neighbor. Let us never grow despondent, cynical, or uncharitable for a moment in our interactions with others. God does not require us to be successful but only faithful. We must strive to save our own souls first, as the Scriptures state in referring to removing the plank from our own eyes before we can do so with others. And we can do so by being firmly grounded in Catholic doctrine, availing ourselves of the Sacraments, staying close to Tradition, and having a deeply engrained prayer life.

Yet, through this all, we must never be a cause for scandal. Souls will only after great labor be converted by our work with apologetics. But souls will in only a few moments be lost if they see us living out a life that is not unblemished and in perfect conformity to the Faith we profess. While many of the leading scientists in our era are not opposed to the philosophical arguments for the existence of God, they struggle with reconciling that truth with how many of us live our lives.

Keep this in mind in all of your actions – no matter how small in public – souls can be lost by scandal. And the greatest service we can do is to live a truly Catholic life, being faithful to Catholic tradition, honoring the Message of Fatima, and being Christ-like at all times.

[2] There exists to this day argument as to who actually was the first to discover or at least to explain calculus. Many believe that German born Gottfried Leibniz (July 1, 1646 – November 14, 1716) was the first. The reason for the argument lies in the fact that Leibniz published a treatise explaining “the calculus” before Newton did.