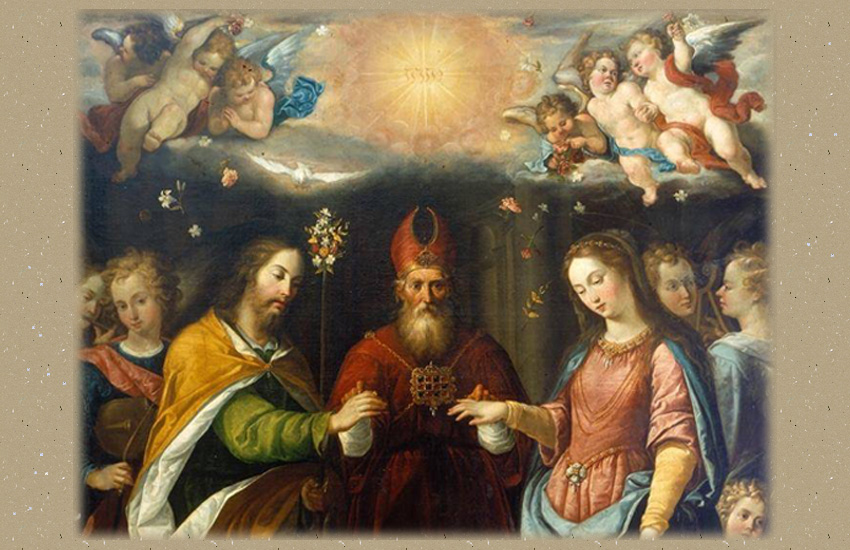 Marriage, one of the seven sacraments of the Catholic Church, is a sacrament at the service of community. Marriage was instituted by God in the Garden of Eden and Our Lord Jesus Christ raised marriage to the dignity of a sacrament, meaning that it gives sanctifying and actual graces. The Sacrament of Matrimony symbolizes and makes present God’s love through the life-long, faithful and fecund love of a man and woman. The spousal relationship of a wife and husband is expressed by mutual help, friendship, sacrificial (self-giving) love, sexual intimacy and the proper hierarchy and roles established by God for a family. Marriage can only be between a man and a woman.

Marriage was given by God to man and woman as a gift to be a public testament of their love. It is permanent (until the death of one of the spouses), monogamous, and unconditional. It requires a total gift of self by each spouse to the other. God protects this sacrament with His grace, allowing the couple to grow in their union with each other. The couple is to be open to God’s love by being open to the gift of children. The relationship of the man and woman parallels that of Christ and His Church.

Succinctly put, marriage is a contract, by which a man and a woman establish between themselves a partnership for the whole of life and it is by its nature ordered toward the procreation and education of offspring. The primary end (purpose) for which marriage exists is to raise children – who will populate Heaven.

Those who are looking for a traditional explanation of the Sacrament of Matrimony, with an emphasis on the Roman Catechism and the Baltimore Catechism, should sign up for the self-study Marriage Preparation Course offered by CatechismClass.com.[1]

Divorce Does Not Exist for a Catholic

The Roman Catechism, after explaining the purpose of marriage, turns to the advantages of the indissolubility of marriage:

“If marriage could be dissolved by divorce, married persons would hardly ever be without causes of disunion, which would be daily supplied by the old enemy of peace and purity; while, on the contrary, now that the faithful must remember that even though separated as to bed and board, they remain none the less bound by the bond of marriage with no hope of marrying another, they are by this very fact rendered less prone to strife and discord. And even if it sometimes happens that husband and wife become separated, and are unable to bear the want of their partnership any longer, they are easily reconciled by friends and return to their common life.”

Marriage is a permanent institution that ends only with the death of one of the spouses. A spouse cannot divorce another since they made a vow to live together until death. Our Divine Lord emphasized the impossibility of divorce:

“For this cause a man shall leave his father and mother; and shall cleave to his wife. And they two shall be in one flesh. Therefore now they are not two, but one flesh. What therefore God hath joined together, let not man put asunder. (…) And he saith to them: Whosoever shall put away his wife and marry another, committeth adultery against her.  And if the wife shall put away her husband, and be married to another, she committeth adultery.” (Mark 10:6–9, 11–12)

Christ’s words are clear. Those who leave their spouses, even though the government accepts their divorce, are still married. By civilly remarrying, they live in a state of adultery. Since adultery is a mortal sin, those in this state may not approach to receive the Blessed Sacrament, truly Our Lord Jesus Christ Himself, unless they go to sacramental Confession and amend their lives. To receive Holy Communion in the state of such a sin is a sacrilege. There is no exception for those who are civilly “re-married”.

Father Francois Knittel, in an explanation on the impossibility of Holy Communion for those who are divorced and civilly remarried, explains:

“Remarried divorcees are therefore living in a state opposite to that willed by Christ and explained by St. Paul. This permanent and public state of grave sin makes them unworthy to receive Communion and incapable of receiving its fruits ([Summa Theologica of St. Thomas Aquinas], III, q. 80, a. 4). If this state is known, the priest is bound to refuse them Communion publicly (III, q. 80, a. 6). If they succeed in receiving Communion nonetheless, they commit a mortal sin of sacrilege (III, q. 80, a. 4).”[2]

In similar words, the wisdom of the Baltimore Catechism explains that divorce has no affect in the slightest on the indissolubility of the Sacrament of Matrimony:

“Divorce granted by courts of justice or by any human power does not break the bond of marriage, and one who makes use of such a divorce to marry again while the former husband or wife lives commits a sacrilege and lives in the sin of adultery. A civil divorce may give a sufficient reason for the persons to live apart and it may determine their rights with regard to support, the control of the children and other temporal things, but it has no effect whatever upon the bond and spiritual nature of the Sacrament. (Q. 1024)”

Those who are divorced and civilly remarried are in an objective state of mortal sin and as a result cannot approach the altar. They must rectify their condition lest their souls be lost and condemned to Hell. Only Catholics in the state of grace may receive Holy Communion. Those who are civilly divorced but not remarried may still receive Holy Communion as long as they live a chaste life, since in God’s eyes they are still married to their spouse who they are civilly divorced from.

Also note, this does not prohibit from receiving Holy Communion those who are “re-married” if they have a valid annulment. An annulment is a declaration that they were never actually married to begin with; therefore, they are truly marrying for the first time. Even though secular society may view them as ‘divorced and remarried,’ they were never married before, after all, in God’s eyes.

We have it as our duty to pray for those living in the state of adultery. Let us pray for strength for them to leave their difficult situation and return to the state of grace for “neither fornicators, nor idolaters, nor adulterers… shall possess the kingdom of God.” (I Cor. 6:9)