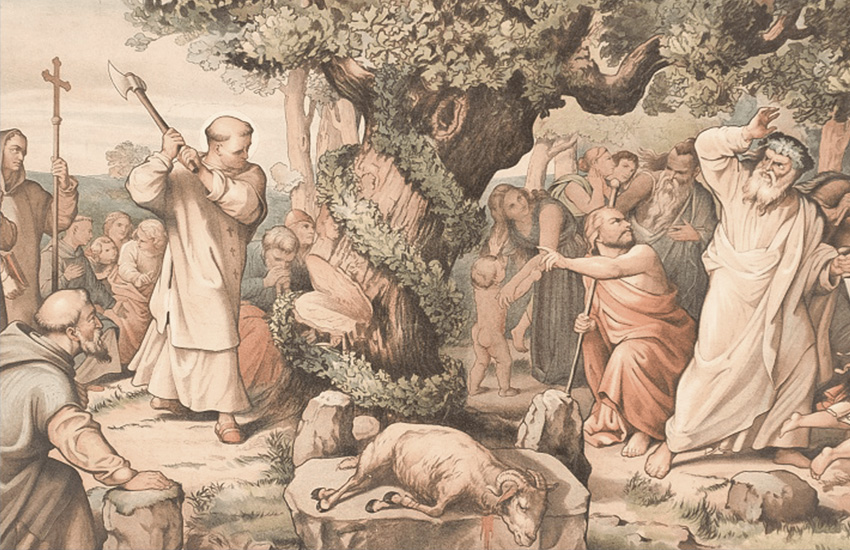 The Worst of Mortal Sins – Idolatry

All sins are not equal. We know from our catechism lessons that mortal sin is worse than venial sins since through one mortal sin we lose God’s grace in our souls. This is not the case with venial sins. To die without God’s grace (i.e. to die with mortal sin on the soul) would condemn a soul to Hell. Such a matter is basic Catholic knowledge.[1]

Yet, not all mortal sins are equal even though all of them lead to eternal death, unless one obtains absolution. For one thing, the circumstances of an action can change the severity of a mortal sin including its effects (e.g. automatic excommunication or not). Take for instance murder. Whereas murdering another human being is always a mortal sin,[2] inflicting physical harm on a Pope, including death, would also lead to a latae sententiae excommunication. Likewise, those who procure an abortion (i.e. the murder of an unborn child) incur a similar excommunication. Also, in ancient rankings on various kinds of murder three of the most heinous were fratricide (the killing of one’s own family), regicide (the killing of one’s king), and ultimately deicide (the killing of God).

Secondly, there is a general ranking of mortal sins as some, by their very nature, are worse than others.[3] For instance, the four sins which cry out to Heaven for vengeance,[4] the seven deadly sins,[5] and the sins that blaspheme the Holy Ghost[6] are especially heinous. However, the worst mortal sin is not on any of these lists. As stated by the Catholic Encyclopedia, the worst mortal sin – worse than murdering children or pillaging villages or torturing the innocent – is idolatry. The Catholic Encyclopedia states:

“Considered in itself, idolatry is the greatest of mortal sins. For it is, by definition, an inroad on God’s sovereignty over the world, an attempt on His Divine majesty, a rebellious setting up of a creature on the throne that belongs to Him alone. Even the simulation of idolatry, in order to escape death during persecution, is a mortal sin, because of the pernicious falsehood it involves and the scandal it causes.”[7]

Note that even the simulation of idolatry – that is, pretending to offer incense or worship to idols, even though in one’s heart one does not believe it – is still a serious mortal sin. In the Second Book of Maccabees, Chapter 6, the elderly scribe Eleazar was beaten to death for refusing to eat pork. When he was given the option to pretend to eat the pork but in fact eat a hidden piece of permitted meat on the dish, he refused saying that to do so would cause grave scandal to the young who would see him apparently eat the pork. And for this, he was martyred. While pork is no longer prohibited, by virtue of the New Testament which perfected the Old Testament and removed the old prohibition on unclean foods, the story illustrates the seriousness of simulating sins.

In a like manner, if our lives were on the line and we were threatened with torture and death if we did not drop a single grain of incense in a bowl to honor a pagan deity, we should pray for the grace to resist and endure martyrdom. Idolatry is the gravest of sins and even pretending to perform it to save our own bodies would be among the worst of sins.

Our world is seeing the return of paganism in Rome, even by Catholic clergymen who consent to the idolatry and the false worship of non-existent gods.[8] We are seeing a growing trend in the West to calumniate Christopher Columbus and Catholic missionaries and to honor the Native American’s pagan religions, which often involved human sacrifice. We must pray to stop this. Idolatry is the worst of all mortal sins. Idols must be chopped down and destroyed as St. Boniface, St. Martin of Tours, and others did centuries ago. And we must be informed on the truths of the Catholic Faith in order to defend it against the increasingly demonic trend of idolatry growing in our world.

Prayer for the Conversion of Pagans:

O God, the everlasting Creator of all things, remember that the souls of unbelievers were made by Thee and formed in Thine own Image and Likeness. Remember that Jesus, Thy Son, endured a most bitter Death for their eternal salvation. Permit not, we beseech Thee, O Lord, that Thy Son should be any longer despised by unbelievers, but do Thou graciously accept the prayers of Thy faithful children, and of Thy One, True Church, the Immaculate Spouse of Thy most holy Son, and be mindful of Thy mercy. Grant that the infidels may renounce their pernicious idolatry and wicked unbelief, that they too may someday know Him Whom Thou hast sent, even the Lord Jesus Christ, Who is our Salvation, our Life, and Resurrection, by Whom we have been redeemed, to Whom be glory for endless ages. Amen. (500 days indulgence)[9]

[1] The Baltimore Catechism, once widely used by all Catholics in the United States, succinctly explains:

[2] Note: The definition of murder excludes capital punishment as well as killing in a “just war”.

[3] Traditional Catholic teaching has always held that grave violations of the first three Commandments are always worse than grave violations of Commandments 4-10, because these are direct offenses against God Himself, whereas the latter seven commandments deal with offenses against man. Sadly, most Catholics think murder, adultery, stealing and lying are worse sins than intentionally missing Mass on Sunday or blaspheming God; but, in this they are mistaken. For example, Our Lady of La Salette (1846) specifically mentioned that the sins which were calling down God’s wrath most fiercely at that time were violations of the Second and Third Commandments.

[8] We do well to recall Sacred Scripture’s teaching, echoed in the psalms and by St. Paul, that all the gods of the pagans are in truth demons. This is why the devil desires idolatry so intensely, for the worship due to God alone is instead given to him!