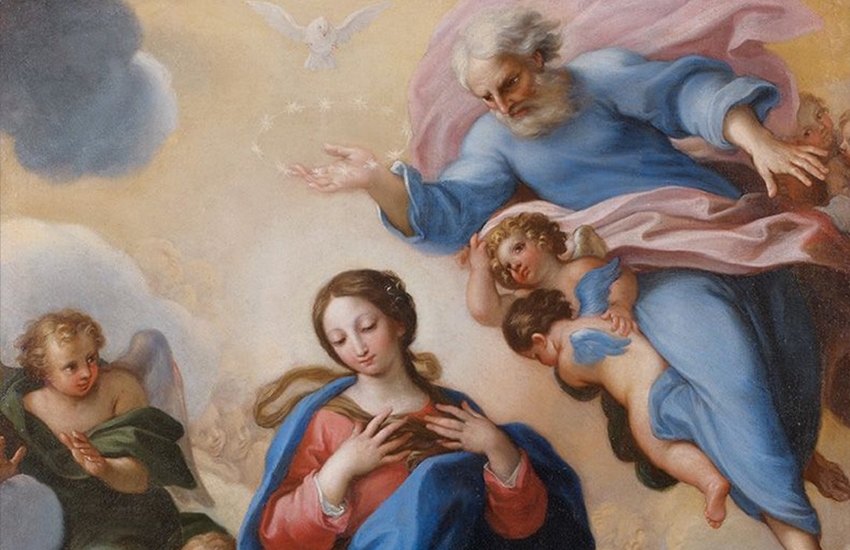 The Perpetual Virginity of Mary Is Required Dogma

The Roman Catechism states, “[T]he faithful are bound to believe that Jesus the Lord was not only conceived by the power of the Holy Ghost but was also born of the Virgin Mary.” Elsewhere, referring to the birth of the Second Person of the Blessed Trinity, the Catechism explains this sublime mystery on the Virgin birth:

“… as the rays of the sun penetrate, without breaking or injuring, in the least, the substance of glass; after a like, but more incomprehensible manner, did Jesus Christ come forth from His mother’s womb without injury to Her maternal virginity, which, immaculate and perpetual, forms the just theme of our eulogy.”

In early December 2006 the American film “The Nativity Story” was shown in theaters, and it was rightfully boycotted by some Catholics – despite having its premiere in Vatican City – since it depicted Mary, the New Eve, in child-birthing pains, which is heretical to claim. Likewise, some Protestants and non-believers alike, by twisting the words of the Gospel of Mark 6:3 and the Gospel of Matthew 13:55–56, attempt to claim that the Virgin Mary had other children with either St. Joseph or other husbands. They fail to understand that, as Rev. George Leo Haydock explains in his illustrious Bible commentary published in 1859, “These were the children of Mary, the wife of Cleophas, sister of our blessed Lady and therefore, according to the usual style of the Scripture, they were called brethren, that is, near relations to our Savior.”

These verses do not in any way refer to blood-brothers and sisters of our Divine Lord who would have been in the womb of the Blessed Virgin Mary. Even in modern colloquial terms, people often use the term “brothers” or “sisters” to refer to groups of close friends, members of the same neighborhood, or among those who share a common ethnicity or religion.

The central mystery of the Catholic Faith – namely, the Incarnation of Jesus Christ to a Virgin – is beyond our understanding. Yet, rather than twisting the Scriptures and Church history to fit new, heretical views, we pray that we can slowly come to better understand this marvelous mystery on how God Himself took human flesh and was born of only one biological parent. This mystery harkens back to the beginning of Creation with Adam and Eve, and regarding Christ and Our Lady the Catechism rightfully calls them the Second Adam and the Second Eve:

Reparation for Blasphemies against Our Lady’s Perpetual Virginity

Lucia dos Santos, one of the three children who witnessed the apparitions of Our Lady in Fatima in 1917, later witnessed – on December 10, 1925, as a postulant of the Dorothean Sisters at their convent in Pontevedra, Spain – the appearance of Our Lady, who came to reveal part of God’s plan for the salvation of sinners in our time: the reparatory Communion of the Five First Saturdays.[1]

A few months later, on June 12, 1930, Sister Lucia responded by letter to a request from her confessor for more information on the reason for the five Saturdays as requested by Our Lady. Her confessor had asked: “Why five Saturdays, and not nine, or seven, in honor of the sorrows of Our Lady?” She explained that on the night of May 29, 1930, while in the chapel of the Dorothean convent in Tuy, Spain, Our Lord Himself revealed to her that the five Saturdays correspond to the five kinds of blasphemies uttered against His Mother,[2] one of which being blasphemies against Her Perpetual Virginity. Not only would we do well by learning and sharing this truth of Our Lady’s virginity, but we should also make reparation for those who blaspheme Her and who attribute child-birthing pains to the Blessed Mother.

The Blessed Virgin Mary is Ever-Virgin. She likewise did not suffer child-birthing pains. And those who contradict either of these statements succumb to heresy and have separated themselves from the Church. They must repudiate their errors and return to Holy Mother Church through the Sacrament of Confession.

Editor’s Note: For those who are interested in further study regarding the infallible dogma of Mary’s Perpetual Virginity – before, during and after the Birth of Christ – we recommend a course available at the St. Vincent Ferrer Foundation. The course, consisting of five 80-minute talks on CD or MP3, was given by Mr. David Rodriguez. It explains this dogma through Scripture, Tradition, Magisterium, the teaching of the Saints, theology and right reason. It further explains how this dogma is exceedingly relevant for the life of the Church and the individual Christian, and why it is so virulently attacked today. It can be requested by contacting info@svfonline.org. The notes (in .pdf format) from this course are available HERE.