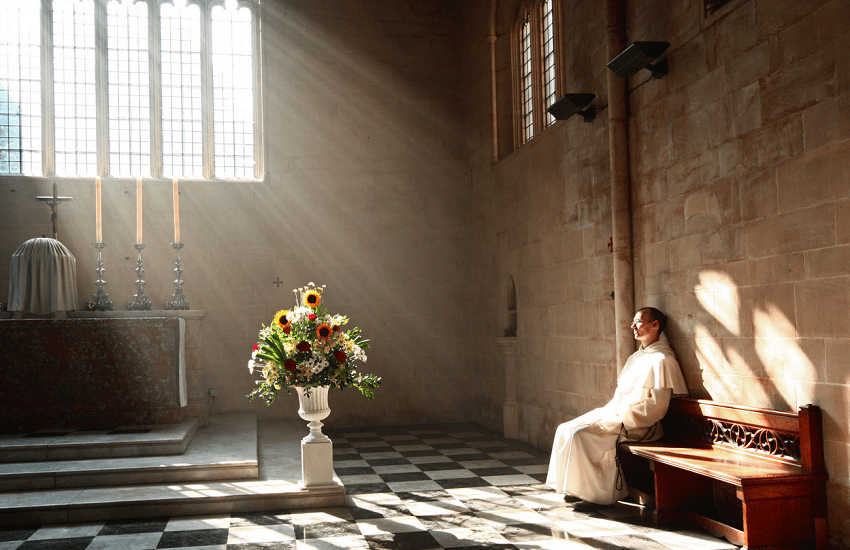 A Catholic Understanding of Authentic Leisure

The Modern World Has Lost the True Concept of Leisure

[Editor’s Note: This article has a philosophical bent and so requires some thoughtful and attentive reading to be properly understood. We invite you to “Join the Conversation” in the “comments” section beneath the article.]

In his book, Leisure, the Basis of Culture, the German Catholic philosopher Josef Pieper (+1997) makes the claim that the reconstruction of Western Culture demands a rebirth of the notion of leisure. Leisure is distinct from the state of inactivity, or acedia, because it is based in festival and an affirmation of the world for what the world truly is (i.e. a creation). This takes place most distinctively in the festival, which is founded on the concept of worship, which is recognition that man is dependent on God. What then does it mean to be at leisure, and what is the “act” that is most appropriate to leisure? Contemplation.

In the period of reconstruction after the end of the Second World War, the acclaimed goal was a restoration of Western Civilization. Pieper makes the startling assertion that to truly rebuild the western culture one must rebuild it on the foundation of leisure. This seems almost absurd in a world where the very concept of leisure has been destroyed by our utilitarian oriented society. It would almost seem that we live to work rather than working to live. In part, our very notion of leisure has been replaced by the notion of a break from the working world.

A Catholic Understanding of Leisure Using the Philosophy of Josef Pieper

The Greek writer Aristotle clearly understood that the entire focus of man’s existence was leisure. It is he who explains that man accepts being in a state of “not-at-leisure” in order to be “at-leisure”. That is, the purpose for which man works is that he might be “at-leisure.” This appears so contrary to our very notion of daily living and the rest-from-work that we are tempted to wonder whether or not this is merely something that an ancient writer stated but which has no relevance in modern times. Pieper says that this doubt points to misunderstanding the very notion of leisure.

If one is tempted to dismiss the saying of Aristotle that we are “not-at-leisure” in order to be “at-leisure”, they might be shocked to find that the notion of the vita contemplativa in Christian doctrine correlates to the Aristotelian notion of leisure. Indeed our understanding of the human person as such has been altered to such a degree that to get a glimpse of what Aristotle meant by leisure and the values that antiquity and the Middle Ages placed on such a state, we must attempt to penetrate the notions of “work” and “worker” that have become so prevalent in our modern world.

The modern world has lost much of what is contained in the notion of leisure. It is strictly opposed to what the ancients called acedia. The worker type, who finds his very meaning in the usefulness he serves to society, can only identify leisure with a sense of idleness and inactivity or “rest-from-work,” which we commonly refer to as “relaxation.” Acedia is precisely this lack of doing, but the notion goes deeper still. Acedia is fundamentally a despair of never accomplishing that which one is meant to be. It is a giving up in the effort to be who-one-is. This attitude may be found lurking behind even the most physically satisfying exertions.

In order to understand leisure, Pieper then seeks what is diametrically opposed to acedia. The modern man would have us believe that it is the industriousness of the worker contributing to the good of the society. But if acedia is fundamentally a denial of man’s existence as man, then its opposite must be a fundamental affirmation of who man is. Pieper turns to St. Thomas Aquinas for the startling statement that acedia, so often understood as the man who fails to do any work, is not a resting per se, but is a very sin against the command of rest. Acedia then is a restlessness that is opposed to the very spirit of leisure. Acedia, after all, is one of the seven deadly sins.

After this contrast, Pieper attempts to provide a concept of leisure to the reader. Leisure then, in the first place, is a stillness of spirit, an opening of the mind to receive. Secondly, it is opposed to the idea of work as effort, for it takes place in a sense of celebration, of approval of the world created by God. The highest expression of this celebration is the festival. And truly no festival is greater and of more importance than the Sunday celebration of the Holy Sacrifice of the Mass. Thirdly, leisure must be understood as opposed to the concept of break-from-work. A break is meant to afford man the ability to continue working. The break is fundamentally for the sake of work. Leisure, though truly refreshing, derives this freshness from the very fact that it is for its own sake. It is only accidental that man is better able to work after being at-leisure. Leisure is not about making the worker a better functionary, but about making him more human. In participating in leisure, something of the human is left behind and a spark of the divine is achieved.

For Pieper, the heart of leisure lies in an affirmation of the world. There is no more solid affirmation of the meaning of the world to be found than that present in festival and this affirmation is the praise of God, the Creator. The festival derives its entire meaning from the aspect of worship present in it. Thus, leisure too is based primarily in worship. There have undoubtedly been attempts to divorce celebration from its divine origins, but they are, as of the present, all empty of real meaning, except insofar as they steal from some authentic religious activity.

It is in the spirit of festivity that the great gulf between work and leisure is seen. Work is always about production and the advancement of society marked by compensation. Festivity on the other hand is marked by sacrifice, where one gives not just from surplus, but even where there is a lack. This is fundamentally opposed to the notion of useful endeavors.

The question of what one is to do is then posed, and Pieper replies more along the lines of what not to do than what to do. Leisure certainly then, with its greatest expression in worshipful celebration, arises naturally in a Catholic culture, but Pieper warns that trying to reestablish leisure as a method for restoring culture, is to defeat the very purpose of leisure. Leisure must truly be for its own sake. It can never be a means to an end, and thus it can never be done for the sake of restoring culture.

We as Catholics must ask ourselves – what are we doing to help reclaim leisure in the form of true rest and worship on Sundays and Holy Days in our society? For those looking to understand the Catholic principles of Josef Pieper, CatechismClass.com has summarized his work and makes it available as an 8-page summary.[i]