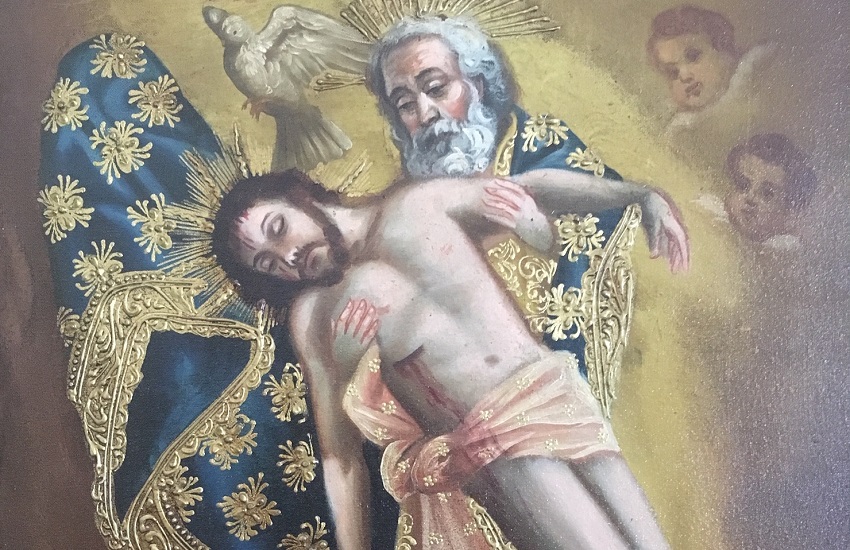 Patripassianism: The Heresy of the Father’s Suffering

Throughout history, various movements and sects have arisen with views opposed to this universally required belief.  Whereas some sects claim that Jesus Christ was not God (e.g. Arians) and while others claim that He also didn’t actually die (e.g. Muslims), some have gone to the opposite extreme to state that not only Jesus Christ but God the Father and the God the Holy Ghost also died on the Cross.  Such a view is also heretical.

The only Divine Person to have suffered on the Cross was Jesus Christ, Who despite His complete divine nature also possessed a complete human nature, and through His human nature, our Redeemer suffered torments.  And while we may truly say that God died on the Cross, in so doing we are asserting that the Second Person of the Trinity expired – not that either of the other two Divine Persons died on the Cross.  After all, God the Father and God the Holy Ghost did not take on human nature and are entirely immaterial.  They could not have been fastened to a Cross, nor could they ever suffer corporeally, since They do not possess a material body.

In considering the Scriptures, the words of St. Paul in 2 Corinthians 5:19-21 condemn this heresy: “For God indeed was in Christ, reconciling the world to himself, not imputing to them their sins; and he hath placed in us the word of reconciliation. For Christ therefore we are ambassadors, God as it were exhorting by us. For Christ, we beseech you, be reconciled to God. Him, who knew no sin, he hath made sin for us, that we might be made the justice of God in him.” And likewise, while He was dying on the Cross, Jesus Christ prayed to the Father (cf. Luke 23:34). If Patripassianism were true, then Jesus would have been talking to Himself. He clearly was not.

Patripassianism is a version of the Seballianism heresy which claimed that each of the Divine Persons (the Father, the Son, and the Holy Ghost) were three different aspects (called modes) of the one God, rather than three distinct Persons.  Many of the heresies we continue to see espoused in heretical sects, even in our world today, fail to adequately teach what the Church has long ago decreed as infallible and settled on the Trinity. These sects fail to understand – or refuse to accept – the long-established teachings on the Trinity. We would do well to fully study the teachings of the Church in these matters as expounded in the Councils of Nicaea, Constantinople, Ephesus, and Chalcedon.

Those Catholics who wish to refresh themselves on the infallible teachings of the Church should consult the list of the 255 infallible dogmas of the Faith put together by the late Fr. Peter Carota.[i]