Why the Church Must Be a Visible Entity on Earth

Over one hundred years before Martin Luther, the errors of John Wyclif (+1384) and Jan Huss (+1415) were already leading souls to hell in Catholic Europe. Like those who came after them, heretics of the 14th and 15th centuries attacked the visibility of the Catholic Church, claiming that Christ did not establish a visible Church on earth but a mere spiritual church. This error still exists today by those who refuse to acknowledge [1] the Seven Sacraments, [2] authentic Catholic dogma, and [3] the rightly exercised authority of the legitimate ecclesial hierarchy. It is seen chiefly in the heretical “Christian” (i.e., Protestant) denominations separated from the Catholic Church.

Dr. Ludwig Ott, in Fundamentals of Catholic Dogma, teaches on this point by referencing Sacred Scripture:

“Pius XII, in the Encyclical Mystici Corporis, confirmed the teaching of Leo XIII, and expressly rejected the view that the Church is ‘a mere spiritual entity, joining together by an invisible link a number of communities of Christians, in spite of their difference in Faith.’ The visibility of the Church was denied by the Spiritualistic Sects of the Middle Ages, by Huss and the Reformers. According to Huss, the Church consists of the communion of the predestinated. Calvin held the same view. Luther taught that the Church is ‘the assembly of the saints (the faithful), in which the Gospel is properly taught and the Sacraments are properly administered.’

“But without an authoritative teaching office there is no certain norm for the purity of doctrine or for the administration of the Sacraments. The rejection of the hierarchy inevitably led to the doctrine of the invisible Church. The biblical proof of the visibility of the Church springs from the Divine institution of the hierarchy. The teaching office demands from its incumbents the duty of obedience to the faith (Romans 1:5) and the confession of faith (Matthew 10:32; Romans 10:10). To the sacerdotal office corresponds, on the part of the faithful, the duty of using the means of grace dispensed by it (John 3:5; 6:54). To the pastoral office corresponds, on the part of those shepherded, the duty of being subject to the Church Authority (Matthew 18:17; Luke 10:16)”

“To what does Christ compare the Church? To a city on the top of a mountain, visible to all the eyes in the world. What do you conclude from these words (Matthew 28:17:) ‘If he will not hear them, tell the Church?’ That the Church must have been always visible, otherwise there must have been a time during which this command of Christ was impossible on account of the invisibility of the Church; for no one could lay his complaint before an invisible Church. Hence the Catholic is the true Church, since she is the only Church that has been always visible.”

Dr. Ott further states in support of this reality the witness of the early Church Fathers:

“St. Irenaeus holds against the Gnostics that the adherents of the Church throughout the whole world confess the same faith, observe the [same] commandments and preserve the same form of Church constitution. He compares the Church, which preaches the same truth everywhere, to a seven-branched candlestick, which, visible to all, bears the light of Christ (Adv. haer. V 20, i). St. Augustine compares the Church to a city on a mountain (Matthew 5:14): “The Church stands clear and visible before all men; for she is the city on the mountain which cannot be hidden.”

“From [the] commission of Christ it is evident that His followers form an organized society under the leadership and guidance of the Apostles and their successors, with the right to teach and to command on one side, and the duty to be taught and to obey on the other…[i]

“Thus it is clear that the Church founded by Christ is a visible Church, not a purely spiritual association. The Church of Christ is a public society consisting of rulers and subjects. This society had to be public and visible in order that those desirous of salvation might be able to find it and join it. Evidently Christ did not intend His Church to be a secret organization, must less a purely interior profession of faith in His doctrines. Everything is visible about His great institution: Baptism, which is necessary for membership, the other Sacraments which He commanded His followers to receive, the rulers and lawgivers whom the faithful must obey, the tribunal before which the faithful are judged and to which they have a right to appeal.”

Our Lady of Fatima

The visibility of the Church is also inherent to the Message of Our Lady at Fatima.

First, on July 13, 1917, as part of the ‘Great Secret of Fatima,’ Our Lady told the three shepherd children: “But if they do not stop offending God, another and worse war will break out in the reign of Pius XI…” Clearly, Our Lady acknowledges that the Church is a visible body with a visible head. Her reference to the Pope shows She accepts him as the head of the Church (Her Son’s Mystical Body) on earth and that the Pope has a right to ‘reign.’ She went on to speak further regarding the Holy Father (he will have much to suffer.,.. he will consecrate Russia to Me…) to emphasize the importance of the Church’s visible head.

And of course, all Catholic bishops are to unite themselves with the Pope in offering the Consecration of Russia. Our Lady’s Message of Fatima places the greatest of emphasis on the Church hierarchy. Without their cooperation, there will be no proper consecration of Russia, and hence no conversion of Russia and no world peace.

Then, in June 1944 Sister Lucia prepared two different sealed envelopes for transmission of the Third Secret (to the Bishop of Leiria), each bearing the notation: “By express order of Our Lady, this envelope can only be opened in 1960 by the Cardinal Patriarch of Lisbon or the Bishop of Leiria.”

Thus, these three instances show Our Lady emphasizing the importance of the rightly exercised authority of the legitimate ecclesial hierarchy, one of the three defining elements of the visible Catholic Church

Second, also on July 13, 1917, Our Lady prophesied that “In Portugal, the dogma of the Faith will always be preserved etc.” This famous “etc.’’ that Sister Lucia wrote indicates the rest of the words spoken by Our Lady in the still unrevealed portion of the Third Part of the Secret of Fatima. Here we see Our Lady emphasizing the importance of authentic Catholic dogma, the second defining element of the visible Catholic Church.

Third, in preparation for Our Lady’s visit to the three shepherd children – Lucia, Francisco, and Jacinta – the Angel of Portugal (St. Michael) appeared to them three times in 1916. On his third visit, he adored the Sacred Body and Blood of Our Lord with profound reverence and then administered the Sacrament of Holy Communion to the children. Both St. Michael and Our Lady also emphasized the need to cease offending God, to amend our lives, to repent, and to offer reparation. These necessary actions are intrinsic to the Sacrament of Confession. Thus, we see that the Message of Fatima places great emphasis on the Sacraments as well,[ii] the third defining element of the visible Catholic Church.

While Jesus Christ is the invisible head of the Church, He chose to build His Church on St. Peter. The Church preserves the Faith as taught by the Lord and handed down over the centuries in Her teachings. And She also passes down the ability to confer the Sacraments through Holy Orders. Catholic priests today are ordained in the same line of apostolic succession that can be traced back bishop-by-bishop ultimately to the hand of Christ, Who ordained the Apostles on Holy Thursday at the Last Supper. Thus, it is inaccurate to call ‘Christian’ those who reject this revealed dogma of the Faith.

[i] Obedience has limits. See the video by Fr. Rodriguez for more information on this important fact: “There Are Limits of Obedience to a Pope.” For an excellent and thorough study of this subject we recommend Dr. Peter Kwasniewski’s recent work, True Obedience in the Church (2022).

[ii] The Message of Fatima actually places a great emphasis on all Seven Sacraments. For example, Sister Lucia spoke of how the devil is launching a great assault upon the Holy Sacrament of Matrimony (Marriage and Family). She also spoke of how the devil seeks to corrupt the lives of religious and priests (attacking the Sacrament of Holy Orders), as this is how he most easily saddens Our Lord and drags souls to hell. 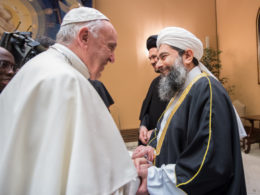 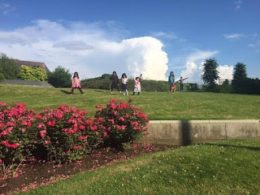 How Can You Afford Eight Kids??

Sometimes we venture out with a few of our children; and sometimes we’re courageous enough to venture out…
byMelissa Pasia 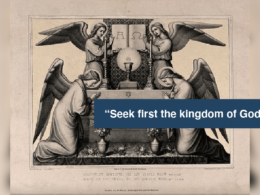 What Is the Eucharistic Fast?

Catholic Apologetics #69 The Authority of Scripture St. Paul admonished those who approach Holy Communion with the purpose…
byMatthew Plese
No comments 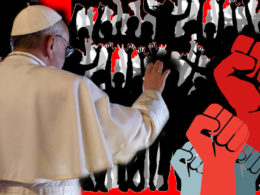