At What Times May Mass Be Celebrated?

The time of day in which the Holy Sacrifice of the Mass may take place is governed by the Church’s law. We read in the 1917 Code of Canon Law: “The beginning of the celebration of Mass shall not occur earlier than one hour before first light or later than one hour after noon” (1917 CIC 821 §1). This law is based on the practice of the Apostles, as well as priests in the early Church, who celebrated the Sacrifice of the Mass in the morning.

Father Shawn Tunink summarized this development in his dissertation on the topic of evening Masses:[1]

“Looking back over the development regarding the day and time of Mass throughout history, the following can be summarized. The first Mass was celebrated in the evening hours on a Thursday. Very quickly thereafter the focus shifted to celebrating Mass in commemoration of the resurrection rather than connecting back to the historical time and day of the Last Supper. This consisted principally in the shift to the placing of the weekly assembly on Sunday. The time for Mass still seems to have varied from place to place and no written restrictions to the morning hours can be found until the time of Pius V in 1566. By 1917, although the law then allowed Mass to be celebrated on every day of the week, the time for Mass was entirely restricted to the morning. This was somewhat of a break with the more fluid history, but seems to have been aimed primarily at maintaining a connection between the celebration of the Eucharist and the morning appearances of Jesus after the resurrection.”

Exceptions for Midnight Mass on Christmas

There are two days in the year in which priests are permitted to trinate[2] (that is, offer three Masses): Christmas Day and All Souls Day. For all priests offering more than three Masses on either day, they should be familiar with the rules for celebrating Mass more than once the same day. See The Celebration of Mass – A Study of the Rubrics of the Roman Missal by Rev. O’Connell, pages 371 – 373 for more information specific to these exceptions.

Christmas midnight Mass, in particular, was governed by a special rubric. Hence, while the time in which Mass may traditionally be said is specified in the 1917 Code of Canon Law as no earlier than one hour before dawn, Canon 821 §2 provided the specific exception for the time of midnight Mass, which is translated as such: “On the night of Christmas, the conventual or parochial Mass alone can be started at midnight, but not otherwise without apostolic indult.”

Father Tunink also cites several examples of indults permitting evening Masses in the mid-1900s, with most of the examples being due to the hardships of World War II. He states with citations:

“In 1941 German bishops were given permission for evening Masses on Sundays and weekdays ‘as need dictated.’ The previously mentioned indult given to Cardinal Suhard was applied to prisoners of war. Finally, American priests who were serving as military chaplains and other priests serving those in the military were given the special permission of celebrating Mass up to 7:30 pm on Sunday and weekdays without exception.”

And in the years after World War II, more prelates sought permission from the Holy See to continue offering Masses in the evening. Yet, one of the chief reasons why Mass in the evening was difficult was the rubrics concerning the ancient Eucharistic fast which remained in force.

One of the primary practical motivators against evening Masses was the immemorial Eucharistic fast. Before the changes by Pope Pius XII in 1953, not even water was allowed to be consumed from midnight until after receiving Holy Communion. This applied to even the priest. Further changes in 1957 mitigated the fast to be for only three hours before Holy Communion from all solid food and all alcoholic beverages. Nonalcoholic beverages were subject to a one hour fast, though water was permitted as stated in Christus Dominus: “In the future it shall be a general and common principle for all, both priests and faithful, that natural water does not break the Eucharistic fast.” Yet sadly, the changes in 1964 reduced the Eucharistic fast to virtually nothing.

Christus Dominus also states that there was no longer a need for bishops to request an indult from the Holy See to permit evening Masses. As Father Tunink states: “The regulation of evening Masses was now left to the discretion of local ordinaries with the few restrictions mentioned. Most notably, such evening Masses could not begin before four o’clock in the afternoon.”

The Changes after Vatican II

This article has thus far considered the traditional practice per the 1917 Code which disallowed by law Mass to be celebrated one hour past noon. By the mid-20th century, various indults permitted Mass to be celebrated in the evening. Yet, it was not until the mid-1960s that, expanding upon this, various bishops began to seek permission for the faithful to satisfy their Sunday obligation of Mass attendance at a Mass celebrated on Saturday evening. Even after clarification was issued in 1964 that Sunday must still be kept as a day free of servile work, the practice of many Catholics no longer matched this reality.

This indult existed in the United States up until the 1983 Code of Canon Law, which states: “The celebration and distribution of the Eucharist can be done at any day and hour except those which the liturgical norms exclude” (1983 CIC 931). The new Code of Canon Law also made the watered-down one-hour Eucharistic fast the universal practice of the Church. The 1983 Law also stated: “A person who assists at a Mass celebrated anywhere in a Catholic rite either on the feast day itself or in the evening of the preceding day satisfies the obligation of participating in the Mass.”

Lost Symbolism of Masses Said During the Morning Only

The changes under the reign of Pope Pius XII to permit Mass and Holy Communion to be celebrated at any time of day without exception – and the watering down of the Eucharistic fast to only one hour for food and alcoholic beverages – has only helped to exasperate the crisis we are in. The seemingly small changes in the mid-1900s quickly escalated to where we are today. Gone are the days when Sunday morning Mass was the highlight of the week. Today, Sunday Mass attendance is seen as just an obligation to fulfill at any time on Sunday (or now in the 1983 Code, even on the Saturday evening prior), and few people even realize that we are still required to keep the entire 24 hours of Sunday as a day of rest from servile works and unnecessary commerce.

And the changes permitting evening Masses have led us to forget the symbolism of Christ as the true Sun Who enlightens us and our day with His radiance. Thus, while there is nothing invalid or evil in permitting a reduced Eucharistic fast or evening Masses, these changes – along with changes to the norms of fasting and abstinence – have only helped accelerate the decline in Catholic practice and devotion in the past few decades. Traditionalists would do well to observe the Eucharistic fast from midnight and to assist at Masses in the morning only. Saturday “anticipatory Masses” should be eschewed altogether.

May St. Joseph help us to better sanctify Sundays once again!

[1] Father Tunink wrote this paper as his dissertation to fulfill the thesis requirement for the Licentiate Degree in Canon Law from Catholic University of America.

[2] The term “binate” refers to the priest having permission to offer two Masses in the same day. These terms (binate and trinate) were developed because the norm in Catholic practice – hallowed by centuries of tradition – is for a priest to only offer one Mass a day. 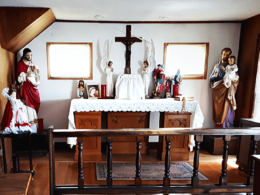 J.M.J. (See Above: Picture of Father Gruner’s Private Chapel) Often at the end of a workday, a few…
byJoanna Swords 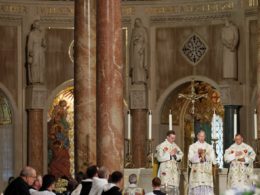 The Role of the Deacon and Subdeacon at the Traditional Mass

For a man on the path to the priesthood, there were four minor orders and two major orders…
byMatthew Plese
No comments 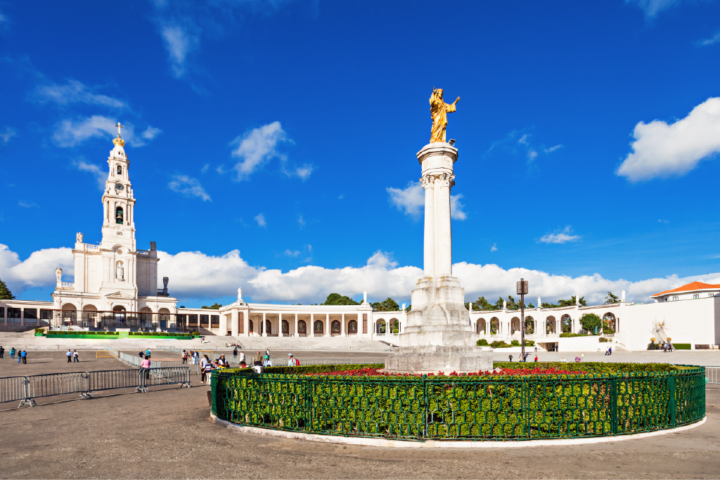