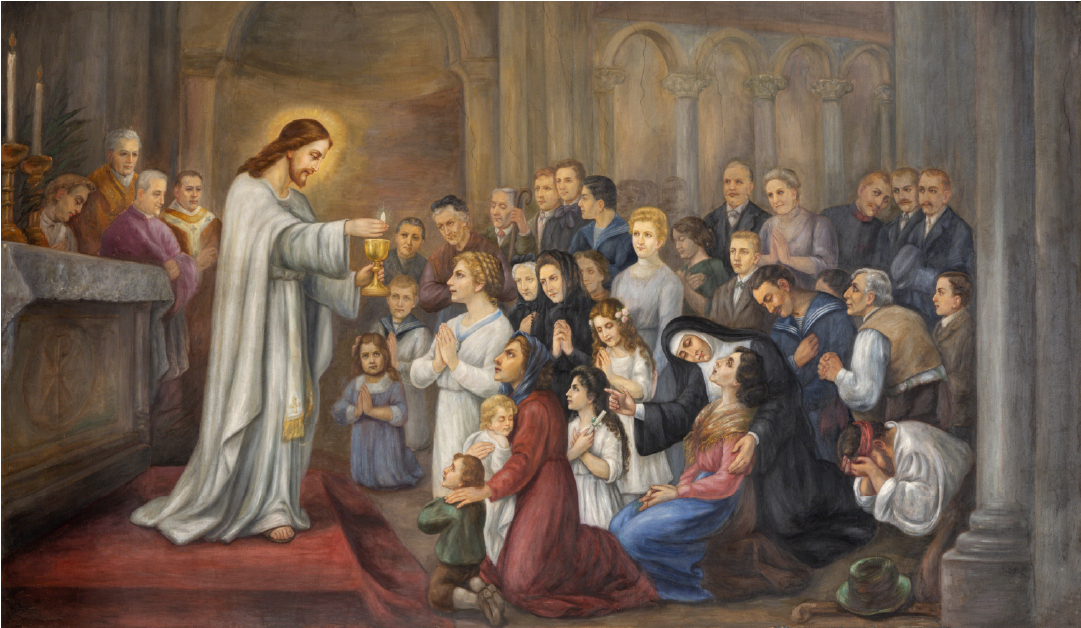 In contrast to ‘ex opere operato’ (previously discussed), the principle ‘ex opere operantis’ literally translates as “from the work of the doer” and is concerned with the role and value of the minister’s “moral condition in causing or receiving sacramental grace” (Catholic Encyclopedia).

The Catholic Encyclopedia details the historical context and theological development of this important principle in sacramental theology.[1] In essence, these two sacramental principles uphold the mystery of grace and of free will, as well as the primary end of God’s action and the requirement of man’s receptivity. God has chosen to give grace through His human ministers [the priests]. He does this despite their unworthiness and sinfulness, so long as they exercise their free will by obeying what He has decreed through His Apostles and the Church. Even a heretical immoral priest will offer a valid Mass if he uses proper matter, form and intent.

Yet, a man’s free will and his dispositions play a crucial role in how God’s grace works in his life. Jesus Christ is truly and entirely present in every Holy Communion (even in the smallest particle). Everyone at the communion rail receives ‘the same Jesus;’ yet, the effects in each person’s life can be very different. The good wrought in a person’s life depends on many factors, including the sanctity of the minister [the priest] and other situational circumstances (which could include the reverence of the rite, the beauty of the location, the example of other Catholics in the pew, etc…). Above all, it depends on the individual recipient, his desire for holiness, his life of prayer, his preparation for the sacrament and thanksgiving thereafter, his detachment from the world, his piety, etc.

Said another way by the Catholic Dictionary of Fr. John Hardon, ‘ex opere operantis’ is “a term mainly applied to the good dispositions with which a sacrament is received, to distinguish it from the ex opere operato, which is the built-in efficacy of a sacrament properly conferred. But it may refer to any subjective factor that at least partially determines the amount of grace obtained by a person who performs some act of piety. Thus, in the use of sacramentals or in the gaining of indulgences, the blessings received depend largely on the faith and love of God with which a sacramental is employed or an indulgenced prayer or good work is performed.”

A Prototypical Example from the Life of Christ

St. Luke narrates the well-known story of a hemorrhaging woman who touched the hem of Jesus’ garment and was healed of her twelve-year-long illness (see Luke 8:42-48). Jesus was in the midst of a huge throng and people were pressing about Him on all sides. When He asked, ‘Who touched me?,’ we can imagine the Apostles reacting, ‘Master, You can’t be serious, everyone is touching You; how does Your question even make sense?’ But there was a difference in how that particular woman had touched the Incarnate God, because virtue [power, grace] had gone out of Jesus. Everyone in the crowd had an illness – some physical, others psychological, and everyone spiritual – but St. Luke recounts how one was healed. Why? It was on account of her great faith and fervor. So, how does this relate to our two sacramental principles?

Jesus Christ – true God and true man – was fully present to all the people in this throng. He did so through the mediation of the human nature He had assumed. This is analogous to ‘ex opere operato.’ For the objective reality was that on that dusty Galilean road, God’s grace-filled presence was in the people’s midst. This did not depend on the personal sanctity, morality, or faith of any of the individuals in the crowd. God was there. God made Himself available to all there. God wanted to give Himself to everyone there. Yet, only one experienced the miraculous effects of His grace on account of her interior dispositions. This is analogous to ‘ex opere operantis.’

We see a wondrous parallel to this Gospel story every time we go to Holy Communion. Consider a crowded basilica where the crowds are streaming forward to kneel at the communion rail. Perhaps it is even a pontifical Mass presided over by the great Pope St. Pius V at the Cathedral of Rome, St. John Lateran. All those who approach receive the Precious Body and Blood of Our Lord (ex opere operato) but not all are healed, not all are turned into saints. As with the bleeding woman in the Gospel, perhaps only a few powerfully experience the effects of God’s grace. This is because each person responds to God’s grace differently, depending on their faith, zeal, piety, etc. (ex opere operantis). Thus, we should each constantly beg God to increase our faith and fervor for Him!

Consequently, the Sacraments by themselves, by the divine virtue they contain, have an essential efficacy, but the measure of grace produced by them varies according to the dispositions of those who receive them.

Taking the Sacrament of Confession as a guide, a penitent should confess his mortal sins sincerely and clearly at the beginning of confession and not allow them to pass unperceived amongst all of his venial sins. Mortal sins must be confessed in number and in kind and cause. They must be confessed along with sincere contrition. Venial sins committed with full deliberation are a serious obstacle to perfection. Fully deliberate venial sin is like a poison that slowly kills an organism. We must also guard against semi-deliberate venial sins, which are committed with less reflection and into which there enters a certain amount of surprise and impulse. Lastly, sins of frailty are committed because of human weakness and the will has only a small share in them. They are atoned for quickly and are not a serious obstacle to perfection, but we must seek to diminish them in number.

The fruits of confession are those of the virtues of humility and penance and especially those of sacramental absolution. These fruits are present in every valid confession. One has to humble himself (confession of sin), sins are forgiven (absolution), and one makes satisfaction (penance). However, the subjective effects of the sacramental grace are always in proportion to the excellence of the dispositions with which the sacrament is received. For example, among twenty people who go to Confession, each receives a different measure of grace, for God discerns the differences in each one’s acts. In fact, the greater the contrition, the greater the grace received. This is why it helps to name a past sin which we deeply hate in every confession, even if it has been years since we committed it. Because the intense contrition we have for that abhorred sin extends to all the sins confessed and the soul becomes more receptive to the sacramental graces granted by God.

Naturally, a general confession of past sins is also effective in order that we might have a greater contrition for sins that have already been forgiven, and which may also diminish the temporal punishments due to these sins.

In general, Catholics tend to know and understand the principles behind ‘ex opere operato’ (even if they don’t know the technical term). In large measure this is because we have to defend it so often against Protestant challenges. And it certainly is important as it lays the solid foundation for our confidence and hope in the infallible efficacy of the Church’s Seven Sacraments. However, perhaps even more important for our personal growth in sanctity is the principle ‘ex opere operantis’; yet, it does not receive nearly the attention it warrants. Let us therefore exert ourselves in doing everything we possibly can to dispose our souls more favorably towards receiving God’s sanctifying grace. This is a most necessary resolution for anyone who wants to grow in sanctity.

Our Lady, Mediatrix of all Sacramental Graces, pray for us!

[1] “Peter of Poitiers (d. 1205) first applied to baptism the distinction between the rite that is performed and the one who performs it. Graphically, he compares an action in the natural order to the sacramental action: ‘When the Jews put Christ to death their deed was evil; but the death of Christ was approved and willed by God’ (Sententiarum libri quinque, 1, c.16). The application of the principle to the Sacraments was logical, and soon followed.

Innocent III (d. 1216) distinguished between sacrilegious action and sacramental celebration: ‘Although the action of the one who acts (opus operans) is sometimes unclean, yet always the act done (opus operatum) is clean’ (De Sacro Altaris Mysterio, 3.6). In the middle of the 13th century, the two formulas were commonly used to point out the difference that exists between Christian Sacraments and Mosaic rites. Actually, the teaching behind the formulas was as old as the doctrine of the objective efficacy of Sacraments, especially of Baptism and Orders, which Augustine (d. 430) developed against Donatism [a heresy], which asserted that Sacraments administered by notoriously unworthy ministers were invalid.

“In the 12th century theologians used the distinction to show that Mosaic rites (with the probable exception of circumcision) conferred grace upon the recipient according only to the measure of his faith and fervor, ex opere operantis; and that, on the contrary, Christian Sacraments confer grace ex opere operato upon the soul capable of receiving it. The Council of Trent (1545–1563) defined the term ‘ex opere operato’ in order to deny the Reformers’ contention that Sacraments caused grace exactly as did the Mosaic rites, but it did not deny that the faith and fervor of the (adult) recipient conditioned the measure of grace received.

“Ex opere operantis ecclesiae. Theologians commonly teach that the only limit to the measure of grace conferred ex opere operato is the degree of faith and fervor in the recipient. This limiting arises, ex opere operantis, from the measure of the recipient’s cooperation at the time of receiving the rite. In the 20th century, theologians began a discussion of the recipient’s cooperation, specifically his genuine intention to participate together with the minister in the sacramental action, as a necessary element in perfecting a Sacrament as a practical sign of grace. This discussion enlarged the meaning of ex opere operantis, and is of particular value in determining precisely the active role of the laity in the offering of Holy Mass.”

[2] This section is heavily based on the writings of Fr. Garrigou-Lagrange in The Three Ages of the Interior Life.