Blessed Be the Name of God: Ways to Live Out the 2nd Commandment

The Baltimore Catechism #3 teaches, “The second Commandment is: Thou shalt not take the name of the Lord thy God in vain. We are commanded by the second Commandment to speak with reverence of God and of the saints, and of all holy things, and to keep our lawful oaths and vows” (Question 345 & 346).

Names are greatly important as Sacred Scripture reveals in Revelations 2:17, 3:5, 3:12, and 22:4. The name given to the Lord, however, is above every other name (cf. Ph. 2:10-11). In the Old Testament, out of respect for the holiness of God, the people of Israel did not pronounce His name that God revealed to Moses in the burning bush (cf. Exodus 3:12). In fact, in the ancient Jewish traditions, every time the name of God was to be written it was always written with a brand-new quill that had not previously written anything else. And after writing God’s holy name, the writer would break the quill in two since it was not worthy to write anything else for there is nothing as holy as the name of God.

In the New Testament Gospels, Jesus’ divine name is mentioned numerous times in Scripture and is worthy of all praise and adoration. Yet, do we treat the name of Jesus Christ with the reverence that we should since He is truly God-made man? I fear not. In fact, so many people use the name of God in vain. Most of the world today – even modern Catholics – blaspheme the holiest of all names by using the name of Jesus in cursing or to show shock. Such sins demand reparation.  Are you willing to pray acts of reparation for such offenses?

Head Bows at the Name of Jesus

Truly, no name deserves more respect than the Redeemer’s own name. And Catholics are bound to bow their heads at the Holy Name of Jesus. The practice of bowing the head at the mention of the Holy Name was formally written into the law of the Church at the Second Council of Lyons in 1274 AD:

“Those who assemble in church should extol with an act of special reverence that Name which is above every Name, than which no other under Heaven has been given to people, in which believers must be saved, the Name, that is, of Jesus Christ, Who will save His people from their sins. Each should fulfil in himself that which is written for all, that at the Name of Jesus every knee should bow; whenever that glorious Name is recalled, especially during the sacred Mysteries of the Mass, everyone should bow the knees of his heart, which he can do even by a bow of his head.”

Additionally, the bow of the head is also to be made at the mention of the Holy Name of Mary as well as when the name of the saint in whose honor the Mass is being offered. And additionally, when the Holy Trinity is mentioned by name (Father, Son, and Holy Ghost), a bow of the head is also required. Therefore, we should bow our heads during the Gloria Patri prayer whether during Mass, while saying the Rosary, or at the end of the Psalms in the Divine Office. And we should teach our family members to do likewise.

The Congregation for Divine Worship and the Discipline of the Sacraments has made this point as well. Concerning the due reverence prescribed by the Church, Bishop Arthur Roche of Leeds concurs when he writes:

“It is part of our Catholic tradition that we offer reverence not just with the words on our lips but through actions such as a bow of the head. This bow is made whenever the Holy Trinity are named together, for example, in a doxology, and at the names of Jesus, of the Blessed Virgin Mary, and of the Saint in whose honor Mass is being celebrated.”[1]

Reverential capitalization refers to the traditional practice of capitalizing any pronouns that refer to God: either to the Blessed Trinity or any of the Divine Persons.  Unfortunately, while this has long been done, it has fallen by the wayside in some languages including our own. In the 19th century it became commonplace in English to capitalize all pronouns that refer to Almighty God but by the 20th century this has waned. Today, different writing styles and schools of thought vary. The Chicago Manual of Style and the Associated Press Stylebook for instance do not use reverential capitalization. However, the US Government Printing Office Style Manual (2008) does use it.

We can do our part by capitalizing such pronouns (e.g. He, Him, His, My, Himself, etc.) in any of our writing – no matter how informal. This is something you can and should start doing immediately out of respect for the Lord’s Holy Name.

In our world when so many people use the name of the Savior in curses or in exclamations of surprise, pain, or anger, we must do our part in atoning for these grave sins against the Second Commandment. When we hear such offenses, we should instruct the blasphemer to cease unless it is probable that by doing so, he will only increase his blasphemous use of Our Lord’s Name. One strategy we can use is whenever someone exclaims “Jesus” in a vain way to say “have mercy on us” or a similar line. In so doing, we turn this into a prayer, and this example can often be better at changing the other’s behavior than outright scolding them for it.

Furthermore, we can make an Act of Reparation for Blasphemies Uttered against the Holy Name of Jesus, pray the Divine Praises, or pray the Golden Arrow prayer. This prayer was given to Sister Mary of St. Peter in an apparition by Our Lord Himself in France in August 1843. Sister Mary said of this prayer that it is “an Act of Praise that Our Lord Himself dictated to me, notwithstanding my unworthiness, for the reparation of Blasphemy against His Holy Name.”

May the Golden Arrow prayer be on our nightstands as we, the members of the Church Militant, are implored to ever increase our acts of reparation for the proliferation of sin in the world. The text of this prayer is as follows: “May the most holy, most sacred, most adorable, most incomprehensible and unutterable Name of God be always praised, blessed, loved, adored and glorified in Heaven, on earth, and under the earth, by all the creatures of God, and by the Sacred Heart of Our Lord Jesus Christ, in the Most Holy Sacrament of the Altar. Amen.”

Similarly, the Divine Praises were originally written in Italian by Father Luigi Felici in 1797 for the purpose of making reparation after saying or hearing sacrilege or blasphemy. And they can be a powerful remedy today to help repair the injustice to our Divine Redeemer whose name is so neglected, blasphemed, and mocked.

Lord Jesus, have mercy on us!

The Synod as the Arm of Leviathan

Fatima Perspectives #1247 Over the past five years, Jorge Mario Bergoglio, as Pope Francis, has perfected the modus…
byChris Ferrara 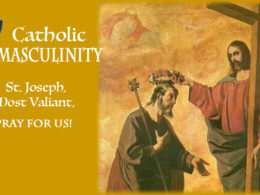 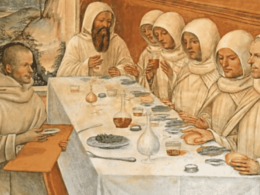 Read the previous article: Fasting in the Early Church (Part 2) Introduction Continuing our series on fasting, we…
byMatthew Plese
72 shares
68
0
4
No comments