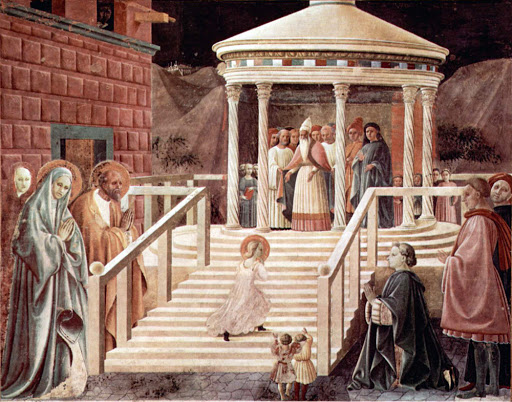 The Gradual Psalms are 15 of the Psalms (i.e., Psalms 119-133) which are prayed in three sets of five, along with a few additional prayers between each set. The Gradual Psalms were developed as a Supplementary Office to the Divine Office, for the purpose of praying for the dead.[1] They are traditionally prayed before Matins, the Office that is prayed in the middle of the night or very early before sunrise.[2]

The main Supplementary Offices are those of the Dead, the Blessed Virgin Mary, the Gradual and Seven Penitential Psalms, and the Litany of the Saints.[3] For centuries, they were required to be prayed at certain times by those bound to pray the Divine Office. This was the case until 1911 when Pope St. Pius X removed the obligation entirely. Before this change, in the Tridentine Breviary the Gradual Psalms were obligatorily prayed before Matins, starting on Ash Wednesday and continuing every Wednesday of Lent whenever the Office was of the Lenten Feria[4] (i.e., when it was not a feast day that takes precedence over the feria). Even outside of Wednesdays in Lent, the Gradual Psalms are a rich tradition that all Catholics may pray.

What Are the Gradual Psalms?

The human origins of these prayers, like the rest of the psalms, are shrouded in history. Ancient traditions ascribe the authorship of many psalms to King David. Some scholars have speculated that these prayers were sung when the Temple of Solomon was consecrated (~960 B.C.). Others have posited that the Levitical priests would pray them as they ascended the fifteen steps to minister in the Temple. Still others conjecture that they were sung when the walls of Jerusalem were rebuilt under the priest Ezra and the governor Nehemiah (~450 BC). And a common opinion is that pilgrims going to Jerusalem for the major feasts would pray them as they ascended the road leading to the holy city. Naturally, none of these theories are mutually exclusive. It certainly makes sense that they could all be true since all these usages have an intrinsic connection. Yet, regardless of their human origin and ancient Old Testament use, faithful Catholics know they are inspired by the Holy Ghost (their Divine Author) and faithfully pray them in accordance with the traditions established by Holy Mother Church.

On their history and development, the author of Psallite Sapienter states:

“Praying the fifteen Gradual Psalms (so called because they mark the steps, as it were, of the pilgrims to the Temple of old; mystically, they signify the active life, the ascent of the soul toward God, and progress in the spiritual life) is an ancient, even a pre-Christian devotion – it is said that Holy Mary prayed them in this manner when she came into the Temple, she who is the model of all Christians and the image of Holy Church… [This event in the life of Our Lady is depicted in the image above.]

“By the early Middle Ages, these Gradual Psalms came to be recited in choir before Matins; St Pius V removed the obligation to do so out of choir, and St Pius X removed the remaining choral obligation (which was to say them on Wednesdays in Lent, except in Holy Week or on feasts of nine lessons). However, to pray them is of course laudable, and Pius V himself, in 1568, granted an indulgence to their use (originally equivalent to fifty days’ canonical penance on the days prescribed in the Breviary for their use in choir, and forty days’ otherwise, but increased to seven years in 1932) – even to-day they are still explicitly indulgenced prayers. According to the Breviary, they are divided into three groups of five psalms, each group followed by a Pater, versicles and Collect.”

To those who are looking for an extra form of penance, especially involving prayers said during the night, the Gradual Psalms should not be overlooked. Next time you have trouble sleeping, take some time to offer these prayers and participate in a Catholic tradition that our forefathers in the Faith practiced.

Why Pray the Gradual Psalms

First, the Church attaches an indulgence to the praying for the Gradual Psalms. So if you are looking to make restitution for sins (either yours or those of your family or friends), you may do so by praying these Psalms if you are in the state of grace.[5]

Third, by taking on penance (e.g., waking up in the middle of the night to offer these prayers), we help fulfill the request of Our Lady of Fatima for more penance for souls.

Want to pray the Gradual Psalms tonight for the faithful departed? Pick up a copy of your Bible and print out this short page, which mentions the Psalms needed and the short prayers between the sets. It’s a simple devotion to pray if only you make the time for it.

[1]  Thus, in the Breviary, the Gradual Psalms are placed immediately after the Office of the Dead, which is another of the Supplementary Offices.

[2]  For more on the Hours of the Divine Office, a brief summary for those who need an introduction may be read at https://fatima.org/news-views/living-a-liturgical-life-the-divine-office/

[4]  For those of you with 1962 or older Roman Catholic Daily Missals, you may have been surprised to see that each day of Lent has its own Mass propers – Introit, Collect, Scripture readings, Offertory, Communion, Postcommunion, etc. Dom Guéranger explains: “Each feria of Lent has a proper Mass; whereas, in Advent, the Mass of the preceding Sunday is repeated during the week. This richness of the Lenten liturgy is a powerful means for our entering into the Church’s spirit, since she hereby brings before us, under so many forms, the sentiments suited to this holy time… All this will provide us with most solid instruction; and as the selections from the Bible, which are each day brought before us, are not only some of the finest of the sacred volume, but are, moreover, singularly appropriate to Lent, their attentive perusal will be productive of a twofold advantage.”

[5]  For a more thorough treatment of indulgences, see https://fatima.org/news-views/catholic-apologetics-49/