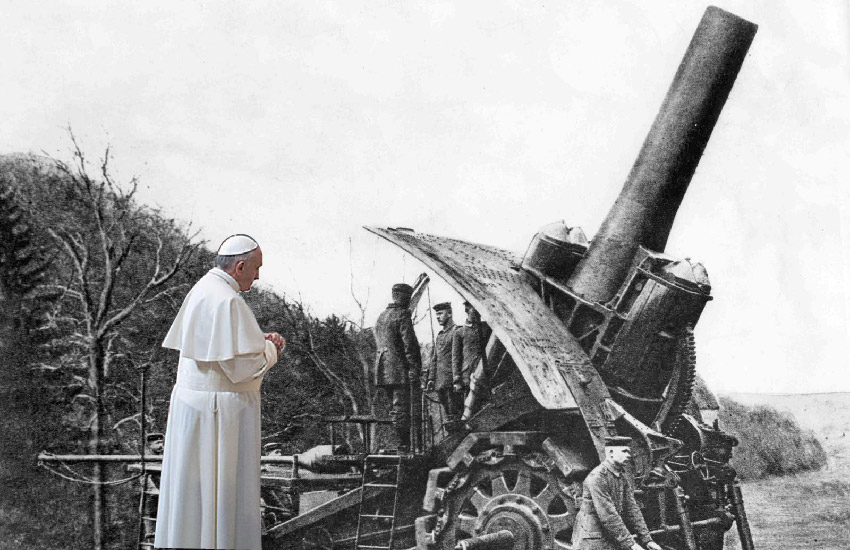 Pope Francis’ Assault on the Latin Mass: Here is his Big Bertha.

As the dust settles following publication of the laughably entitled Traditionis Custodes (“Guardians of Tradition”), we find that numerous bishops are well disposed to allowing Latin Mass communities to continue as before, despite Pope Bergoglio’s obvious (and truly laughable)  intention to eventually abolish the traditional Latin Mass altogether. As Francis puts it in his explanatory letter to the worldwide episcopate, his aim is to ensure that the bishops are guided by the “need to return in due time to the Roman Rite promulgated by Saints Paul VI and John Paul II…”

That is, if this Pope has his way, every Catholic will end up in the pews of the Novus Ordo, which have been emptying steadily over the past fifty years of “liturgical renewal” — a process of abandonment of divine worship that has only been accelerated by the same Pope’s outrageous demand that Catholics follow the draconian dictates of public authorities that have closed the churches while keeping the abortion mills open. Many of the few remaining faithful of the Novus Ordo, barred from their churches by government dictate, will never return.

Happy to say, most American bishops have already indicated that the Latin Mass revival will continue in their dioceses, Traditionis Custodes [TC] notwithstanding. Bishop Paprocki of Springfield Illinois has even gone so far as to dispense from TC’s purported ban on Latin Masses in parish churches, citing Canon 87 and declaring that two established parish Masses will continue as before. Under Canon 87, the bishop has the authority to “dispense the faithful from universal and particular disciplinary laws issued for his territory or his subjects by the supreme authority of the Church.”

Sad to say, however, Pope Bergoglio has planned for the possibility that TC will become a dead letter in most dioceses. In Article 7 of TC, he wheels out a Big Bertha that, at least according to plan, will ensure the piecemeal and eventually total demolition of Latin Mass communities of any kind in the Catholic world. Here it is:

“The Congregation for Divine Worship and the Discipline of the Sacraments and the Congregation for Institutes of Consecrated Life and Societies of Apostolic Life, for matters of their particular competence, exercise the authority of the Holy See with respect to the observance of these provisions.”

The Congregation for Divine Worship (CDW) is headed by Cardinal Arthur Roche, a notorious enemy of the Latin liturgical tradition. The Congregation for the Institutes of Consecrated Life and Societies of Apostolic Life (CSAL) is headed by Archbishop José Rodríguez Carballo, formerly the Secretary of the CSAL. Under the CSAL’s former head, João Cardinal Braz de Aviz (now a member of the Congregation for Bishops), Rodríguez, as Vaticanist Marco Tosati recalls, was busily engaged in the relentless destruction of “good traditional communities,” including  the Franciscan Friars of the Immaculate (FFI), the Family of the Incarnate Word, and the Heralds of the Gospel.

The CDW and the CSAL together now have the power, by issuing decrees directly from the Vatican, to wreak havoc on the still-existing traditional Latin Mass communities, including the Priestly Fraternity of Saint Peter, the Institute of Christ the King, and the Canons Regular of Saint John Cantius. Vatican dictates could well be issued commanding use of the new Lectionary (a jumbled assortment of horribly translated readings that destroys the traditional liturgical calendar), lay readers, Communion in the hand, altar tables instead of high altars, or any other command that would hasten the day when, as Francis hopes, every Catholic who still attends church will have been herded into the liturgical disaster area of the Novus Ordo. Worse, the CSAL can now conduct “visitations” of traditional seminaries in order to ensure the elimination of their traditional formation of priests, as was done during the process of dismembering the FFI and their sister organization of nuns, the Franciscan Sisters of the Renewal.

Pope Bergoglio’s Big Bertha is locked and loaded. We can only watch, hope and pray that the Latin Mass will be delivered from his clutches before he is able to inflict irreparable damage on the communities that still strive to preserve “the most beautiful thing this side of Heaven.”

Note: The term “Big Bertha” originated during World War I. It was the nickname of an unusually large and powerful siege howitzer used by the Imperial German Empire.