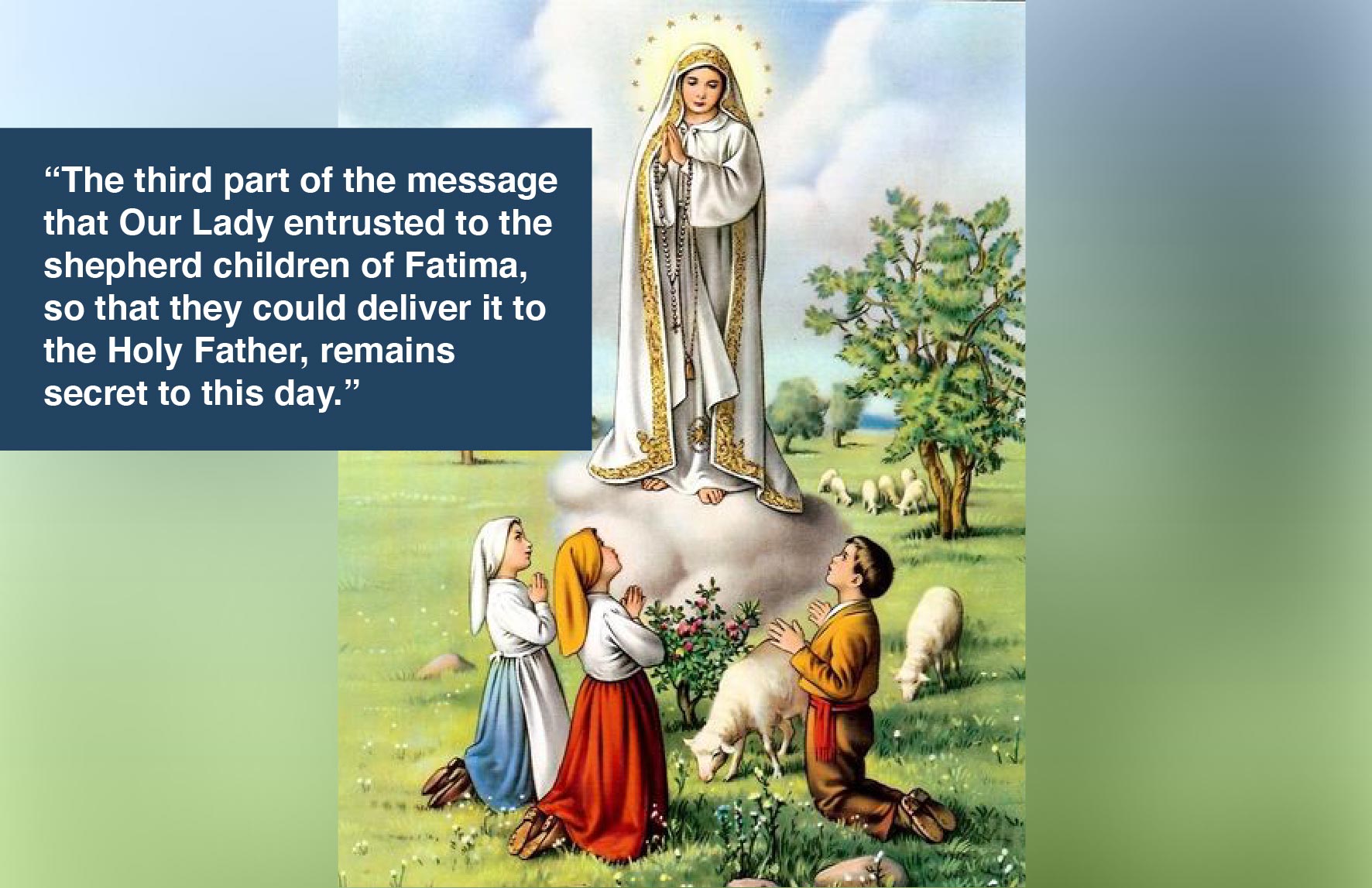 With each passing day, the pontificate of the man from Argentina becomes an increasingly bizarre exhibition of a dysfunctional “Church of Vatican II” with Francis now declaring, in all seriousness, that the Wuhan virus epidemic is “nature… throwing a tantrum so that we will take care of her.” This is a pontificate in which we see the Pope, on Easter Sunday, publishing a letter filled with Leftist cant in which there is not the slightest mention of Christ.

It is more and more evident that the unparalleled situation in which the Church now finds itself must have been foreseen by the Blessed Virgin in that portion of the Third Secret of Fatima we have yet to see, that being the Virgin’s own explanation of the post-apocalyptic vision published by the Vatican on June 26, 2000 along with a ludicrous “interpretation” by the corrupt Cardinal Sodano that only made it more apparent that something is missing. According to Sodano, the vision of a future Pope being executed by a band of soldiers outside a devastated city filled with the dead means John Paul II not being killed by a lone assassin in the intact city of Rome in 1981.

And now Archbishop Carlo Maria Viganó, whose just criticisms of the current occupant of the Chair of Peter are known to the whole world, has given voice to what millions of the faithful believe, and what Father Nicholas Gruner was among the first to proclaim to widespread scorn by the “enlightened” ones in the Catholic commentariat. In an interview with the Portuguese Catholic journal Dies Irae (“Day of Wrath”), the Archbishop declares that the Vatican has suppressed that part of the Secret which foretells apostasy in the Church under the governance of those who have laid waste to the vineyard in the name of the Second Vatican Council.

Inside the Vatican has provided a translation of this historic interview in which the Archbishop puts the matter just as clearly as Father Gruner did:

“The third part of the message that Our Lady entrusted to the shepherd children of Fatima, so that they could deliver it to the Holy Father, remains secret to this day. Our Lady asked for it to be revealed in 1960, but John XXIII had a communiqué published on February 8th of that year in which he stated that the Church ‘does not wish to take on the responsibility of guaranteeing the truthfulness of the words that the three shepherd children said the Virgin Mary spoke to them.’ With this distancing [of the Vatican] from the message of the Queen of Heaven, a cover-up operation was started, evidently because the content of the message would have revealed the terrible conspiracy against the Church of Christ by its enemies….”

Taking aim at the ridiculous “Sodano interpretation,” Archbishop Viganó echoes what Father Gruner said the moment the “cover-up operation” began and while it was being carried forward by Sodano’s successor, Cardinal Bertone. Note the interesting detail about another Marian apparition:

“In 2000, during the pontificate of John Paul II, Cardinal Sodano presented as the Third Secret a version of his own that in several elements appeared clearly incomplete. It is not surprising that the new Secretary of State, Cardinal Bertone, sought to draw attention away to an event in the past [the assassination attempt on John Paul on May 13, 1981] to cause the people of God to believe that the words of the Virgin [in 1917 when She appeared] had nothing to do with the crisis of the Church [in the decades after 1960] and the marriage of modernists and Freemasonry that was contracted behind the scenes at the Second Vatican Council (1962-1965). Antonio Socci, who has carefully investigated the Third Secret, unmasked this harmful behavior on the part of Cardinal Bertone. In addition, it was Bertone himself who heavily discredited and censured the Madonnina delle Lacrime (Madonna of Tears) of Civitavecchia, whose message perfectly agrees with what she said at Fatima.”

Taking aim at ecumenism, the very core of the “Church of Vatican II,” the Archbishop launches this searing accusation in the context of the radical decomposition of the mainline Protestant sects: “But it is clear that the ecumenical ‘pretext’ — that is, drawing closer to dissident communities by acquiring even their most recent errors — is based on Satan’s hatred for the Priesthood and would inevitably lead the Church of Christ to ruin.”

With this pontificate, says the Archbishop, we are witnessing an attack on ecclesiastical celibacy, the “attempt to introduce a form of ordained female ministry” and in general an “approach to the Church’s dogmas [that has] adopted the so-called ‘situation theology,’ whose theological pillars are accidental facts or subjects: the world, nature, the female figure, young people… This theology does not have God’s immutable and eternal truth as its founding center; on the contrary, it starts from the observation of whatever is the current pressing need of these phenomena in order to give answers that are consistent with the expectations of the contemporary world.”

A deformed and monstrous creature that does not come from God! The harshest possible description of the outcome of the post-Vatican II crisis in the Church. But have we not reached the point where that assessment is undeniable? Surely no reasonable observer could deny that the great Popes of the pre-conciliar epoch would look upon the current state of the Church, and its current earthly head, with terrified incomprehension.

What Father Gruner first proclaimed twenty years ago should be regarded as self-evident. The truth will surface even in the midst of the worst crisis in Church history, especially when the source of that truth is the Mother of God Herself.